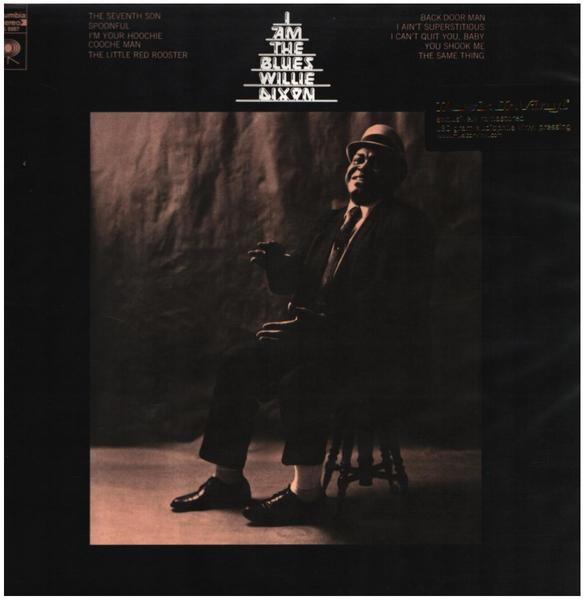 I Am The Blues

I Am the Blues is the sixth studio Chicago blues album released in 1970 by the well-known bluesman Willie Dixon. It is also the title of Dixon's autobiography, edited by Don Snowden.

The album features songs written by Dixon and originally performed by other artists for Chess Records.

Four of the nine songs on I Am the Blues – "Back Door Man", "Spoonful", "I Ain't Superstitious", "The Little Red Rooster" – were originally performed by Howlin' Wolf. "Back Door Man" and "Spoonful" were recorded by Howlin' Wolf in June 1960 featuring bass work by Willie Dixon, piano work by Otis Spann, drum work by Fred Below, and guitar work by Hubert Sumlin. "The Little Red Rooster" was recorded in June 1961 with guitar work by Howlin' Wolf and Hubert Sumlin, piano work by Johnny Jones, bass work by Dixon, and drum work by Sam Lay. "I Ain't Superstitious" was recorded in December 1961 with Howlin' Wolf, Hubert Sumlin, and Jimmy Rogers on guitar, Henry Gray on piano, Willie Dixon on bass, and Sam Lay on drums.[2]

The songs "You Shook Me" and "I'm Your Hoochie Coochie Man" were first recorded by Muddy Waters. "I'm You Hoochie Coochie Man" was recorded on January 7, 1954 with Waters on vocals and guitar, Little Walter on harmonica, Jimmy Rogers on guitar, Otis Spann on piano, Willie Dixon on bass, and Fred Below on drums.[3] "You Shook Me" was recorded on June 27, 1962.

"The Seventh Son" was recorded by Willie Mabon in 1955. "I Can't Quit You, Baby" was not even released on Chess Records; instead it was recorded and released by Otis Rush on the Cobra record label.