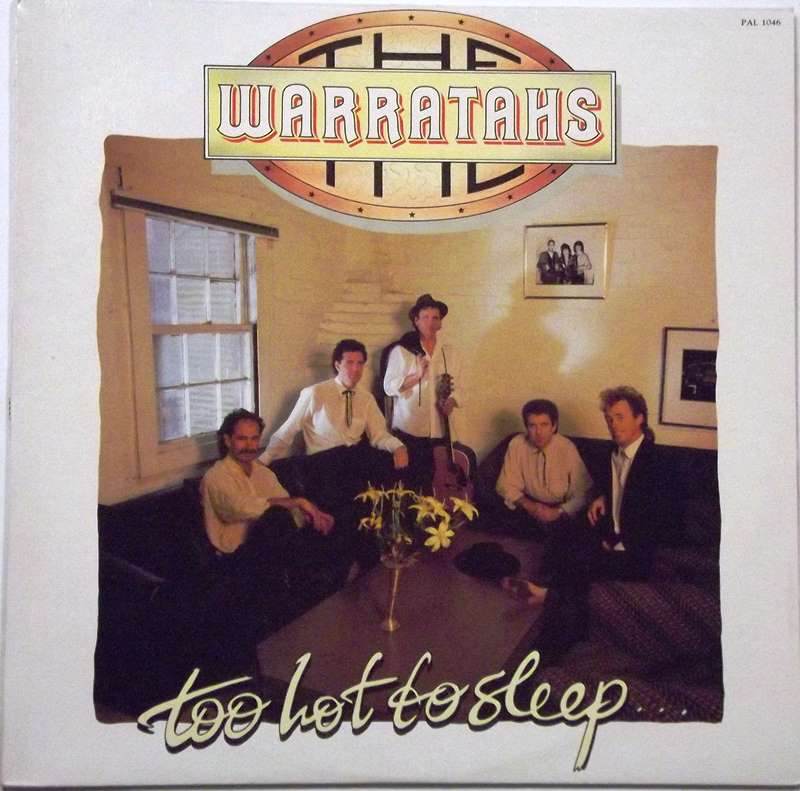 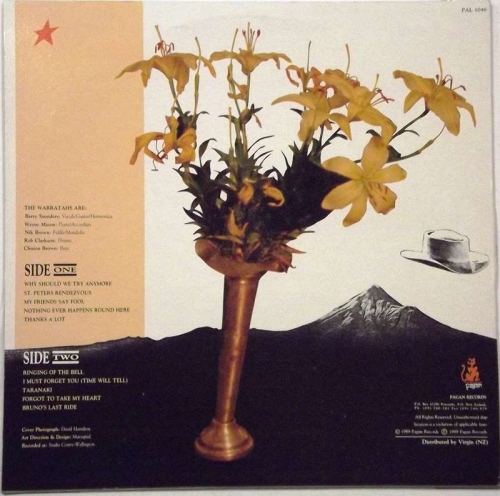 Too Hot To Sleep

A very nice package both vinyl and cover in great condition.

The Warratahs were formed in Wellington in 1985.

Back in 1987 the Warratahs played what turned out to be the first of many nights at Wellington’s Cricketers Arms Hotel. The band had a life of its own right from the start. Playing covers of Jimmie Rodgers, Hank Williams and Hank Snow songs, plus a handful by their own pair of ace songwriters, Wayne Mason and Barry Saunders, they quickly found they had an audience ready and willing to listen. The Warratahs soon established a unique sound, with a stripped back band playing a brand of country/folk that had a sense of the fire and passion of 1950’s rock’n’ roll.

Mason provided piano and accordion, Clint Brown the bass and Rob Clarkson was on drums, but the band has long been based around Barry’s voice and guitar and Nik Brown’s fiddle. This gifted pairing has remained the root of the Warratah’s sound and the core of the band who have seen their profile and popularity repeatedly wax and wane, but, a quarter century later, never slip away.

The current line up has Saunders on vocals, guitar and harmonica, Brown on violin and mandolin, Maurice Newport on drums and Nick Theobald on bass and vocals. The band has, at different times, also featured other well known names including Sid Limbert and Al Norman.

They first recorded Hands Of My Heart, a song written by both Wayne Mason, and Barry Saunders in the Radio NZ studios, with Dick le Fort as producer and Neil Maddever engineering. It was different to anything else around at the time and got extensive radio play. It was also a Silver Scroll finalist. The band signed to Trevor Reekie’s Pagan Records.

Recorded in just a few days, the first album ‘Only Game in Town’, spent months in the charts and produced two classic and enduring hit songs, Hands Of My Heart and Maureen. Their immeasurably valuable ‘of-the-people’ music credentials were firmly stamped with a clutch of prizes at the 1987 Gore Golden Guitar Awards.

The band toured extensively from their base – Barry and Wayne’s house in Austin St, Mount Victoria. The road seemed a natural home for the music, so much so that, when they left on the first tour they left the front door wide open and all the gas rings on. They came home to a very warm house – and a title for the next album, ‘Too Hot To Sleep’!

The two singles from that 1988 album were St Peter’s Rendezvous (for which Barry won Songwriter of the Year), and Bruno’s Last Ride, a harmonica-driven instrumental. In 1991 the band toured with Billy Joel and a couple of years later with The Highwaymen and Johnny Cash and the Carter Family.

Several trips to Australia over the next two years, mostly to Sydney and Melbourne, led to a point where the band had to decide on which side of the Tasman to live. Since the music seemed to belong here, they stayed in NZ.
“Touring in Australia was so hard, the distances so great, that it’s really hard work and, at the end of the day, our home was here. So it wasn’t a difficult decision to make really,” recalls Barry.

Eight years of touring round the country and recording had succeeded in making the band a household name – helped in no small way by one of their songs being used on the TV ad for the Interislander ferry. But the band members by now needed some space. Wayne left and Clint Brown moved overseas. Barry recorded the first of a number of solo albums and the Warratahs didn’t play together for a couple of years.

In 1999 they hit the road again, with Sam Hunt joining them, on the ‘Drivin’ Wheel’ tour, and they found their following was as strong as ever. Invited to play the Tamworth Music Festival in Australia they were a hit with audiences playing songs from their new album ‘One of Two Things’, which included the single Rescue Me.

And now in 2012, it’s interesting that the music the band makes is still as popular as ever. Barry reckons that the answer lies in the fact that, while it may not be fashionable music and “…flavour-of-the-month radio fodder”, the music they play is never out of fashion. In fact, it’s probably fair to describe it as being timeless, and will quite possibly be played on whatever music format is around 25 years from now.

It also helps that the songs Barry crafts are based on real life experiences and feelings. They may, in many ways, be very personal statements by him but the emotions involved can be readily identified by the wide range of people who make up their audience.

This year they celebrate 25 years as a band, marking it with the April release of a 5-track EP featuring a new single, Kupe’s Tears and another song produced by Craig Terris, of Cassete fame, and a re-mastered 19-track Warratahs’ collection – both out on Ode Records.
“There’s also a new video for the single, made by filmmaker Brian Culy,” Barry enthuses.

He seems genuinely happy with the way this has turned out, a great song enhanced with a really interesting and gritty black and white cinematic experience.
“I’m really looking forward to getting back on the road again to play the songs live again. We’ve got gigs lined up in Wellington, Stratford, the Masonic in Auckland, Blenheim, Geraldine and Christchurch. So it should be a blast to get out there in front of an audience again.”