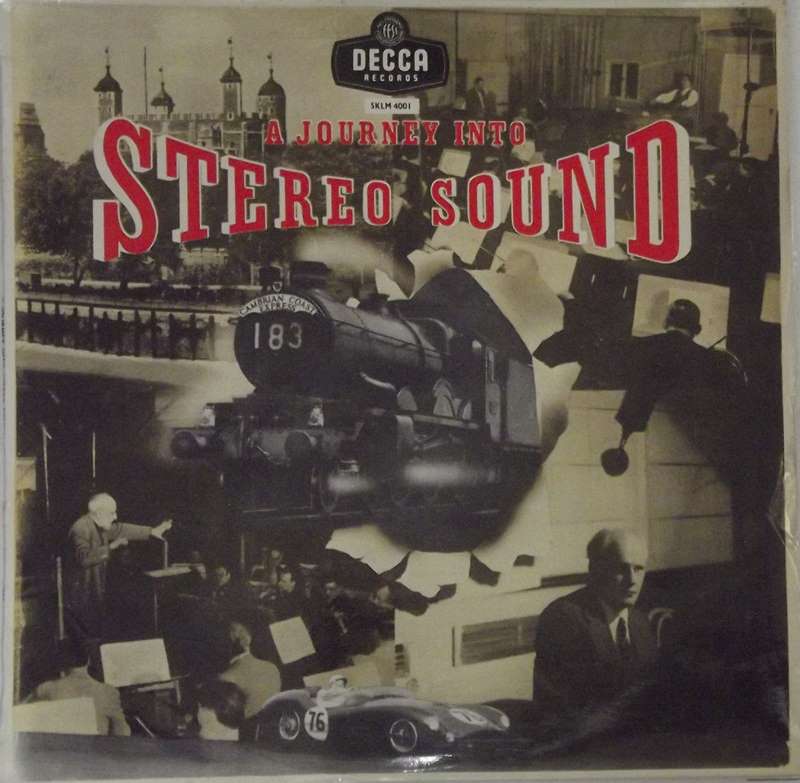 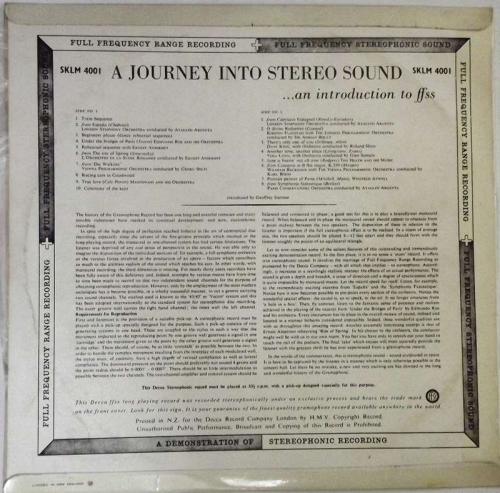 A Journey Into Stereo Sound

Just for a moment, think back to the Coldcut remix of Eric B & Rakim's Paid In Full and the vocal sample that leads off the track, "this is a journey into sound...a journey which along the way will bring to you new color, new dimension, and new values..."

With a minimal amount of research you will find that the sample comes from Geoffrey Sumner's Train Sequence and it's fairly easy to find abridged versions of this cut on sample compilations as well as battle records. Well kids, as my last post of the night, I offer you the full length album of A Journey Into Stereo Sound which leads off with none other than Geoffrey Sumner's Train Sequence!
Initially released in 1958, the main purpose of this album was to demonstrate stereophonic sound by means of high-fidelity, dual-channel recordings. Back in these days, stereo as we know it was still somewhat of a new kid on the block as just about every commercial audio recording had been done in mono on one single channel. Up until this point, if you wanted to hear the true dynamics and bandwidth of an orchestra, you would need to physically be there at the concert hall...
To showcase this new technology, several major labels began releasing albums with passing trains, race cars, and other extreme sound effects that took advantage of the left-to-right or the 360° full spectrum sound field. A Journey Into Stereo Sound followed that trend, but also added big-band and classical music that featured (in some cases) extreme examples of stereo placement along with narration and explanation by Geoffry Sumner. It's funny in a way because for the past 21 years, I have only heard this man talk about this journey into sound, but come to find out that he has A LOT more to say...
I highly suggest that you download this for if nothing else, the pure nostalgic value.
1. Geoffrey Sumner - Train Sequence
2. Geoffrey Sumner - Espana
3. Geoffrey Sumner - Beginners Please
4. Edmundo Ros - Under The Bridges Of Paris
5. Geoffrey Sumner - Rehearsal Sequence
6. Stravinsky - Rite Of Spring
7. Wagner - The Walkure
8. Geoffrey Sumner - Racing Cars At Goodwood
9. Mantovani - True Love
10. Geoffrey Sumner - Ceremony Of The Keys
11. Rimsky Korsakov - Capticcio Espanol
12. Kirsten Flagstad - O Divine Redeemer
13. Dave King - There's Only One Of You
14. Vera Lynn - Another Time, Another Place
15. Ted Heath - June Is Bustin' Out All Over
16. W. A. Mozart - Concerto In Bb Minor
17. Winifred Atwell - Portrait Painter Of Paree
18. Hector Berlioz - Symphonie Fantastique