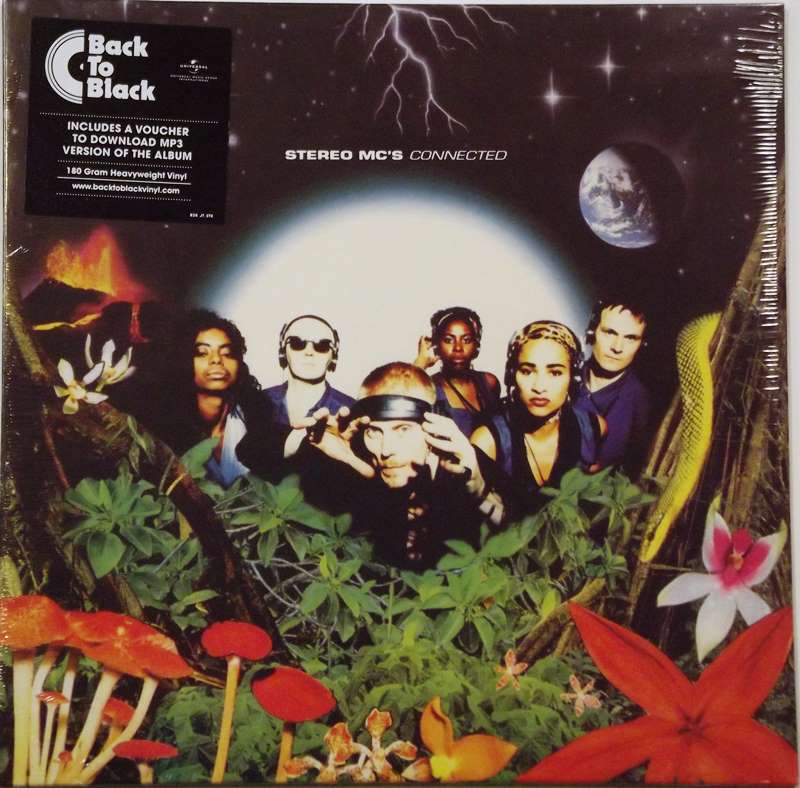 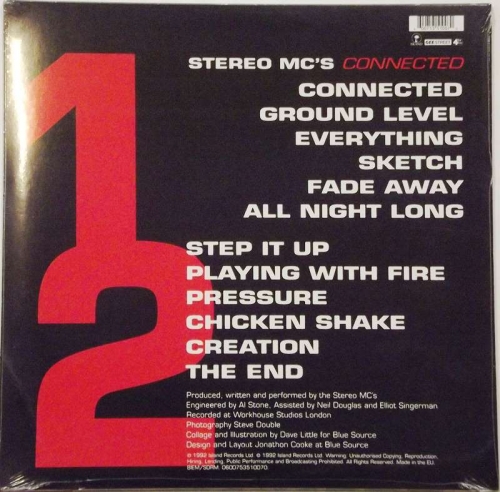 Sealed brand new 180 gram album with free digital download. Made in the EU.

Connected is a 1992 album by Stereo MCs. The tracks "Connected", "Ground Level", "Step It Up" and "Creation" became hit singles; "Connected" was particularly famous for its use in adverts for the Carphone Warehouse.

Stereo MCs are a British hip hop/electronic dance group, which formed in Clapham, London, in 1985.[1] They are best known worldwide for their 1992 transatlantic Top 20 hit single, "Connected". The book Guinness Rockopedia described them as "the big boys of British rap".[2]

Vocalist Rob Birch and DJ/producer Nick Hallam founded their Gee Street recording studio and record label with money they were given to leave their London flat[1] and, dispensing with using a backing band, travelled to early gigs on public transport.[2]

When Gee Street attracted the attention of 4th & Broadway, they recorded the debut Stereo MCs' album 33-45-78 (1989) on a shoestring budget with DJ Cesare, drummer Owen If and backing vocalist and Cath Coffey.[1] In 1990, "Elevate My Mind" by the Stereos was the first British hip hop single to reach the US R&B chart.[2] Having supported the Happy Mondays on a US tour, in the emerging UK alternative dance scene, it took an alliance with the Jungle Brothers, to ensure chart success for Supernatural (1990).[1] Remix work for U2, PM Dawn, Queen Latifah, The Disposable Heroes of Hiphoprisy, Monie Love and Electronic all followed.[2]

Their live band included singers Andrea Bedassie and Verona Davis,[1] and they were one of the few hip hop outfits to play rock music festivals at the time.[2] 1992's mainstream breakthrough Connected, a UK Albums Chart # 2, contained the hit singles "Connected", "Step It Up", "Creation", and "Ground Level" and won them BRIT Awards for Best Group and Best Album.[1] Hallam and Birch then created the music publishing firm, Spirit Songs, which signed Finley Quaye.[2]

However the follow-up to Connected did not appear for almost a decade. Further remix duties for Madonna ("Frozen"), and the Jungle Brothers ("Jungle Brother") in 1998, kept the Stereo MCs name in the limelight.[2] Madonna went on to use the Frozen remix on her 2001 "Drowned World Tour".[citation needed]

In 2000, they released a DJ mix for Studio !K7's DJ-Kicks series and remixed another song for Madonna, ("Music"). The following year saw the release of Deep Down & Dirty, followed by a tour, including slots opening for the recently re-united Jane's Addiction.

Their sixth studio album, Double Bubble, was released in July 2008, followed by their seventh, Emperor's Nightingale in August 2011. In December 2008, they supported Madness at the O2 Arena in London.