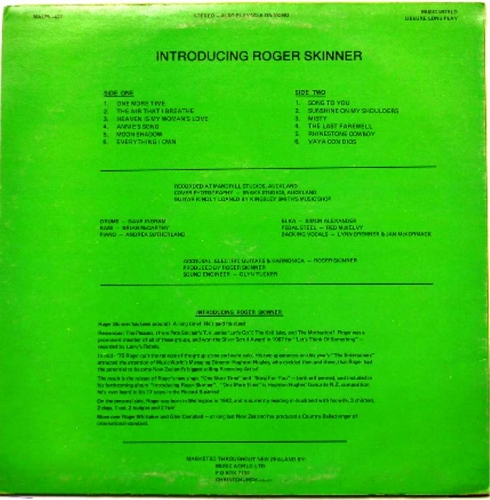 Roger Skinner used to sneak into his school's music room during lunch so he could play the guitar.

His cheeky antics were discovered and instead of being punished, the music teacher decided to show him how to play.

By the age of 13 he had formed his own skiffle band called The Cool Cats.

Mr Skinner is one of the latest recipients of the Variety Artists Club's Scroll of Honour Award, which was awarded to him for his dedication to the industry, and to charity.

He has played a variety of instruments throughout his life but none compare to the home-made instruments his first band played.

A traditional washboard and a tea chest and broom were some of the house-hold items the group used to create their tunes.

"You'd make do with what you could find," he says.

The tea chest acted as a double bass – the broom stuck out like a pole, and one or more strings were attached from the broom to the chest and plucked.

"It could be a clothesline or anything."

After leaving school he got a job as a mechanic but kept on falling asleep on the job.

"I was working through the day and playing at night. But my boss said to me: `Do you want to be a musician or a mechanic'?"

He chose the former – and more than five decades after forming his first band, Mr Skinner can rattle off numerous names of groups he has performed with.

They include a Beatles cover band The Pleasers and rock `n' roll group the Kiel Isles Band. He has played in the UK, US, Australia and all the well-known dance venues that were once scattered throughout Auckland.

"It was good fun those days – still is," the animated 68-year-old says.

He still plays solo gigs and with his rock and roll cover band Roger Skinner and the Motivation. He also plays at retirement homes "just to see the smiles on the faces of the old folk there".