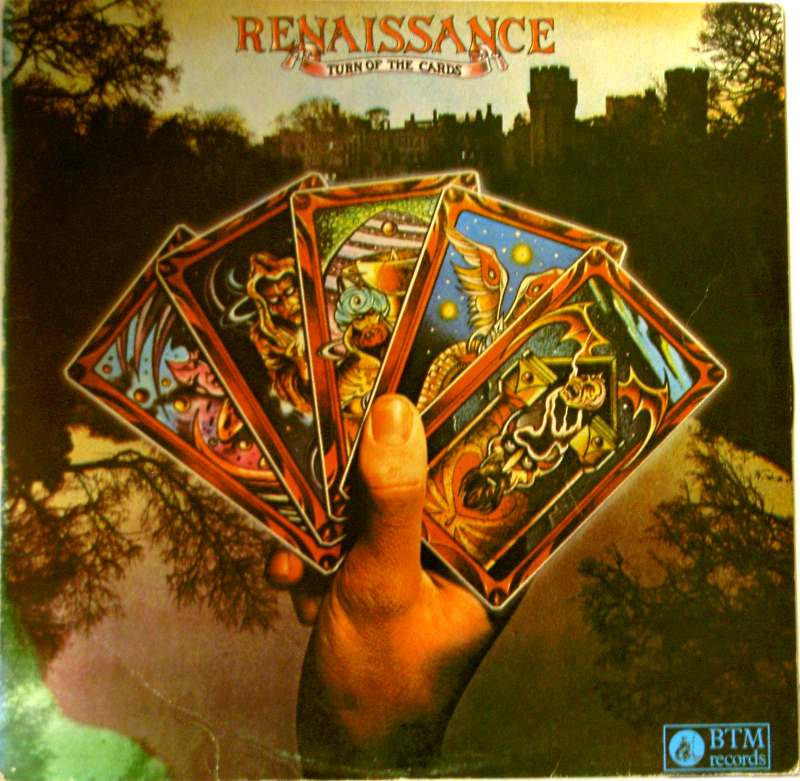 Turn of the Cards

Turn of the Cards is the fifth studio album by the English progressive rock band Renaissance, released in 1974. It was the last Renaissance studio album to include excerpts from existing classical pieces.[2]

In the UK, this was the very first release (BTM 1000) on Miles Copeland's fledgling label, BTM Records (British Talent Managers). In 1977, after releasing a total of 10 albums, including 2 more by Renaissance (BTM 1006: Scheherazade and Other Stories, and the double LP, BTM 2001, Live at Carnegie Hall), the label folded due to bankruptcy.[3]

The cover picture features Warwick Castle. The first BTM UK pressings had an alternate back cover, with a moody close-up portrait of Annie Haslam framed in one of the 'cards'. Later pressings, and in the US, a rather bland picture consistent in style and size with the other members portraits were added.

"Things I Don't Understand" was founder member Jim McCarty's last contribution to the band. "Running Hard" quotes a melodic phrase first used in "Mr. Pine" from the Illusion album, as well as the piece "Litanies" by French composer Jehan Alain. The music to "Cold Is Being" is taken entirely from "Adagio in G minor" (attributed to Tomaso Albinoni, but actually composed by Remo Giazotto) and, contrary to the album credits, was not composed by Michael Dunford; it was, however, credited in the back notes ("Thanks to Jehan Alain for the opening piece of RUNNING HARD and Albinoni for COLD IS BEING").[4] "Mother Russia" is cited by Jon Camp as being a case where he made major compositional contributions without being credited for them.[5]