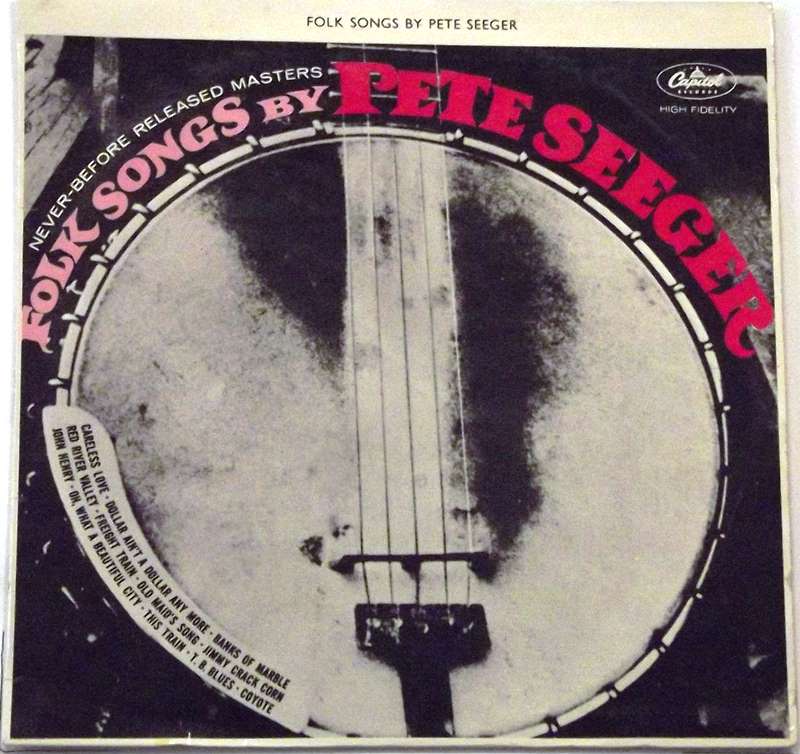 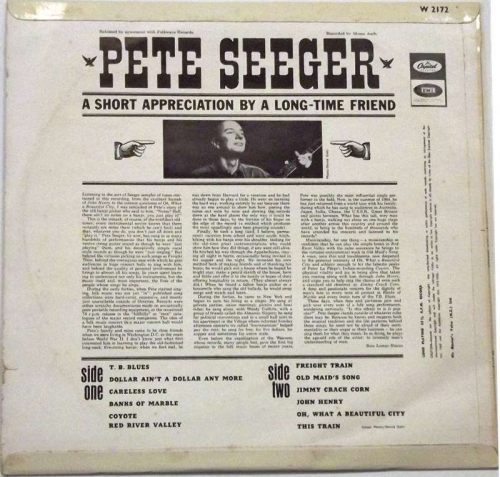 "Never-before released masters," proclaims a legend on the front cover of this LP, and when the much smaller print on the back cover reveals, "Released by agreement with Folkways Records," some explanation is offered for how it can be that an album of previously unreleased recordings by Pete Seeger, who is contracted to Columbia Records, is being issued by Capitol Records, one of Columbia's rivals. Seeger's tenure at Columbia, which dates back to 1961, doesn't seem to have interfered with his work for the tiny independent label Folkways, which predates his association with the major record label; Columbia hasn't felt that Folkways' continuing to pump out Seeger albums assembled from its vast archives constituted competition, given its limited distribution. Of course, having Folkways license material to Capitol is another matter entirely, and Columbia can't be pleased about it. What makes Seeger a viable candidate for such a release is his renewed prominence as of 1964. Arguably the godfather of the folk revival, his profile has been raised in recent years by Capitol's Kingston Trio, who charted with his song "Where Have All the Flowers Gone"; by the success of his song "If I Had a Hammer (The Hammer Song)," by Peter, Paul & Mary; by the controversy surrounding his exclusion from the network television series Hootenanny for his political background; and by the success of his Columbia album We Shall Overcome and its chart single "Little Boxes." With its generic title, Folk Songs by Pete Seeger, the album of 12 songs Capitol has gotten from Folkways, emphasizes Seeger's ties to traditional folk and country music, starting with the opening track, "T.B. Blues," his version of a song by the yodeling brakeman Jimmie Rodgers. Other songs, such as "Careless Love" and "Red River Valley," also fit into the traditional country category, or would if Seeger didn't sing them without a trace of a Southern accent. Elsewhere, Seeger provides his takes on some folk songs that have been popularized by the likes of Burl Ives ( "Jimmy Crack Corn") and Peter, Paul & Mary ("Freight Train," "This Train"). He also takes on some of his well-known political concerns, addressing inflation on "Dollar Ain't a Dollar Any More," the plight of farmers in "Banks of Marble," and conservation in "Coyote." Still, this is not a collection that comes off as primarily political; rather, it lives up to its name, presenting Folk Songs by Pete Seeger.