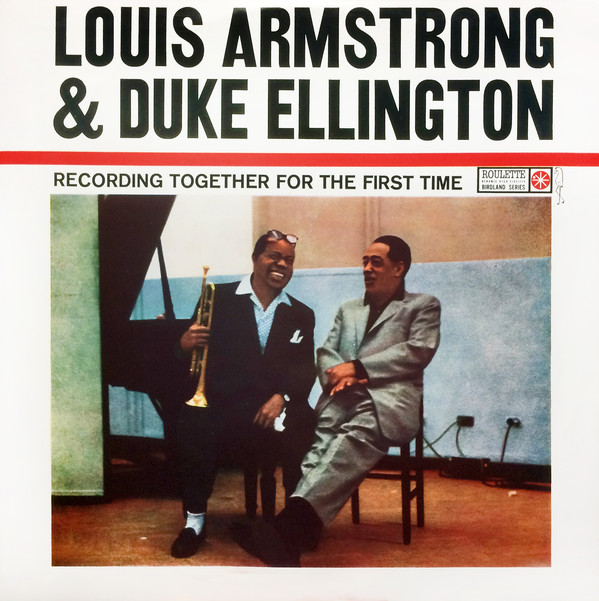 Recording Together For The First Time

Louis Armstrong and Duke Ellington were (and are) two of the main stems of jazz. Any way you look at it, just about everything that's ever happened in this music leads directly -- or indirectly -- back to them. Both men were born on the cusp of the 19th and 20th centuries, and each became established as a leader during the middle '20s. Although their paths had crossed from time to time over the years, nobody in the entertainment industry had ever managed to get Armstrong and Ellington into a recording studio to make an album together. On April 3, 1961, producer Bob Thiele achieved what should be regarded as one of his greatest accomplishments; he organized and supervised a seven-and-a-half-hour session at RCA Victor's Studio One on East 24th Street in Manhattan, using a sextet combining Duke Ellington with Louis Armstrong & His All-Stars. This group included ex-Ellington clarinetist Barney Bigard, ex-Jimmie Lunceford swing-to-bop trombonist Trummy Young, bassist Mort Herbert, and drummer Danny Barcelona. A second session took place during the afternoon of the following day. The music resulting from Thiele's inspired experiment is outstanding and utterly essential. That means everybody ought to hear this album at least once, and many will want to hear it again and again all the way through, for this is one of the most intriguing confluences in all of recorded jazz. Armstrong blew his horn with authority and sang beautifully and robustly. Highlights include the bluesy "I'm Just a Lucky So and So," a smoking hot, scat-laden rendition of "Cotton Tail," and "The Beautiful American," a marvelously modern exercise composed on the spot by Ellington that leaves one with the curious impression that Armstrong has just finished sitting in with Charles Mingus. (It's also a premonition of the Ellington/Mingus/Roach Money Jungle session that would take place the following year.) Since Thiele had "borrowed" Ellington from Columbia without permission, Roulette compensated by "lending" Count Basie & His Orchestra for the big-band blowout album entitled First Time! The Count Meets the Duke. The Armstrong/Ellington master takes were originally issued on two long-playing records; Recording Together for the First Time came out on Roulette in 1961 and The Great Reunion appeared in 1963. Both albums later resurfaced as a Roulette LP two-fer entitled The Duke Ellington/Louis Armstrong Years, and the material has appeared digitally many times over. Those who truly love and respect Louis Armstrong and Duke Ellington will want to obtain, absorb, study, and cherish this music.