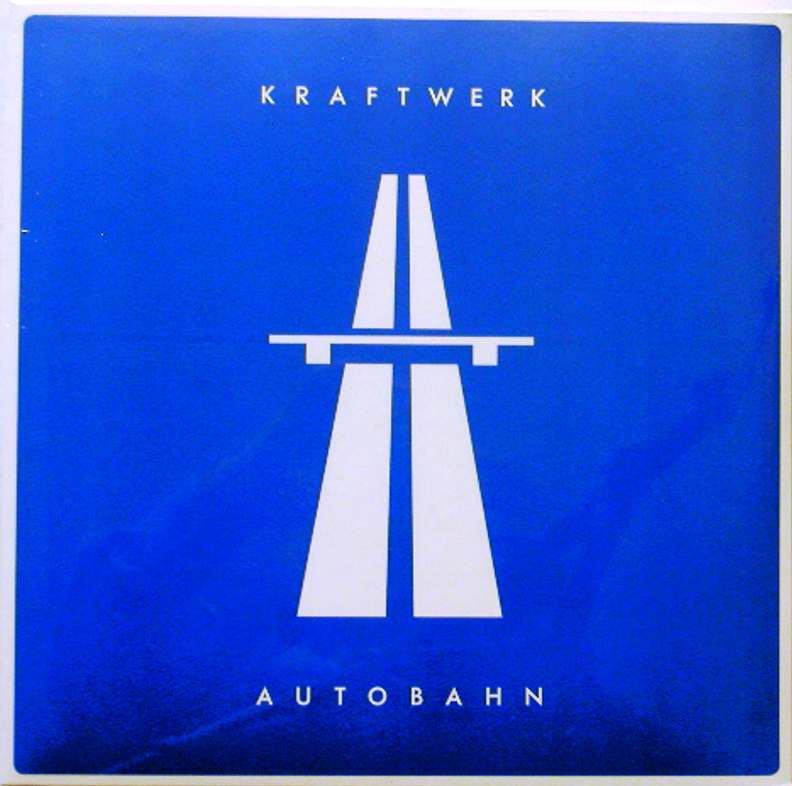 Autobahn is the fourth studio album by German electronic band Kraftwerk, released in November 1974. The 22-minute title track "Autobahn" was edited to 3:27 for single release and reached number 25 on the US Billboard Hot 100 chart, number 30 in the Australian chart,[8] and performed even higher around Europe, reaching number 11 in the UK[9] and number 12 in the Netherlands. This commercial success came after the band had released three experimental and purely instrumental albums.

Autobahn is not a completely electronic album, as violin, flute, piano and guitar are used along with synthesizers. The title track features both untreated and vocoded vocals; the remaining tracks are purely instrumental. Kraftwerk used a Minimoog, an ARP Odyssey, an EMS Synthi AKS and various devices of their own design and implementation, such as their famous electronic drums.

The title track is intended to capture the feeling of driving on the Autobahn: from travelling through the landscape, the high-speed concentration on the fast lane, to tuning the car radio and the monotony of a long trip. It describes the A 555 from Köln to Bonn—the first Autobahn ever. It was built under the mayor Konrad Adenauer in 1929 to 1932 without any intersections.

The remaining tracks have a two-part structure—an introduction followed by a main section—and are loosely based around a theme of the night, beginning with twin tracks "Kometenmelodie (Comet Melody) 1 and 2" (inspired by Comet Kohoutek), then an ominous-sounding "Mitternacht" (Midnight) and the final track, "Morgenspaziergang" (Morning Stroll). This last track begins as a dawn chorus bird-song effect created by the electronic instruments, with an extended conclusion that uses a repeating variation of the melodic phrase heard in the first instrumental section of "Autobahn".

The front cover of the original German album was painted by Emil Schult, a long-time collaborator of Ralf and Florian, who also co-wrote the lyrics to the song "Autobahn". The version released in the UK on the Vertigo label in 1974 had a differently designed cover, produced by the label’s in-house marketing department.

The rear cover of the original LP showed Hütter, Schneider, Röder and Emil Schult seated as if in the back of a car. Wolfgang Flür’s head was added to the group photo (superimposed over Emil Schult’s) when it was decided that he would stay as a permanent member of the band. However, for the 2009 remaster booklet this image has been replaced by the version originally photographed.

Klaus Röder was not a member of the band for very long, and had left before the recording sessions were completed.

Konrad Plank had reputedly played a large role in developing the Kraftwerk sound,[10] and much of the recording and all of the mixing of the work took place at his studio in Cologne. Plank's contribution to the sound was evident when comparing the album version of "Kometenmelodie" with the demo-quality single "Kohoutek-Kometenmelodie", that had been recorded without his input.

Flür had played with the band since late in 1973, first appearing with them on a Berlin TV performance to promote their Ralf und Florian album. On that show, he debuted the band’s custom-built electronic percussion pads, and these feature heavily on the Autobahn album.

A newly remastered edition of the album was released by EMI Records, Mute Records and Astralwerks Records on CD and digital download in October/November 2009, with heavyweight vinyl editions released in November/December 2009.

A quadraphonic mix was released on Q8 eight-track cartridge, possibly without the band's knowledge.

On 6 February 2013 the group played the entire album at the first of their eight-night retrospectives at the Tate Modern in London.[11]