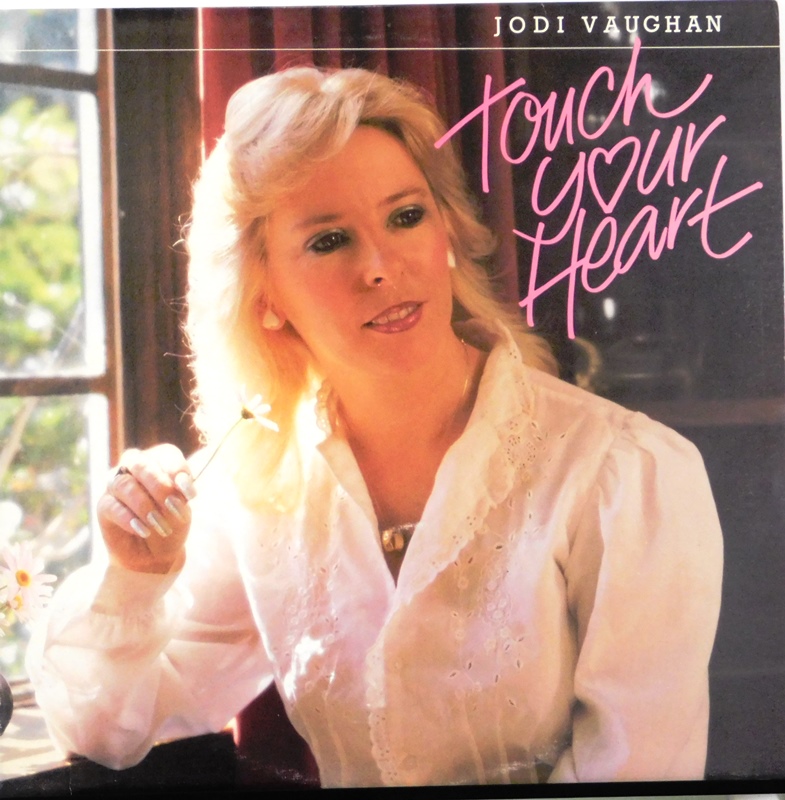 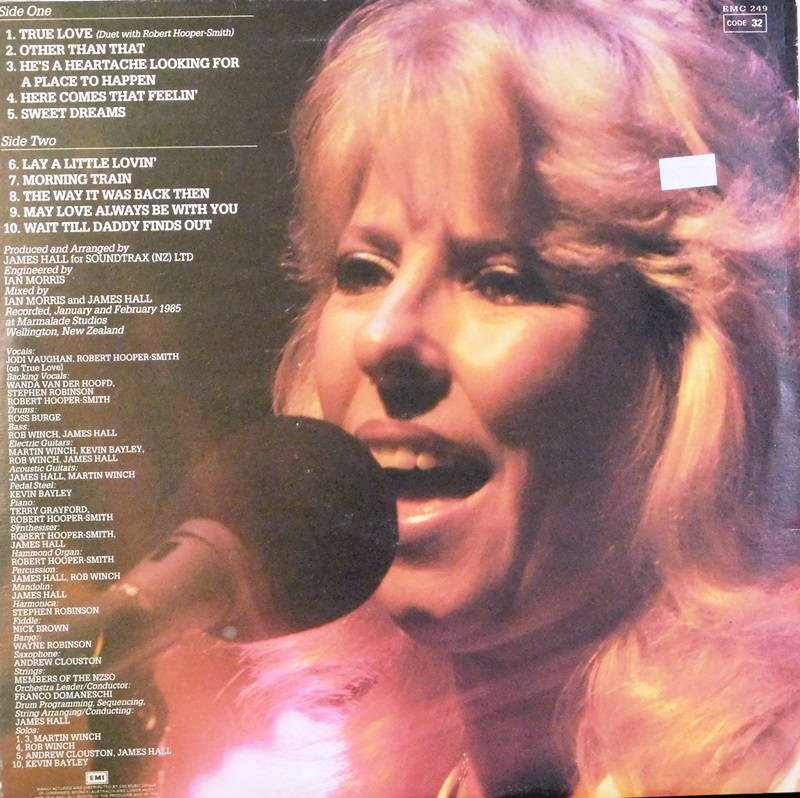 She was one of the biggest names in New Zealand country music in the 1980s, but Jodi Vaughan was born in Australia and originally crossed the Tasman to attend a 21st birthday party. Her throaty delivery, bubbly personality and sexy image saw the 4'11" singer become a television star and top-selling recording artist in her adopted home.

She was spotted on a TV talent quest in 1976 by guitarist Gray Bartlett and began a collaboration with him and Brendan Dugan that would endure virtually unscathed. Despite the odd bump in the road, their greatest successes have been in each other’s company.

Vaughan sacrificed plenty for her career – including three marriages and leaving two children with their father in Australia – and fought back from nodules on her vocal cords and two financial collapses to still be entertaining today.

Born Elaine Moore in Balmain, Sydney, on 25 April 1950, she and her three siblings were split up and put into foster care when their parents separated late in the decade. Her first foster placement brought with it a cycle of emotional and physical abuse but thankfully lasted just four or five months before she was moved to a loving older couple in Shellharbour, in the Illawarra District.

Her foster parents’ granddaughter had a toy piano which Elaine took every opportunity to tinker on and she was eventually bought an electric organ. She wasn’t particularly interested in the music theory lessons she received, but learnt to play songs she liked by ear and joined the choir. There were also tap-dancing lessons.

At 16, she attended a Friday night chaperoned dance at the Pioneer Hall, in Wollongong. When she mentioned to her date that she could sing as well as the girl on stage, the young man bet her a quid she didn’t have the guts to get up and prove it. The following week she did – singing ‘He’s Got The Whole World In His Hands’ – prompting the band, The Tornadoes, to invite her to join them.

There was a setback a year later when she appeared on the television show New Faces singing a Julie Rogers song and was told by a female judge that she’d never make it in show business because she was too small for the cameras.

Although married at 19 and starting a family, she was picking up enough singing work to interest an agent. But the agent suggested she adopt a stage name because her married name of Elaine Darlington was more suited to “someone giving an ironing demonstration”. Thus Elaine became Jodi Vaughan – the first name after her daughter Jodie, the surname out of the ether.

However, the music career was stifled when Vaughan’s husband became jealous of the attention his wife was receiving from young men. Their marriage didn’t last; sometime later Vaughan met New Zealander Greg Slight at her regular Wollongong RSL gig and the two were wed.

At Labour Weekend 1975, the couple arrived in New Zealand on one-way tickets for Slight’s brother’s 21st in Napier. While there they took in local band The Doug Ryder Convention at the Meeanee Hotel and Vaughan was encouraged to get up and sing. The Slight family were suitably impressed and insisted Vaughan audition for the TV talent show The Entertainers.

Slight got a job as the lawnmower man at the Otumoetai Trust in Tauranga and when the Christmas do approached, he volunteered his wife to sing. There she met a local country music band and enlisted the guitarist to assist her on her Entertainers audition. Although she had no interest in the Australian country music she had been exposed to – such as Nelson-born Tex Morton, Slim Dusty, and Reg Lindsay – she fell hard for the American country the local musicians introduced her to.

Bartlett scored her a recording deal with EMI and produced her debut album Jodi Vaughan, recorded at EMI Studios in Wellington and released in late 1978.

After finishing runner-up in the final of The Entertainers in 1976, edging out Putaruru checkout girl and future dear friend Patsy Riggir, she got a phone call from Auckland guitarist Gray Bartlett. He had seen her performance, rung his duo partner Brendan Dugan, and the two agreed they should ask her to become a part of their act.

Still relatively new to the country, Vaughan had little idea who the two men were but accepted the offer. Initially travelling from Tauranga to Auckland for floorshow spots, the Slights moved to Auckland as Bartlett and Dugan began to involve Vaughan more and more in their gigs. She was six months pregnant when Bartlett secured her first spot on the South Pacific Television show Touch Of Country.

Bartlett scored her a recording deal with EMI and produced her debut album Jodi Vaughan, recorded at EMI Studios in Wellington and released in late 1978. He also picked most of the songs, which kicked off with The Rolling Stones’ ‘Honky Tonk Women’ and also included Merle Haggard’s ‘Silver Wings’ and Linda Ronstadt’s version of ‘Blue Bayou’.

Country music in New Zealand burst wide open in 1980 with the TVNZ series That’s Country, and front and centre were Jodi Vaughan, Brendan Dugan and Gray Bartlett. Vaughan’s performance style, not to mention the tight pants, short skirts and cleavage, saw her become an instant favourite.

The image was a consequence of her early days in the Illawarra when agents told her sex sold. It led to some interesting moments at gigs. Bartlett and Dugan would tease her and try to set her up with dancers in the audience – one shearer at the Gretna Hotel in Taihape heaving her over his shoulder and carrying her to the dance floor. Vaughan gave as well as she got and baited her offsiders mercilessly.

She was nominated for awards, but was passed over in favour of contemporaries like Suzanne Prentice, Tina Cross and Sharon O’Neill. She asked Bartlett what the others were doing that she was not. He suggested she just stay patient, but Vaughan decided she would try writing her own material.

She found an old pianola for $150 in a second-hand store and bought it. The first two songs she wrote – ‘Tennessee Saturday Night’ and ‘Honey Wine’ – appeared on her 1982 album Fairweather Friends, with Brendan Dugan. ‘Honey Wine’ was a finalist in that year’s APRA Silver Scroll in the heady company of Graham Brazier’s ‘Billy Bold’, Dave McArtney’s ‘Is That The Way?’ and eventual winner ‘I Can’t Sing Very Well’ by Stephen Young, of Mother Goose. Vaughan was also awarded Most Promising Female Vocalist at the NZ Music Awards.

The Dick Le Fort-produced Fairweather Friends was released on CBS and peaked at No.15 on the album chart, going platinum. Vaughan had to stand on two beer crates to drape herself over the shoulder of the 6'4" Dugan for the cover shot. The single ‘No Fool Like An Old Fool’ reached No.12 and spent 10 weeks in the NZ Top 40.

Along with Bartlett, the duo undertook eight trips to the United States during the early 1980s and when Dugan and Bartlett were fired from That’s Country in 1983 after a spat with producers, Vaughan resigned in support. She appeared as a witness at the ensuing Commission of Inquiry, but was the only one of the trio to rejoin the cast for the final series before the show folded late in 1984.

That year she cleaned up at the short-lived NZ Professional Country Music Recording Awards, scooping Top Female Vocalist, Best Songwriter and LP of the Year with Dugan for Fairweather Friends. Dugan was awarded Top Male Vocalist and Bartlett Top Instrumentalist.

Produced by James Hall and including five of her own songs, Rodeo Eyes was released on EMI in mid-1984. But while on tour as support act for US pop and country singer Johnny Tillotson, Vaughan developed worsening throat problems, resulting in not being able to speak the morning after a show and having to lower the keys to her songs.

She appeared on Tom Sharplin’s cover of Paul and Paula’s early 1960s hit ‘Hey, Paula’, released on RCA, and just before Christmas underwent an operation to remove nodules from her vocal cords.

Six weeks later, Vaughan was back in the studio recording Touch Your Heart, which was again produced by Hall and released on EMI. Meanwhile, the Vaughan-Bartlett-Dugan axis came to an end early in 1985, with Dugan opting to go it alone under new manager Lew Pryme. Vaughan remained with Bartlett’s management.

Straight From The Heart followed quickly in 1986 and remains Vaughan’s favourite album due to its bare bones approach. Released on Festival and produced by Bartlett, it contains a duet with 1960s Viking Records star Ken Lemon standing in for the departed Dugan.

But soon Vaughan and Bartlett also parted ways after Vaughan toured New Zealand with Freddy Fender and decided to test the waters in the United States at the behest of Fender’s road manager.

Arriving in Houston, Texas, in April 1987, it soon became clear that Fender’s road manager – now her manager – had a lot of contacts and knew what had to be done, but not how to do it. She auditioned for the TV show Louisiana Hayride, but was knocked back when her manager demanded an 18-week contract. A showcase for local agents failed when the manager neglected to follow up on invitations and not one agent showed up.

He set her up with a fantastic all-girl gay bar band that included a drummer who spat tobacco and trashed her kit at the end of the night, but it became a bit too much for Vaughan during one gig when the Ku Klux Klan appeared in the audience. After hearing the Klan had beaten up the bar’s gun-toting female owner in the following weeks, Vaughan declined an invitation to play there again.

She recorded an album at Huey P. Meaux’s famous Sugarhill Recording Studios in Houston, which was eventually released on New Zealand promoter Brian Richards’ RMB label in 1992 as The Houston Texas Sessions.

But the trip cost Vaughan her marriage when she returned to New Zealand deep in debt in November 1987. She was forced to take a day job, studying word-processing at night while working at the Gilmours warehouse on Auckland’s North Shore. The lead role in the Hamilton Operatic Society’s The Best Little Whorehouse In Texas in early 1988 coaxed her back on stage, but the next two years were fairly quiet.

Her fifth solo album Loads Of Country Lovin’ was released on Festival in 1990, with most of the material self-written. Recorded at drummer Noel Lamberton’s Villa Recorders in Rotorua, it was produced by Vaughan, Lamberton and pianist Ernie Semu.

Later that year, a promoter reunited Vaughan, Brendan Dugan and Gray Bartlett for the hugely successful Together Again tour that broke box office records nationwide. The corresponding album, released on Festival, spent the first week of September at No.1. The aftermath wasn’t so pretty when the promoter gambled away the tour proceeds.

Once again relying solely on music for her income, Vaughan found work dried up after the saturation of the Together Again juggernaut. Penniless, she took a job at a scungy bar in Taupo before putting into action her dream of an all-girl harmony trio she called Girls Talk. The line-up stabilised early on with the addition of former Music World recording artist Celine Toner and ex-Country Touch singer Barbie Davidson and the women worked solidly until 2000.

She also found employment at Mainfreight in Hamilton where she has remained while performing her own shows or hitting the road with Dugan and Bartlett and various groupings of former That’s Country stars and recording artists including John Grenell, The Hamilton County Bluegrass Band, Eddie Low and Patsy Riggir in Bartlett promotions such as Together Again: The Reunion, Highway Of Legends and True Legends.