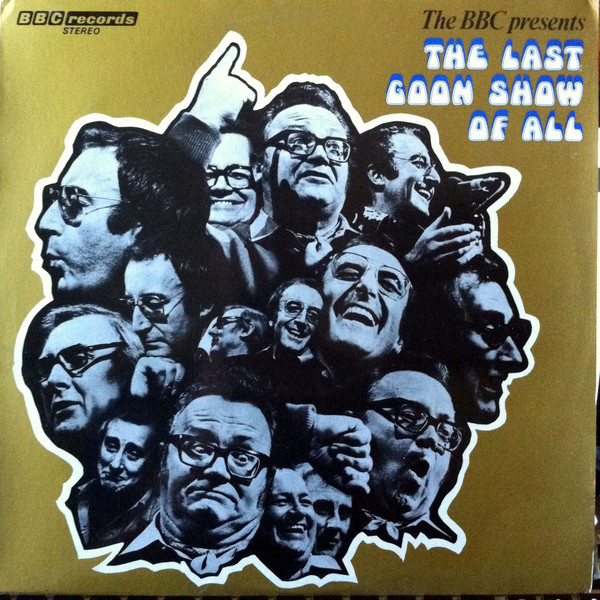 The Last Goon Show Of All

The Last Goon Show of All, broadcast on 5 October 1972, was a special edition of the famous BBC Radio show The Goon Show, commissioned as part of the celebrations of the 50th anniversary of the BBC. It was simulcast on radio and television, and later released as an audio recording on long-playing record.[1] This in turn has been re-issued in other formats such as compact disc.[2] A video of the television broadcast was also released on VHS and later on DVD,[3] although with some omissions. In early October 2007, 35 years after the original broadcast, a full unedited version was broadcast on BBC 7 (now BBC Radio 4 Extra), the digital radio channel dedicated to re-runs of classic shows.

Different versions of the show could be heard in different contexts. The television broadcast began with pre-show announcements by the producer, John Browell, and introduction of the participants, followed by warm-up routines by the cast. The broadcast proper begins with Spike Milligan, Peter Sellers and Harry Secombe each trying and failing to lead the other two in saying "It's great to be back." This was the start of the show from the radio audience's point of view. Announcer Andrew Timothy then intervenes with "They haven't quite got the hang of it yet, but after another smoke they should be switched on."

From there the show re-capitulates the cast introductions with typically skewed humour. There is a spoof "warm-up" where Sellers, using a "dramatic voice" announces that the best way to warm up an audience is to have the gentlemen squeeze the thigh of the lady sitting next to them.

Timothy then announces that, since Her Majesty the Queen is not available,[4] Mr. Secombe has donned a "floral cretonne frock" and stepped in for her at the last minute. Secombe then attempts to "start the show" which sounds a lot like starting, or rather failing to start, a car. This play on words was used by Milligan in his other scripts, particularly the contemporaneous "Milligna Show". The tone of the whole show, in fact, was much more like Milligan's then-current writing than any of the original shows. Although all the stock characters put in an appearance, the humour consists mostly of one-liners.

Secombe eventually starts the show with the help of "a Constabule (sic) of Olde England played by an aging Peter Sellers" who points out that the show has no jokes in the "fuel tonk". Again, humorous typographical errors were a staple of Milligan's writing at the time. For this interlude, Sellers used his impression of Michael Caine's voice, complete with the catchphrase "There's not many people know that!" This is a reference to Caine's supposed fondness for telling people obscure facts. Secombe shouts in some old jokes and "starts" the show.

Before the "plot" begins, there is a musical interlude in which Ray Ellington performs a very upbeat version of The Tennessee Waltz. Ellington was introduced as "Mrs Dale's last husband". There is also a reference to Eric Sykes, a fellow comedy actor, who co-wrote a number of episodes of The Goon Show with Spike. Present in the audience was Princess Anne (now Princess Royal), whose brother Prince Charles was a well-known Goon fan. A joke telegram was read out apologising for his absence.

A joke is made about "us directors of Harlech TV" by Harry Secombe. Harry was one of several directors of the erstwhile TV company at the time. Actors Richard Burton and his wife Elizabeth Taylor were also directors.