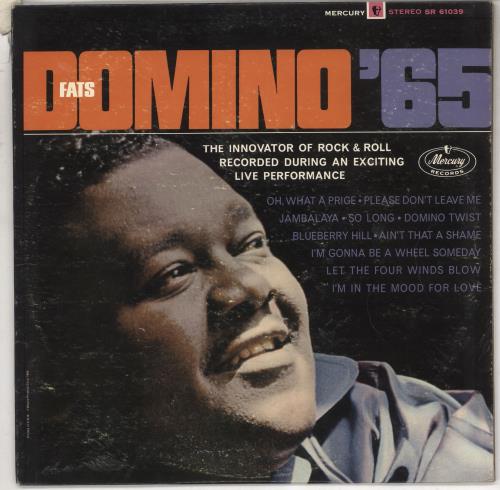 Antoine Dominique Domino Jr. (February 26, 1928 – October 24, 2017), known as Fats Domino, was an American pianist and singer-songwriter. One of the pioneers of rock and roll music, Domino sold more than 65 million records.[2]

Between 1955 and 1960, he had eleven Top 10 US pop hits.[3] By 1955 five of his records had sold more than a million copies, being certified gold.[4] The Associated Press estimates that during his career, the artist "sold more than 110 million records[5] and the Grammy organization states that Domino landed 37 songs in the Top 40 on the Billboard Hot 100 throughout his career, including 11 that peaked inside the Top 10".[6]

His humility and shyness may be one reason his contribution to the genre has been overlooked.[7] The significance of his work was great however; Elvis Presley declared Domino to be "the real king of rock ‘n’ roll" and once announced that Domino "was a huge influence on me when I started out".[8][9]

Four of Domino's records were named to the Grammy Hall of Fame for their significance: "Blueberry Hill", "Ain't It A Shame", "Walking to New Orleans" and "The Fat Man".[10] "The Fat Man" "is cited by some historians as the first rock and roll single and the first to sell more than 1 million copies".[10][11]