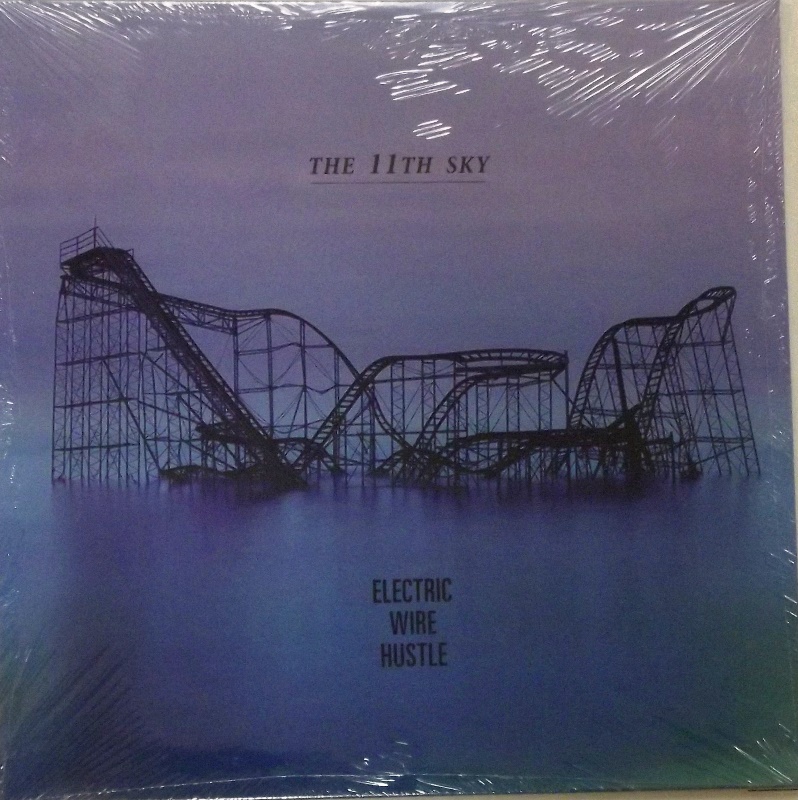 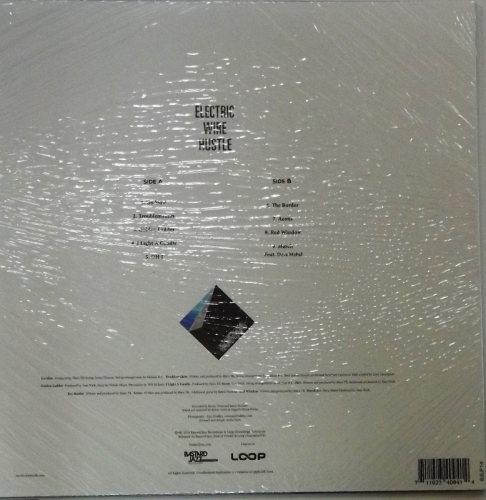 Sealed brand new album from Wellington's Electric Wire Hustle. Made in the USA.

Following on from the release of the award winning Love Can Prevail, Wellington’s Electric Wire Hustle are set to release their third album, The 11thSky, which continues themes of surreal storytelling, first seen on 2014’s Aeons EP.  This new album further push the boundaries of conventional genres with grainy electronic beats, smoky vocals and driving synths, further expanding their psychedelic/soul-sound.  It’s like David Lynch meets Motown, but with the essence of Aotearoa.

Human life and knowledge were said to originate in the realm of Ranginui, the sky father.  In one tradition, the god Tāne climbed to the citadel Te Tihi-o-Manono, in the highest of the 12 heavens, known as Te Toi-o-ngā-rangi.

And it was there that he retrieved three baskets of knowledge: te kete-tuatea (basket of light), te kete-tuauri (basket of darkness) and te kete-aronui (basket of pursuit).  Or so the legend goes.  On Electric Wire Hustle’s new album, The 11th Sky, the journey mirrors Tāne’s but is somewhat incomplete.  “I feel like we’re stuck on the 11th Heaven, somehow unable to move.  In my mind there’s room to move but something always holds us back – love, people, money, dreams.”  We’re almost at the final destination but somehow this is just out of reach.  This was the description Mara TK gave Tim Gruar recently when he phoned him up to discuss the upcoming release of EWH’s third album.  That feeling is best summed up in the lyrics of the Oh I, which talks of landing on ‘Cloud 4 ½’ and ‘Cloud 6 ½’ , that is points short of the mark.  You get there’s a sense of dissatisfaction and searching on this album.

Another song that grabs your attention is Troublemakers, with lines that are calling his lover away from dangerous elements to a better place elsewhere.  “That one has some viola on it and strings (courtesy of Mahuia Brifleman Cooper).  It was (Gramski’s) Paul McLaney that connected us up.  I’d been working with him and the Black Quartet for shows at the pop-up Globe Theatre in Auckland.  The Black Quartet have something of a Classical music rockstar status, having worked with Kanye West, 60Sixty and Ladyhawke.   “Mahuia had the bones of that song and was quite a big part in its development – like an angel taking it to some other place, where I’d never thought to go.”  Mara employed a harpist, Natalia Mann for Golden Ladder, one of the earliest tracks on the album.  “Although, by the time I’m finished it’s been ‘doctored electronically quite a bit.”

Now Operating EWH as a solo project Mara has written and produced much of it by himself, with contributions from a host of collaborators ranging from a harpist to producers like and vocalist Diva Mahal – who sings on March (apparently, this was initially her song before EWH took it on).

Originally, EWH were a three piece – David ‘Taay Ninh’ Wright (keyboards, synths) Myele Manzanza (drums) and Mara TK (vocals, bass, guitar), with assistance from producer Benny Tones, making edgy dance funk with futuristic overtones.  Back in 2006 Mara ran into Wright playing in Christchurch and the two got talking.  Wright promised to call Mara up when he moved to Wellington, and eventually did, leading to a long collaboration.  They found Myele busking on the streets.  “The three of us got together to make our self-titled album and we did well with that, traveling around the world, touring it through festivals and shows to over 14 countries.  But,” he explains, “we grow up, and travelling turns to making babies and working, etc.”  Their second album Love Can Prevail, Mara explains, philosophically, was a big departure from their original path.  “We were exploring and sending out probes, looking for a landing spot, trying to figure out the landscape.  You know, people need to categorize you and understand what you’re doing.”  Then Aeons saw the group strip down to a duo between Mara and Wright and yet another new direction.  It reflected Mara’s constant desire to re-investigate musicianship.  Something he’s also tried to do on other projects like Data Hui, which also features is his father, psychedelic guitarist Billy TK, Rikki Gooch and Nudge drummer Iraia Whakamoe.  Taniwhunk (2013) explores ultramodern blues, country and folk driven by an investigation of the theme of “Maoris in space.”  Maria refers to it as “a sci-fi re-appropriation of the navigation techniques of the first Maori settlers of Aotearoa, as re-imagined through a bilingually futurist space exploration lens”.  There is a new Data Hui album in the pipeline, hopefully this year.

“History is now three generations deep for Black Music but not everyone plays it.  I had plenty of show band music, like the Maori Volcanics around me when I grew up but it was bands like the Shadows that really influenced me.  Dad would play desert blues albums and jazz like Coletrane.  But it was Apache that captured my imagination.  He had to play it for the bands he worked for, note for note.  Even the mistakes.   When I reflect on my Dad and his life, as I get older myself, I get some excitement about what he achieved and I want to capture some of that in the Data Hui project.  It’s also there in the stories of The 11th Sky, too.”

‘Together alone’ is the best way to describe Mara’s production process, crafting much of The 11th Sky at Wellington’s Blue Barn studios over a two-year period. “It took me a while to get into the right space before I could really start. “I had a little room to myself where I could drift in and do a few hours, without economic pressures, etc.”  Benny Tones and engineer Ben Horton completed the production process, working around Mara’s last minute changes and edits.  “Yeah.  Nothing’s safe.  I kept coming up with new ideas for the final production – new samples, sounds and stuff.  Some tracks have over 6 remastered because I kept adding things.  One song, ExMachina got held up because it has an Aretha sample which I added at the last minute and we had to get clearance.”

The album’s cover “conjures up little dream world’s in somebody’s mind” Mara reckons.  The ethereal image of an abandoned rollercoaster shrouded in blue clouds gives the impression of tranquil isolation like the stillness of a mountaintop – peaceful, yet threatening.  “It was actually a photo from the New York Times of a Theme Park after a Southern States hurricane.  It has this sort of aftermath narrative to it.  I have changed it to be more like an I completed journey.”  To be continued….