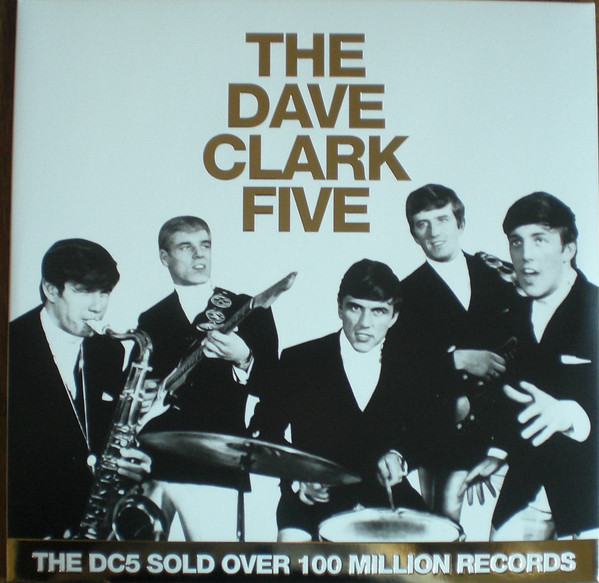 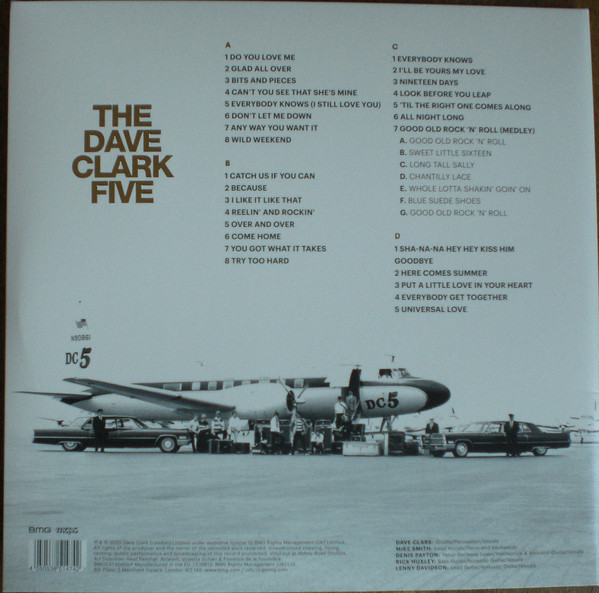 The Dave Clark Five, often called The DC5, were an English rock and roll band formed in Tottenham in 1958. In January 1964 they had their first UK top ten single, "Glad All Over", which knocked the Beatles' "I Want to Hold Your Hand" off the top of the UK Singles Chart. It peaked at No. 6 in the United States in April 1964.[1] Although this was their only UK No. 1, they topped the US chart in December 1965, with their cover of Bobby Day's "Over and Over". Their version of Chet Powers' "Get Together" reached No. 8 on the UK Singles Chart retitled as "Everybody Get Together".[2]

They were the second group of the British Invasion to appear on The Ed Sullivan Show in the United States (for two weeks in March 1964 following the Beatles' three weeks the previous month). They would ultimately have 18 appearances on the show. The DC5 were one of the most commercially successful acts of the British Invasion, releasing seventeen top 40 hits in the US between 1964 and 1967, and were briefly considered serious rivals to the Beatles. The group disbanded in early 1970. On 10 March 2008, the band was inducted into the Rock and Roll Hall of Fame.[3]

The band had its origins in 1958, as the backing musicians for north London vocalist Stan Saxon.[4] Dave Clark played drums and contributed background vocals, alongside a frequently changing line-up.[4] Clark and guitarist Rick Huxley both participated in the 1958 line-up.[5] Clark and his bandmates eventually split with Saxon and reconstituted themselves as a standalone concern in January 1962, making their home in the South Grove Youth Club in Tottenham, London.[4] After a little more evolution, a lasting ensemble was settled, with Clark on drums, Huxley moving to bass, Lenny Davidson on lead guitar, Denis Payton on saxophone (and harmonica and second guitar), and Mike Smith on keyboards and main vocals.[4] Davidson's previous bands were the Off Beats and the Impalas.[6][7]

The DC5 was promoted as the vanguard of a "Tottenham Sound", a response to Liverpool's Mersey Beat sound,[8] which featured an often loud and forceful production style driven by Clark's punchy drumming, Payton's saxophone padding and Smith's belting vocals. Dave Clark struck business deals that allowed him to produce the band's recordings and gave him control of the master recordings.[9] Songwriting credits went to Clark, Clark and Smith.[10] Session drummer Bobby Graham is also reported to have played, sometimes alongside Clark, on some of the band's hits.[11][12]

The band released a film, Catch Us If You Can (directed by John Boorman) in 1965. It starred Barbara Ferris, and was released in the United States as Having a Wild Weekend. The short film Hits in Action highlighted a series of Dave Clark Five hits.

Other than the songs "Live In the Sky", "Maze of Love", "Inside and Out", "Red Balloon" and "Lost In His Dreams", the band did not follow the psychedelic music trend.[14] Their popularity in the US mostly dried up by 1967, though they continued to score hits in Britain for another three years. The Dave Clark Five disbanded in 1970, having had three singles on the UK chart that year, two of which reached the Top Ten. In 1970, Davidson, Huxley and Payton left, and Alan Parker and Eric Ford joined on lead guitar and bass. That line-up, renamed "Dave Clark & Friends", lasted until 1972.

Between 1978 and 1993, none of their music was available to be purchased in any commercial format due to rights-holder Clark declining to licence the band's recordings. In 1993, a single CD Glad All Over Again was produced by Dave himself and released by EMI in Britain.[15] After a 1989 deal with the Disney Channel to rebroadcast the 1960s ITV show Ready Steady Go! (which Clark owned), he made a deal with Disney-owned Hollywood Records to issue in 1993 a double CD History of the Dave Clark Five.[16] No DC5 material was then legally available until 2008, when the 28-track Hits compilation was released by Universal Music in the UK. In 2009, selections from the band's catalogue were released on iTunes. And in 2019, almost the entire catalogue from the band, including all the original 1960s studio albums, became available on Spotify for the first time.