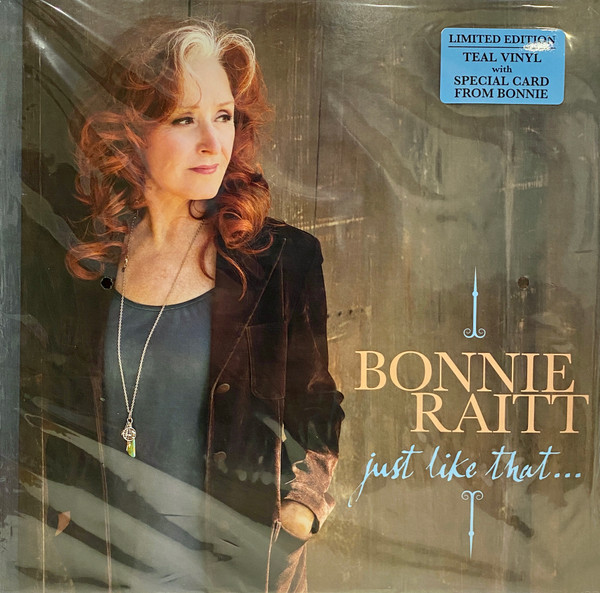 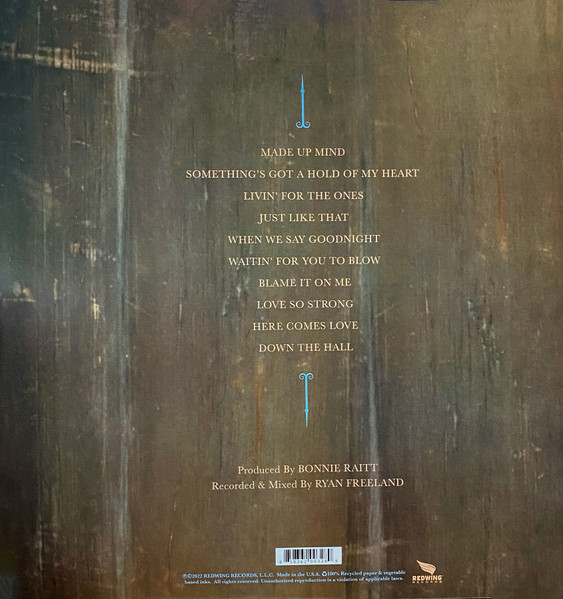 Six years since her last studio album, the veteran singer-songwriter and slide guitarist returnswith a collection of robust professional rock that may inspire deep dives into her back catalog.

If the young feel hard and forget fast, adults feel hard and remember long. To her credit, Bonnie Raitt has never courted the youth market. Avoiding disco strings and guest raps, the slide-guitar legend has amassed a body of work immersed in the blues and fully committed to the Well-Written Song; both her chosen repertoire and the material she’s penned herself adduce a belief in adulthood as a well-earned grace. Her sunny, wide-open voice and the sparkling correctness of her playing have kept bathos at bay ever since she invested Eric Kaz’s “Love Has No Pride,” one of her chestnuts, with an aw-shucks sensual abandonment: She’s in love, yet damn straight she keeps her pride.

Thirty-three years after Nick of Time, which yielded perhaps the most career-changing Grammy coronation in history, and six years since her last studio album, Dig in Deep, Raitt returns with Just Like That…, a self-produced effort boasting most of her strengths: a fidelity to the material that borders on the idolatrous, a penchant for leading mostly male pros through unfamiliar paces, and the exquisite precision of her guitar. As for weaknesses—well, she could have ventured further afield with the covers, as she did with Dig in Deep’s sly take on INXS’ “Need You Tonight.” Still, she sounds good, she plays better, and her band, co-led by longtime foil George Marinelli, simmers. A fine career summation should she choose to stop, Just Like That… is robust professional rock, a demonstration of Raitt’s vitality, like, say, Catherine Deneuve’s recent film work.

Her 18th album cedes a few of the solos she and Marinelli might have played to Glenn Patscha, a first-rate organist whose fills have the lightness of Charles Hodges. On her own “Waitin’ for You to Blow,” she lays down the guitar so Kenny Greenberg and Patscha can exchange solos over Ricky Fataar’s hi-hats. “Something’s Got a Hold of My Heart” gets a lift from Patscha’s Fender Rhodes colors, given a mixing boost by Raitt and Ryan Freeland (the funereal “Blame It on Me” is the only lapse into heavy-handedness). A chugging little thing familiar to fans of her 1973 cover of Martha and the Vandellas’ “You’ve Been in Love Too Long,” her band’s take on the Bros. Landreth’s “Made Up Mind” greases up a melody “like a rainstorm tin-roof symphony.” But they falter with a static reggae-lite version of Toots and the Maytals’ “Love So Strong”; it has a skank but not much else.

When Raitt keeps things fresh with narrative writing, the cleanness of her melodies and lyrics deepens her empathy. With the help of an acoustic lick that’s the stepchild of the Beatles’ “Blackbird ” and Patscha’s shimmering organ, “Down the Hall” examines a man’s stint in a prison infirmary; he observes Tyrone, “cancer eatin’ him inside out,” takes time to shave Julio’s head and, “crackin’ him up,” wash his feet. The Springsteen of Nebraska might have smiled with recognition, but Raitt’s contralto repels attempts to imbue “Down the Hall” with existential portent. Its just-the-facts approach is closer to Springsteen influences like Bobbie Ann Mason than Nebraska.

Just Like That… may inspire catalog deep dives. Many fans’ relationship with Raitt began with 1991’s Luck of the Draw, the septuple-platinum follow-up to Nick of Time that remains a landmark of boomer pop outreach—as much a generational touchstone as Paul Simon’s Graceland, the sort of album Mom and Dad played on vacation road trips because here was a woman Mom’s age having fun making her most powerful music at middle age. In a summer when Bryan Adams strangled the top 40 with a mousy ballad sprung from Kevin Costner’s Robin Hood: Prince of Thieves, “Something to Talk About” was a well-deserved hit, sexy in a mature, fully cognizant way; you’d have to go back to Fleetwood Mac’s “Little Lies” to find as worldly a Top Five hit sung by a fortysomething white woman. And her take on Mike Reid and Allen Shamblin’s “I Can’t Make You Love Me” is the kind of recording that comes along just once in an artist’s career, though it’s echoed in the pungent aphorisms of Just Like That…’s “Down the Hall”: “I don’t know about religion/I only know what I see.”

It’s okay if few performances on Just Like That… match that highlight. Most of her albums contain time bombs; even records like 1986’s Nine Lives, regarded as misbegotten, have miracles of grace like “Crime of Passion” that reward the digging. But Just Like That… will do—ostensible hand-me-downs like the Stones-y “Livin’ for the Ones” shame that band’s recent output, for example. The album title is the giveaway. Pros know their shit.