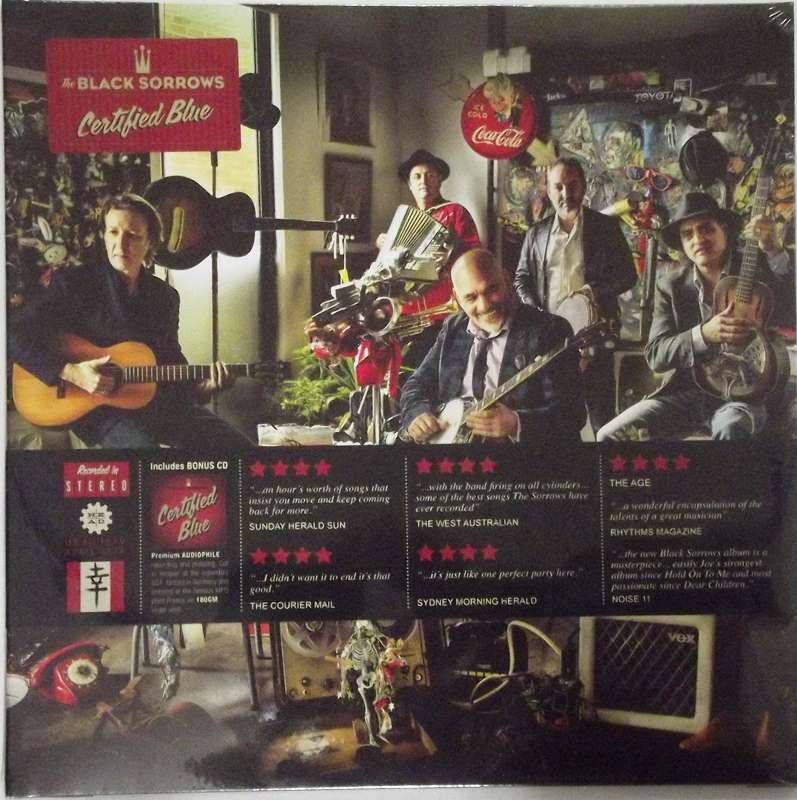 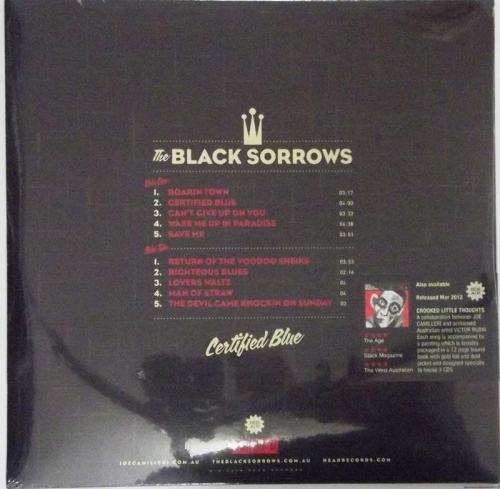 Sealed brand new 180 gram album housed in a gatefold cover. Includes free CD copy of album. Made in the EU.

Joe Camilleri is a chameleon, a musician of many parts: a songwriter, singer, saxophonist, producer, performer, bandleader and even record label boss. But if you want to know who the real Joe Camilleri is - what inspires him and what makes him tick - then there is no better place to start than the new album from his band The Black Sorrows.

You could, of course, delve back into Camilleri's distinguished career and listen to his previous work with different incarnations of the Sorrows or his previous band Jo Jo Zep and The Falcons, one of Australia's greatest ever rockin' rhythm and blues bands. You might also like to check out his other side projects such as the Amazing Revelators or Bakelite Radio that explore his musical predilections.

If you want to see Camilleri perform live then you will get plenty of opportunities. With the Black Sorrows, he has played every major roots music festival in Australia - including Byron Bay's renowned Bluesfest (again in 2014). He is not only one of the best musicians in the land but also one of the hardest working; there is hardly a weekend when he isn't flying off to some far-flung gig.

You want blues, ballads, rock, country, gospel, swing, honky tonk? It is all here on Certified Blue and it contains some of the best songs that Camilleri has ever written with his long-time writing colleague Nick Smith.

Camilleri has used the 'Roarin' Town' title previously for an album but never for a song. Go figure! With a memorable piano motif and some carnival sounds he captures the story of two lovers moving to the big smoke and having their lives changed irreparably.

With its swelling string section 'Certified Blue' is an old school soul ballad that Otis Redding might be proud of - and Camilleri should be.

Listen carefully to 'Can't Give Up On You' and you might envisage the Rolling Stones performing it. (Camilleri was booted out of his first band for sounding too much like Mick Jagger!)

'Wake Me Up In Paradise,' 'Lovers Waltz' and 'The Big Heartache' prove that Camilleri is as fine a crooner as he is rocker on three of the best ballads he has ever recorded. Then on the more strident ballad 'Call Me A Fool' you can hear Camilleri channelling Ray Charles, another one of his idols.

With its gospel and country overtones 'Save Me' returns us to the classic Black Sorrows mode with the infectious sing-along chorus which is sure to make the song a concert favourite.

Camilleri dabbled with the big band format and the raucous 'Return Of The Voodoo Sheiks,' is a perfect example of that experiment with its driving rhythm and wild horns.

The eerie 'Righteous Blues' is a short, sharp classic blues that might have sprung out of a Southern jazz club with a lead clarinet, a spooky refrain and a story that involves the Bible and a gun (always a deadly combination).

With its pedal steel refrain and infectious chorus the countrified 'Man Of Straw' could have come straight out of Bakersfield or even Nashville. It shows the country side of Camilleri and his band, which on the evidence here can play anything!

Boogie-woogie piano kicks off the great blues rocker 'Devil Came Knockin' On Sunday' but there is no deal at the crossroads here; instead it is a story of temptation and regret.

Hiding towards the end of the album, the beautiful 'Until I Make You Mine' has a definite gospel feel with Camilleri's falsetto dominating but the theme is much more secular. Maybe you'll be reminded of Sam Cooke in his days with the Soul Stirrers. High praise indeed.

Continuing the religious reference is 'Dear Lord', with its marching band beat,  and call for guidance is has echoes of Van Morrison, one of Camilleri's heroes  who he recently paid tribute to in concert. In fact, the jazzy 'Gates Of Hell' might have been inspired by that because it sounds like it could have come off a session for Astral Weeks sung by Curtis Mayfield!

Listen to Certified Blue a few times and you will start to wonder if there is anything that Joe and his band cannot play! The album is a wonderful encapsulation of the talents of a great musician. Try it and I think you will agree.