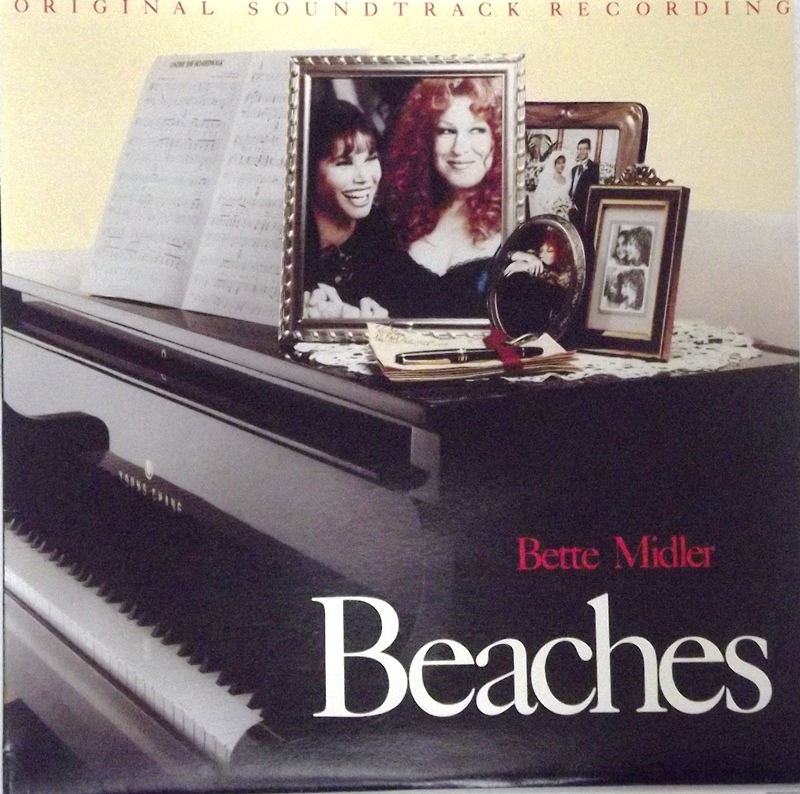 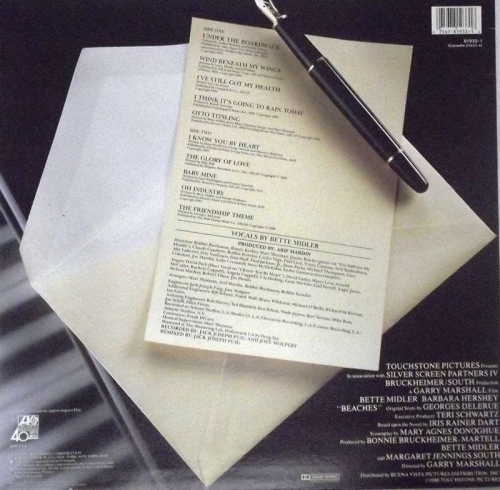 Beaches: Original Soundtrack Recording is the soundtrack to the Academy Award nominated 1988 film starring Bette Midler and Barbara Hershey. Midler performs most of the tracks on the album, released on the Atlantic Records label. The album features one of Midler's best known songs, the ballad "Wind Beneath My Wings", which was a #1 hit.

The track that was chosen to promote both the movie and the album was not "Wind Beneath My Wings", but the song heard in the movie's opening scene and also the opening track on the album: Midler's cover of The Drifters' 60s classic "Under the Boardwalk". That song alluded to the title of the movie and the place where the movie's main characters, rich girl Hillary Whitney (Barbara Hershey) and child performer Cecilia Carol "CC" Bloom (Midler) first meet. Midler's version of "Under the Boardwalk", released to tie in with the premiere in December 1988, peaked outside the Billboard Hot 100 chart and passed by mostly unnoticed.

"Wind Beneath My Wings", which had been recorded by several other artists before Midler in the early 1980s, among them Sheena Easton, Roger Whittaker, Gary Morris, Gladys Knight & the Pips and Lou Rawls, was released as the second single in the Spring of 1989, following the box office success of the movie. The song instantly became a #1 hit on the US singles chart, reached #2 on the Adult Contemporary chart, #3 in the UK, #1 in Australia and was a top 10 hit single in many other parts of the world. Midler's recording of the song was later awarded a platinum disc by the RIAA for sales exceeding one million copies in the US alone.[2] It also won Grammys for Record of the Year and Song of the Year at the Grammy Awards of 1990, and remains Midler's signature tune to this day. The recording of the song appearing in the film is notably different from the one released on the soundtrack, and the movie also includes an orchestral version over the end credits.

The remainder of the soundtrack musically follows C.C. Bloom's rise to fame as an artist, from doing Cole Porter standards like "I've Still Got My Health" to moderately appreciative audiences in dive bars, appearing in burlesque shows singing about the supposed German inventor of the brassiere ("Otto Titsling", a song Midler herself had co-written and which had already appeared on her 1985 album Mud Will Be Flung Tonight), joining an experimental theater group ("Oh Industry"), to becoming a successful pop star ("I Know You by Heart", a duet with David Pack, only briefly heard in the movie) with the right to record material of her own choosing (Randy Newman's "I Think It's Going to Rain Today").

A recurring theme in the movie is Billy Hill's old swing standard "The Glory of Love", first made famous by Benny Goodman in the mid-1930s. In Beaches the song is first reluctantly sung as an upbeat showtune by a very young C.C. Bloom at an audition in the company of her overbearing stage mother. In the final scene the song is performed as a ballad by the character as an adult, and then in the context of the movie taking on an entirely different meaning.

The track "Baby Mine", originally from Walt Disney's 1941 movie Dumbo, was released in two versions with slightly different arrangements; one on the original vinyl album and another on the CD edition.

The only track on the album not to involve Midler is "The Friendship Theme" from the movie's score, composed by Georges Delerue in his only work for a Garry Marshall film.

The Beaches soundtrack is the best-selling album of Midler's career to date, peaking at #2 on the Billboard 200 albums chart, #21 in the UK, #1 in Australia and eventually achieving triple platinum status in the US for having sold more than three million copies.[2] It also reunited her with producer Arif Mardin.