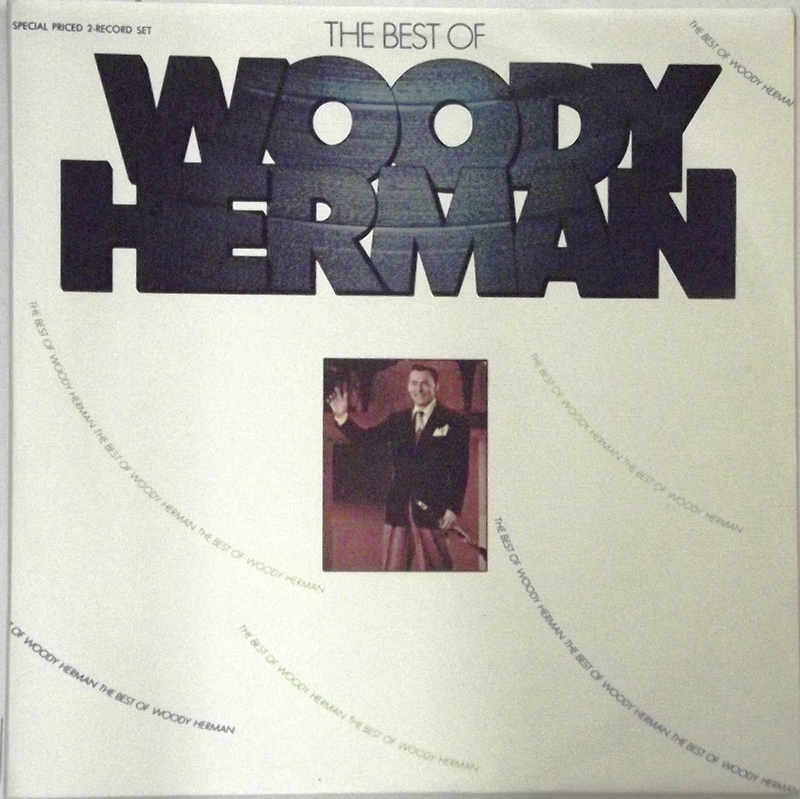 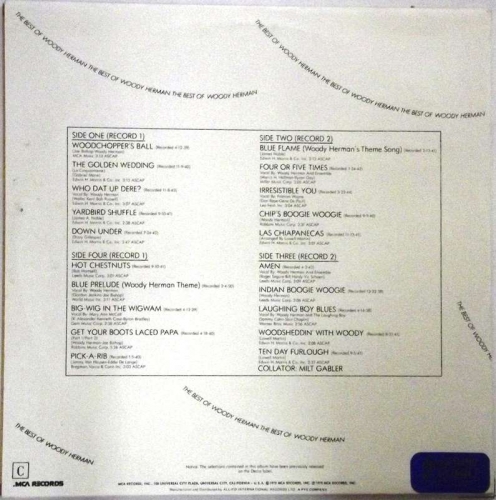 The Best Of Woody Herman

Woodrow Charles "Woody" Herman (May 16, 1913 – October 29, 1987) was an American jazz clarinetist, alto saxophonist, singer, and big band leader. Leading various groups called "The Herd", Herman was one of the most popular of the 1930s and 1940s bandleaders. His bands often played music that was experimental for its time. He was a featured halftime performer for Super Bowl VII.[1]

Herman was born Woodrow Charles Thomas Herman in Milwaukee, Wisconsin, on May 16, 1913.[2] His parents were Otto and Myrtle (Bartoszewicz) Herman.[3][4] His mother was Polish.[5] His father had a deep love for show business and this influenced Woody Herman at an early age.[6] As a child he worked as a singer and tap-dancer in Vaudeville, then started to play the clarinet and saxophone by age 12.[7] In 1931, he met Charlotte Neste, an aspiring actress;[8] they married on September 27, 1936.[9] Woody Herman joined the Tom Gerun band and his first recorded vocals were "Lonesome Me" and "My Heart's at Ease".[10] Herman also performed with the Harry Sosnick orchestra,[11] Gus Arnheim and Isham Jones.[12] Isham Jones wrote many popular songs, including "It Had to Be You" and at some point was tiring of the demands of leading a band. Jones wanted to live off the residuals of his songs; Woody Herman saw the chance to lead his former band,[13] and eventually acquired the remains of the orchestra after Jones' retirement.

Woody Herman's first band became known for its orchestrations of the blues, and was sometimes billed as "The Band That Plays The Blues". This band recorded for the Decca label, at first serving as a cover band, doing songs by other Decca artists.[14] The first song recorded was "Wintertime Dreams" on November 6, 1936. In January 1937 George T. Simon closed a review of the band with the words: "This Herman outfit bears watching; not only because it's fun listening to in its present stages, but also because it's bound to reach even greater stages."[15] After two and a half years on the label, the band had its first hit, "Woodchopper's Ball" recorded in 1939.[16] Woody Herman remembered that "Woodchopper's Ball" started out slowly at first. "[I]t was really a sleeper. But Decca kept re-releasing it, and over a period of three or four years it became a hit. Eventually it sold more than five million copies—the biggest hit I ever had."[17] Other hits for the band include "The Golden Wedding" and "Blue Prelude".[18] Musicians and arrangers that stand out include Cappy Lewis on trumpet and Dean Kincaide, a big band arranger.[18]

In jazz, swing was gradually being replaced by bebop. Dizzy Gillespie, a trumpeter and one of the originators of bop, wrote three arrangements for Woody Herman, "Woody'n You", "Swing Shift" and "Down Under". These were arranged in 1942.[19] "Woody'n You" was not used at the time. "Down Under" was recorded November 8, 1943. The fact that Herman commissioned Gillespie to write arrangements for the band and that Herman hired Ralph Burns as a staff arranger, heralded a change in the style of music the band was playing.[20]

In February 1945, the band started a contract with Columbia Records.[21] Herman liked what drew many artists to Columbia, Liederkranz Hall, at the time the best recording venue in New York City. The first side Herman recorded was "Laura", the theme song of the 1944 movie of the same name.[22] Herman's version was so successful that it made Columbia hold from release the arrangement that Harry James had recorded days earlier.[23] The Columbia contract coincided with a change in the band's repertoire. The 1944 group, which he called the First Herd, was famous for its progressive jazz. The First Herd's music was heavily influenced by Duke Ellington and Count Basie. Its lively, swinging arrangements, combining bop themes with swing rhythm parts, were greatly admired. As of February 1945 the personnel included Bill Harris, Sonny Berman, Pete Candoli, Billy Bauer (later replaced by Chuck Wayne), Ralph Burns, Davey Tough and Flip Phillips.[24] On February 26, 1945 in New York City, the Woody Herman band recorded "Caldonia".[25]

Neal Hefti and Ralph Burns collaborated on the arrangement of "Caldonia" that the Herman band used.[26] "Ralph caught Louis Jordan [singing "Caldonia"] in an act and wrote the opening twelve bars and the eight bar tag."[25] "But the most amazing thing on the record was a soaring eight bar passage by trumpets near the end." These eight measures have wrongly been attributed to a Gillespie solo, but were in fact originally written by Neal Hefti.[24] George T. Simon compares Hefti with Gillespie in a 1944 review for Metronome magazine saying, "Like Dizzy [...], Hefti has an abundance of good ideas, with which he has aided Ralph Burns immensely".[27]

In 1946 the band won Down Beat, Metronome, Billboard and Esquire polls for best band, nominated by their peers in the big band business.[28] Along with the high acclaim for their jazz and blues performances, classical composer Igor Stravinsky wrote the Ebony Concerto, one in a series of compositions commissioned by Herman with solo clarinet, for this band. Herman recorded this work in the Belock Recording Studio in Bayside New York.[29]

Throughout the history of jazz, there have always been musicians who sought to combine it with classical music.[30] Ebony Concerto is one in a long line of music from the twenties to the present day that seeks to do this. Herman said about the Concerto: "[The Ebony Concerto is a] very delicate and a very sad piece."[31] Stravinsky felt that the jazz musicians would have a hard time with the various time signatures. Saxophonist Flip Philips said, "During the rehearsal [...] there was a passage I had to play there and I was playing it soft, and Stravinsky said 'Play it, here I am!' and I blew it louder and he threw me a kiss!"[32] In his own original way Stravinsky noticed the massive amount of smoking at the recording session: "the atmosphere looked like Pernod clouded by water."[33] Ebony Concerto was performed live by the Herman band on March 25, 1946 at Carnegie Hall.[34]

Despite the Carnegie Hall success and other triumphs, Herman was forced to disband the orchestra in 1946 at the height of its success. This was his only financially successful band; he left it to spend more time with his wife and family. During this time, he and his family had just moved into the former Hollywood home of Humphrey Bogart and Lauren Bacall. One reason Herman may have disbanded was his wife Charlotte's growing problems with alcoholism and pill addiction. Charlotte Herman joined Alcoholics Anonymous and gave up everything she was addicted to. Woody said, laughing, "I went to an AA meeting with Charlotte and my old band was sitting there."[35] Many critics cite December 1946 as the actual date the big-band era ended, when seven other bands, in addition to Herman's, dissolved.[36]