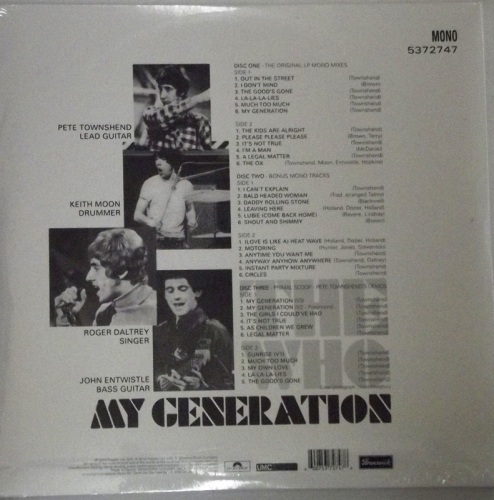 In the half century since its release The Who’s debut album MY GENERATION has lost none of it’s raw visceral power and still stands as the ultimate musical declaration of teenage rebellion. The title track alone has been covered innumerable times by the likes of Oasis, Green Day, Patti Smith, Billy Joel, Alice Cooper and Iron Maiden amongst many more.

Back in 1965 the band were considered to be so dangerous that the tailors tasked with turning a Union Jack into a pop art mod jacket for the cover feared that they would be jailed for desecration of the nation’s flag.

The Who’s surly demeanour that day in 1965 at London’s Surrey Docks and the brazen appropriation of the symbol of state is the best advert possible for MY GENERATION It’s an album that sounds like it looks: terse, confrontational and full of youthful angst and energy.

Brunswick Records first issued MY GENERATION in the UK in December 1965, and later in the US, under the title THE WHO SINGS MY GENERATION, in April 1966. It was produced by Shel Talmy who shot to fame with his work with The Kinks, a group that the teenage Pete Townshend admired greatly.

Pete Townshend commented, “Gathering these demos for this collection has been enjoyable; it’s wonderful for me to have these tapes made fifty-two years ago to listen to. I hope you enjoy them. They have a naiveté and innocence, a simplicity and directness, and an ingenuousness that reveals me as a young man struggling to keep up with the more mature and developed men around me. What an incredible group of strong, talented, young and engaging men they were!”