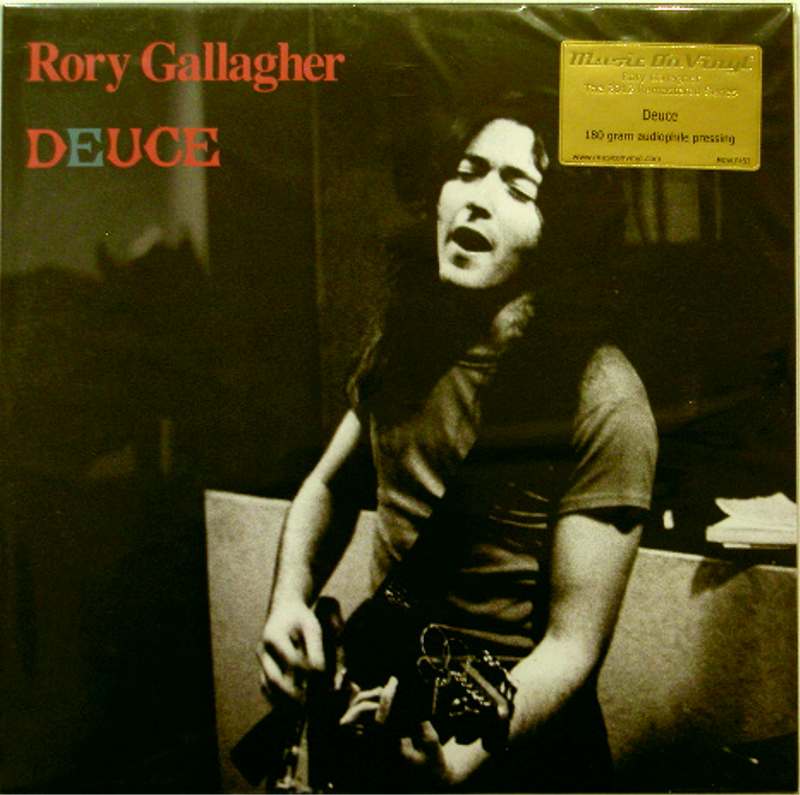 Deuce is the second solo album by Rory Gallagher, released in 1971. In contrast with his previous album, Rory Gallagher, where Gallagher tried for a precise, organised sound, Deuce was his first of many attempts to capture the energy of a live performance in the studio.[5]

Deuce opens with the Celtic, jazz-tinged, blues style of "I'm Not Awake Yet", which captures folk elements as well as jazz and Celtic style. It is then followed by the classic Gallagher guitar riff of "Used to Be", the raw energetic, crystal vocal is ably complimented by his rhythm section of Wilgar Campbell on drums and Gerry McAvoy on bass. Switching to twelve-stringed guitar with rack-mounted harmonica, "Don't Know Where I'm Going" serves as a homage to the 'troubadour' blues from Sonny Terry and Brownie McGee, through to Bob Dylan. The opening, up-tempo open-chorded tuning on "Maybe I Will" deceives the light and shade of pace to follow, as the rhythmic track winds through Gallagher's wide-ranging guitar playing. "Whole Lot of People", with its intricate open-tuned guitar picking, introduces the maestro of the slide guitar. The sharpness of this playing masks the lyrics of the politics of the then emerging and troubled 'new' Ireland. This theme is continued through into "In Your Town". This tells a tale of jailbreak, the hidden sentiment being the much resented, internment (without trial) that had just come into force a month earlier in Northern Ireland. Much loved by the fans, it became an essential live standard that would often close Rory's live shows. The theme of the track would later inspire Thin Lizzy's "Jailbreak". "Should've Learnt My Lesson" demonstrates Rory's lyrical command of the blues song, with Elvis Presley to Muddy Waters, very much to the fore. Ironically, one month following this release, Waters, his hero endorsing the world-wide musical esteem Gallagher was now held in. With its abstract start, "There's A Light" tells of Gallagher's contentment in his own skin and surroundings at that time. Employing and enjoying his range of jazz influences, Gallagher scat sings his lyrics, while harmonizing with his guitar and subtly knocks off harmonic notes on his instrument. Back on the acoustic, Rory solos through "Out Of My Mind", a country-blues track-and is at his picking finger best. Gallagher had immense respect for musicians such as Doc Watson (who incidentally, played a US-made Gallagher guitar) and for many of the Nashville pickers. The album's crescendo, "Crest of a Wave" is a two tempo-ed track which gives more expansion to Rory's guitar work from the swirling 'Leslie' sound through to the slide guitar tour-de-force, intertwining with Campbell's percussion patterns and McAvoy's solid bass.