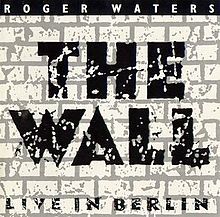 The Wall – Live in Berlin was a live concert performance by Roger Waters and numerous guest artists, of the Pink Floyd studio album The Wall, itself largely written by Waters during his time with the band. The show was held in Berlin on 21 July 1990, to commemorate the fall of the Berlin Wall eight months earlier. A live album of the concert was released 21 August 1990. A video of the concert was also commercially released.

The concert was staged on vacant terrain between Potsdamer Platz and the Brandenburg Gate, a location that was part of the former "no man's land" of the Berlin Wall.

"I did an interview a couple of years ago for a guy called Redbeard…" Waters recalled. "He said, 'Would you ever perform The Wall again on stage?' And I said, 'No'… Indoors, it made no sense financially; it's too expensive. And, as it's partially an attack on the inherently greedy nature of stadium rock shows, it would be wrong to do it in stadiums… I said, 'Well, I might do it outdoors if they ever take the wall down in Berlin.'… The Memorial Fund was in a council meeting, and felt they needed some kind of an event to focus attention on it… So I agreed to have a meeting with Leonard Cheshire. And I was very impressed, and said I would do what I could, although I thought it was very unlikely that it would come off… Then, in November [1989], when the wall started coming down, we started negotiating."[5]

The show had a sell-out crowd of over 350,000 people. Right before the performance started the gates were opened which enabled at least another 100,000 people to watch.[6] While this broke records for a paid-entry concert, seven days earlier Jean-Michel Jarre had set a new world record for concert attendance, with his free Paris la Défense show attracting a live audience of two million.

The event was produced and cast by British impresario and producer Tony Hollingsworth. It was staged partly at Waters' expense. While he subsequently earned the money back from the sale of the CD and video releases of the album, the original plan was to donate all profits past his initial investment to the Memorial Fund for Disaster Relief, a UK charity founded by Leonard Cheshire. However, audio and video sales came in significantly under projections, and the trading arm of the charity (Operation Dinghy) incurred heavy losses. A few years later, the charity was wound up, and the audio and video sales rights from the concert performance returned to Waters.

The production was designed by Mark Fisher and Jonathan Park.[7][8][9] The stage design featured a 550-foot-long (170 m) and 82-foot-high (25 m) wall. Most of the wall was built before the show and the rest was built progressively through the first part of the show. The wall was then knocked down at the end of the show.[10]

Initially, Waters tried to get guest musicians like Peter Gabriel, Bruce Springsteen and Eric Clapton but they were either unavailable or turned it down. Both Rod Stewart, who was to sing "Young Lust", and Joe Cocker were confirmed to appear but when the original planned concert date was put back both were unavailable.[11] Also, on the same 1989 interview with Redbeard, Waters stated that "I might even let Dave play guitar." On 30 June 1990 backstage at the Knebworth Pink Floyd performance at Knebworth '90, during a pre-show interview, David Gilmour responded to Roger's statement on an interview with Kurt Loder on MTV by saying that "he and the rest of Pink Floyd (Nick Mason and Rick Wright) had been given the legal go-ahead to perform with Roger but had not been contacted" and "he never asked us" (in a fake crying voice) with Nick Mason saying "if only that phone can ring". Two days later, on 2 July 1990 Waters appeared on the American rock radio call-in show Rockline and contradicted his Gilmour invite by saying, "I don't know where Dave got that idea". Also Rush drummer Neil Peart revealed in a 2013 interview with Classic Rock Magazine that he tried to get involved to play drums but Roger turned him down in favour of Graham Broad.

This performance had several differences from Pink Floyd's original production of The Wall show. Both "Mother" and "Another Brick in the Wall, Part II" (like in the 1980/81 concerts) were extended with solos by various instruments and the latter had a cold ending. "In The Flesh" (also like the 1980/81 concerts) has an extended intro, and "Comfortably Numb" featured dueling solos by the two guitarists as well as an additional chorus at the end of the song. "The Show Must Go On" is omitted completely, while both "The Last Few Bricks" and "What Shall We Do Now?" are included ("The Last Few Bricks" was shortened). Also, the performance of the song "The Trial" had live actors playing the parts, with Thomas Dolby playing the part of the teacher hanging from the wall, Tim Curry as the prosecutor, and Albert Finney as the Judge. The repeated proclamation of "Tear down the wall!" and subsequent destruction of the on-stage wall was for this show accompanied by a projection of a section of the actual Berlin Wall on the cardboard bricks used on stage. The show officially ended with "The Tide Is Turning", a song from Waters' then-recent solo album Radio K.A.O.S. The Wall's original closing number, "Outside the Wall," was affixed to the end of "The Tide is Turning."

The Wall – Live in Berlin was released as a live recording of the concert, and the Laserdisc video in NTSC can still be found through second sourcing. A DVD was released in 2003 in the U.S. by Island/Mercury Records and internationally by Universal Music (Region-free).

Hollingsworth's company Tribute, a London-based "good causes" campaign company, sold worldwide television rights, with 52 countries showing the two-hour event. Twenty countries showed up to five repeats of the show and 65 countries broadcast a highlights show. There was also distribution of a double music CD and post-production VHS videotape by Polygram.