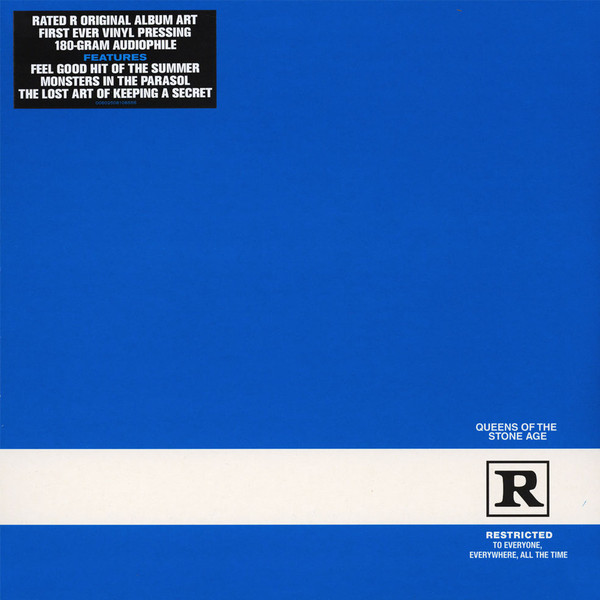 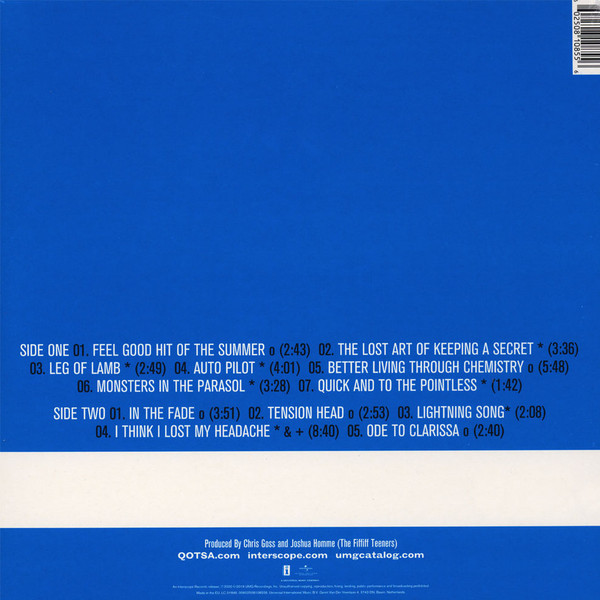 Rated R (also known on vinyl as Rated X and Rated RX on 2010 deluxe edition) is the second studio album by American rock band Queens of the Stone Age, released on June 6, 2000 by Interscope Records. It was the band's first album for the label, as well as their first to feature bassist Nick Oliveri and vocalist Mark Lanegan.

Rated R was a critical and commercial success and became the band's breakthrough album, peaking at number 54 in the UK and eventually being certified gold by the BPI. Two singles were released from the album: "The Lost Art of Keeping a Secret" and "Feel Good Hit of the Summer", with the former helping the band reach mainstream popularity.

Rated R has been described as featuring stoner rock,[1][2][3] alternative rock,[4] hard rock,[5] and alternative metal.[6] The album contains numerous references to drugs and alcohol. This is particularly prominent on the opening track, "Feel Good Hit of the Summer", which consists entirely of the repeated verse "Nicotine, valium, vicodin, marijuana, ecstasy and alcohol" followed by a chorus of "c-c-c-c-c-cocaine". Though frontman Josh Homme has emphasized the fact there is no definitive endorsement or condemnation behind the lyrics, he has confirmed he came up with the lyrics stumbling through the desert at night after a New Year's party, trying to remember what exactly he had consumed that evening leaving him so intoxicated.[7]

Following the theme, "Monsters in the Parasol", which originally appeared on the Desert Sessions album, Volume 4: Hard Walls and Little Trips, is about Homme's first experience on LSD, kicking in just as his friends' father and sister came home leading to a bad trip.[7] The song "Better Living Through Chemistry" offers an opposing stance on prescription drugs, while Homme's favorite song from the album closer, "I Think I Lost My Headache", is described as being about "Paranoia... when you think something strange is going on, and everyone around you is so adamant about telling you it's fine... but then you start thinking 'Wouldn't that be exactly what you'd say if you didn't want me to know, and there is something going on?' And so it's kind of about that paranoid mentality which maybe I have sometimes."[8] The song is also notable for its unconventional intro and outro in the 15/8 time signature, with the outro culminating in several minutes of an incessantly jarring and repetitive horn part, added to punish those who may have fallen asleep listening to the album.[7]

Rated R features the debut of bassist Nick Oliveri and guest vocalist Mark Lanegan, who both made vocal and songwriting contributions to the band. In addition to providing backing vocals for "Auto Pilot" and "I Think I Lost My Headache", Lanegan sang lead vocals on "In the Fade", a song about clarity following a comedown/sobriety, while Oliveri sang "Tension Head", a re-recording of the song "13th Floor" off Oliveri's Mondo Generator's debut album Cocaine Rodeo, and "Quick and to the Pointless", which follows the singer's experiences on heroin and speed, and cocaine and meth, respectively. "Quick and to the Pointless'" drum, bass, guitar and vocal tracks were recorded simultaneously in just one take. Oliveri's vocal performance was originally intended to be a scratch vocal, but the band liked it so much that this original recording remained on the finished song including the two verses in Dutch.[9]

One of the few songs not involving drug use is the albums' lead single, "The Lost Art of Keeping a Secret", which is a response by Homme to people who had lost his trust, particularly involving trysts.[7] Another one, the acoustic instrumental "Lightning Song" was penned by touring keyboardist, second guitarist, and lap steel player Dave Catching.