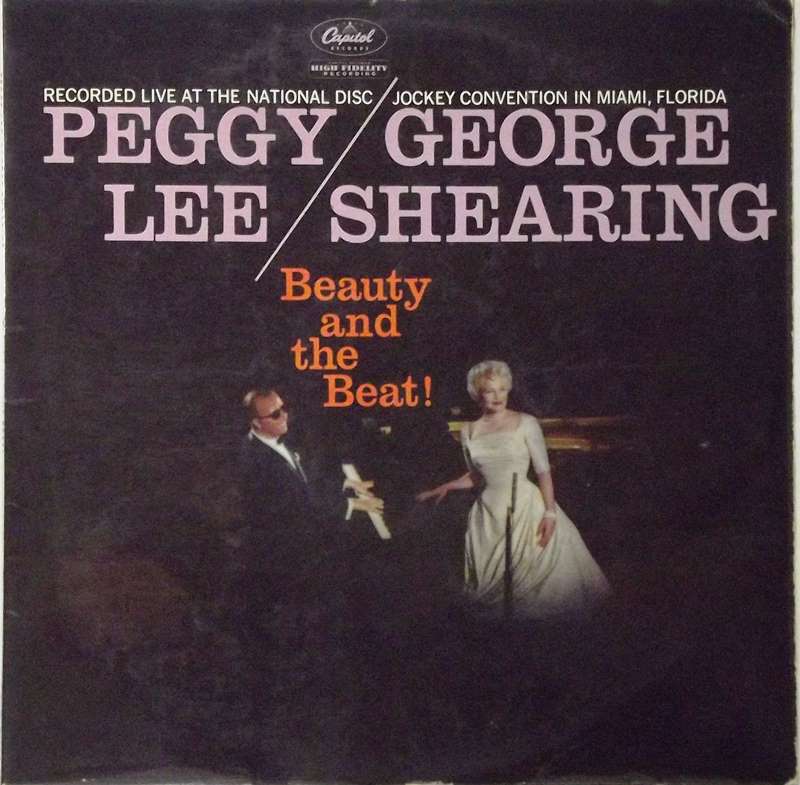 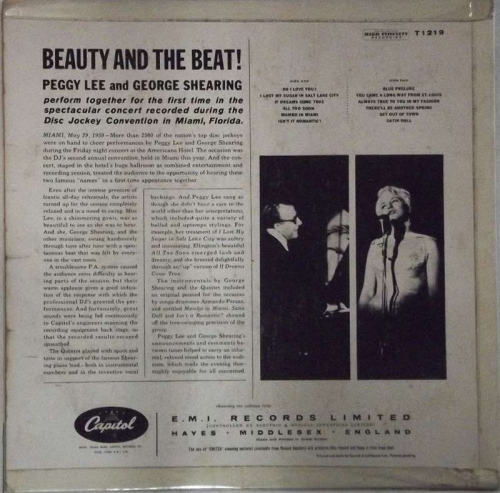 Beauty And The Beat!

Beauty and the Beat! is a 1959 album (see 1959 in music) by Peggy Lee, accompanied by the George Shearing Quintet.

Beauty and the Beat! Peggy Lee and Gerge Shearing perform together for the first time in the spectacular concert recorded during the Disc Jockey Convention in Miami, Florida.

Miami, May 29, 1959 - More than 2500 of the Nation's top disc jockeys were on hand to cheer performances by Peggy Lee and George Shearing during the Friday night concert at the American Hotel. The occasion was the DJ's second annual convention, held in Miami this year. And the concert, staged in the hotel's huge ballroom as combined entertainment and recording session, treated the audience to the opportunity of hearing these two famous "names" in a first-time appearance together.

Even after the intense pressure of frantic all-day rehearsals, the artists turned up for the session completely relaxed and in a mood to swing. Miss Lee, in a shimmering gown, was as beautiful to see as she was to hear. And she, George shearing, and the other musicians, swung handsomely through tune after tune with a spontaneous beat that was felt by everyone in the vast room.

A troublesome P.A. system caused the audience some difficulty in hearing parts of the session, but their warm applause gives a good indication of the response with which the professional DJ's greeted the performances. And fortunately, great sounds were being fed continuously to Capitol's engineers manning the recording equipment back stage, so that the recorded results escaped unscathed.

The Quintet played with spirit and taste in support of the famous Shearing piano lead - both in instrumental numbers and in the inventive vocal backings. And Peggy Lee sang as though she didn't have a care in the world other than her interpretations, which included quite a variety of ballad and uptempo stylings. For example, her treatment of I Lost My Sugar In Salt Lake City was sultry and insinuating. Ellington's beautiful All Too Soon emerged lush and dreamy, and she breezed delightfully through an "up" version of If Dreams Come True. The instrumentals by George Shearing and the Quintet included an original penned for the occasion by conga drummer Armando Peraza, and entitled Mambo in Miami. Satin Doll and Isn't it Romantic? showed off the free-swinging precision of the group.

Peggy Lee and George Shearing's announcements and comments between tunes helped to carry an informal, relaxed mood across to audience, which made the evening thoroughly enjoyable for all concerned.

Stereo Note: Excellent stereo recording takes the listener to a reserved table in Miami on concert night. On stage, Peggy Lee is performing up towards the footlights and at center. George Shearing is over towards the right, along with vibes and guitar. And, at the listener's left are bass, drums and conga drums. Stereo vividly spotlights the placement of each artist, and gives crisp, at-the session clarity to their blended sound.