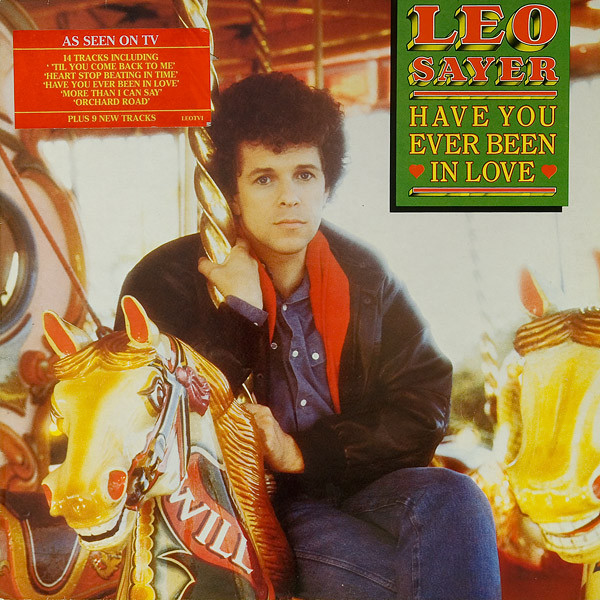 Have You Ever Been In Love

Have You Ever Been in Love is the tenth studio album by recording artist Leo Sayer. It was originally released in November 1983 by Chrysalis (UK), and Warner Bros. (US) as the follow-up to his ninth album World Radio (1982). It was co-produced by the Grammy Award-winning Arif Mardin, in association with Alan Tarney, and Christopher Neil producing the other tracks. Sayer is credited as co-writer on the tracks "Don't Wait Until Tomorrow", and "Orchard Road".

The album reached no.15 on the UK Albums Chart.,[1] making it (including the greatest hits compilation album, The Very Best of Leo Sayer) his eleventh successive Top 50 chart entry in the UK Albums Chart, in a period of a little over nine years. The album spawned three singles which first two reached the top sixty on the UK Singles Chart, including "Orchard Road", which would become one of Sayer's most popular songs, this would also become the last Sayer single to make the Top 20, peaking at number 16 and spending nine weeks on the chart.[2] According to Sayer, the lyrics to "Orchard Road" are based on an all-night phone conversation out in a public telephone booth he had with his then wife, pleading for her return from her flat and forgiveness after a lapse of judgement in their seven-year marital life. Orchard Road in reality, refers to Churchfield Road, Acton in Greater London where his ex-wife Janice had moved out to,[3] Sayer changing it to "Orchard Road" as "Churchfield Road" "didn't sing very well".[4]