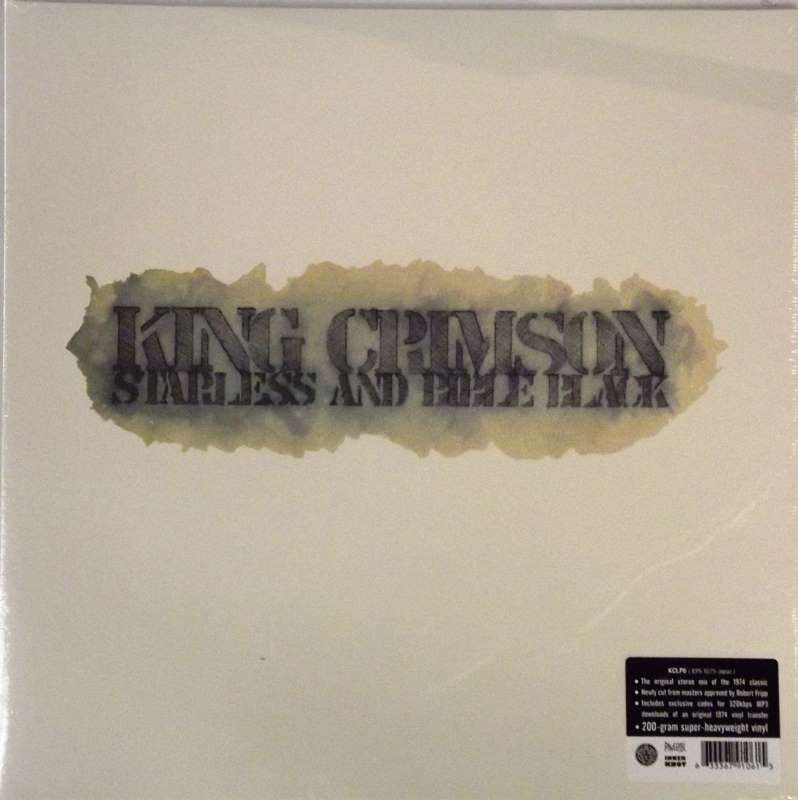 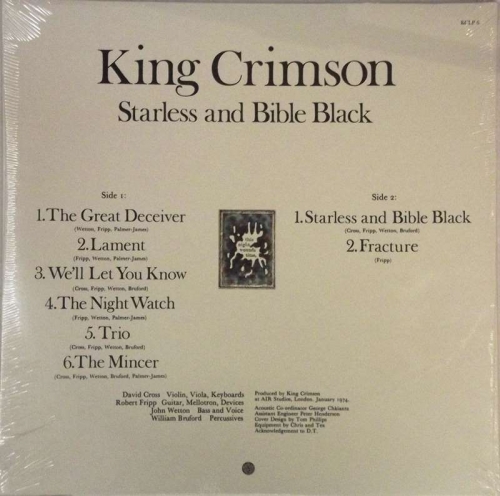 Starless and Bible Black is the sixth studio album by the British progressive rock band King Crimson, released in 1974. Much of the album was actually recorded live, but painstakingly edited and blended with studio material.

King Crimson's previous album, Larks' Tongues in Aspic (in which they'd moved decisively away from a more traditional progressive rock sound drawing on American jazz, and towards the influence of European free improvisation) had been recorded by a quintet lineup of the band, including experimental percussionist Jamie Muir. Early in 1973, Muir abruptly left the band - ostensibly due to an onstage injury, but in fact due to an overwhelming spiritual need to retreat from music and spend time in a monastery (something which was not communicated to his bandmates). Muir's departure turned out to be permanent. The band's drummer, Bill Bruford, absorbed Muir's percussion role in addition to his own kit drumming, and the band continued to tour as a quartet.

These upheavals and the pressure of touring left King Crimson short of new written material when it came to the time to record their next album. Having increased their level of onstage improvisation during recent tours, the band opted to take advantage of this to solve the problem. New compositions tried out in concert and captured on several live recordings were presented as part of the new album material, alternating and in some cases blending with studio recordings.

The only songs recorded entirely in the studio were the first two tracks, "The Great Deceiver" and "Lament". "We'll Let You Know" was an entirely improvised piece recorded in Glasgow. "The Mincer" was another improvised piece, originally recorded in concert in Zürich but overdubbed with Wetton's vocals in the studio. "Trio", "Starless and Bible Black" and "Fracture" (the last of which Robert Fripp has cited as one of the most difficult guitar pieces he has ever played[1]) were recorded live at the Concertgebouw in Amsterdam. Also recorded at the Concertgebouw was the introduction to "The Night Watch" (the band's Mellotron broke down at the start of the next section, meaning that the remainder of the song needed to be recorded in the studio and dubbed in later). In all cases, live applause was removed from the recordings wherever possible (although the remains of it can be heard by an attentive listener). The complete Amsterdam Concertgebouw concert was eventually released by the band in 1997 as The Night Watch.

"Trio" was notable for being a quartet piece with only three active players - John Wetton on bass guitar, David Cross on viola, and Robert Fripp on "flute" Mellotron. Bruford spent the entire piece with his drumsticks crossed over his chest, waiting for the right moment to join in but realising that the improvised piece was progressing better without him. His decision not to add any percussion was seen by the rest of the band as a crucial choice, and he received co-writing credit for the piece.[2] "Trio" was later included on the 1975 compilation album A Young Person's Guide to King Crimson, the performance credits of which cite Bruford's contribution to the piece as having been "admirable restraint."

Only four tracks on the album have lyrics. As had been the case with Larks' Tongues in Aspic, these were written by John Wetton's friend Richard Palmer-James (the former Supertramp guitarist who'd left the band after its first, self-titled album). "The Great Deceiver" refers to The Devil and is an ironic commentary on commercialism (Fripp contributed the line "cigarettes, ice cream, figurines of the Virgin Mary" after seeing souvenirs being marketed in Vatican City).[3] "Lament" is about fame. "The Night Watch" is a short essay on Rembrandt's painting of the same name, describing the painting as an observer sees it and attempting to understand the subjects.[3]

The phrase "Starless and Bible Black" is a quotation from the first two lines of poet Dylan Thomas's play, Under Milk Wood.[4] The band's next album, Red, contains a song called "Starless", which actually contains the phrase "Starless and bible black", whereas "Starless and Bible Black" is an improvised instrumental. The title track on both the album and the compact disk is actually an edit of the original Amsterdam improvisation as performed at the Concertgebouw, which presumably ran several minutes longer (as improvisations of this tour often did). (The sleevenotes included with the CDs indicate that it was cut short for the 1973 album "due to the constraints of vinyl"). All currently-available master tapes contain the 9:11 version.

The album art is by painter Tom Phillips. The phrase "this night wounds time", which appears on the back cover, is a quotation from Phillips's signature work, the "treated novel" A Humument (p. 222).