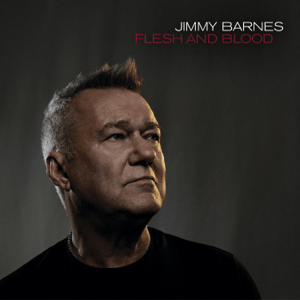 Flesh and Blood is the 19th studio album by Australian musician Jimmy Barnes, released on 2 July 2021. The album was announced on 25 March and features production from Barnes' long-time collaborator Kevin Shirley. Barnes wrote most of the record while in the peak of the COVID-19 lockdown restrictions in 2020.[4]

The title track was released on 25 March 2021 as the album's lead single. Barnes premiered the song at Michael Gudinski's state funeral on 24 March, at the request of Gudinski's son Matt. Barnes said "It's about the unbreakable bonds that bind us to our families through all of life's ups and the downs. Without Jane, my kids and grandkids I wouldn't be here today. The song has taken on an extra meaning for our family since Michael's passing. When I say he was a brother to me, I mean that in every sense. We could drive each other nuts sometimes but there was always a deep and loving connection there. I was so excited when I played the single to Michael. He was really pumped about it and we were both really looking forward to sharing this new record together."[1][5]

"Til the Next Time" was released digitally on 2 June 2021, as the second single.

On 24 June 2021, "Gateway to Your Heart" was released as the album's third single. Barnes said "This one's about the truth being the most important thing in relationships and also might be the gateway to heart."[3]