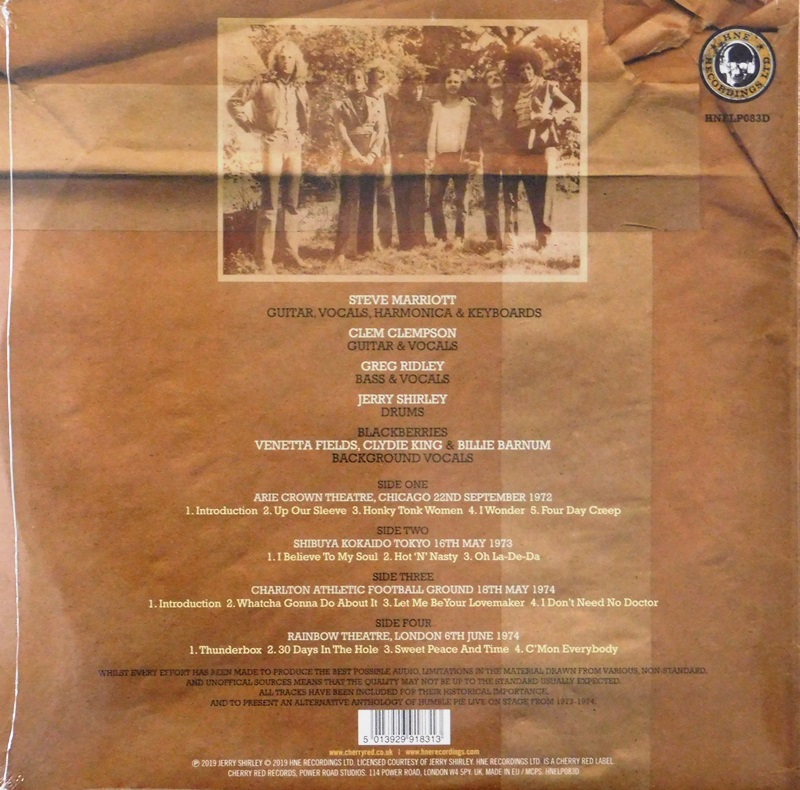 Humble Pie’s “Official Bootleg Collection Volume 1” is a raw testament to what this band did best; playing bluesy, gutsy, soulful and often hard rock, live on stage to an adoring audience. Drawn from a variety of mainly audience recordings that have previously only been available as “under the counter” pirate releases, this is an honest, and often unforgiving, tribute to a classic and much missed 70s supergroup.

• After two albums for Immediate, Humble Pie switched to A&M Records, and began their ascent to conquering the theatres, then arenas of North America, culminating in 1972’s double live “Performance: Rockin’ The Filmore”. Frampton would leave to pursue a highly successful solo career, to be replaced by Clem Clempson, and it was this line-up that was captured at the Arie Crown Theatre, Chicago on 22nd September 1972, whilst touring to promote that year’s “Smokin’” opus, from which ‘Hot ‘n’ Nasty’ and ‘C’mon Everybody’ were taken.

• With the band’s growing worldwide reputation, the band toured Japan, playing the Shibuya Kokaido in Tokyo on 16th May 1973, whilst promoting their “Eat It” album, from which Ray Charles’ ‘I Believe To My Soul’ was featured, and with a set that ended with a rip-roaring take of the Staple Singers’ ‘Oh La-De-Da’.

• There’s no doubting that the 70s saw some unmissable bills, and the show held at Charlton Athletic Football Ground on 18th May 1974 was no exception, where Humble Pie guested alongside Lou Reed and Bad Company at a concert headlined by The Who. Kicking off with the Small Faces’ debut classic ‘Whatcha Gonna Do About It’, Humble Pie were at the peak of their live powers before a capacity crowd, including ‘Thunderbox’, the title track from that year’s new LP, in their set. CD Three ends with four songs recorded at Finbury Park’s legendary Rainbow Theatre, on 6th June 1974.

• As well as plenty of rare memorabilia, the booklet features an essay from Malcolm Dome based on new interviews with Pie drummer, Jerry Shirley.

• Whilst every effort has been made to produce the best possible audio, limitations in the material drawn from various, non-standard, and unoffical sources means that the quality may not be up to the standard usually expected. All tracks have been included for their historical importance, and to present an alternative anthology of Humble Pie live on stage from 1972-1974.