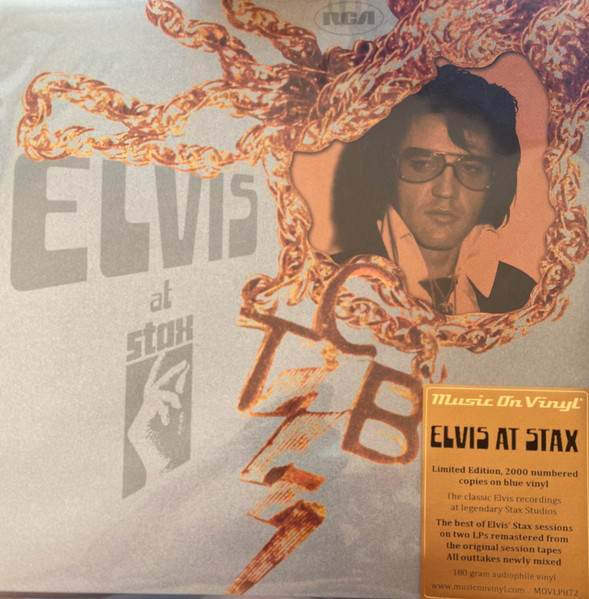 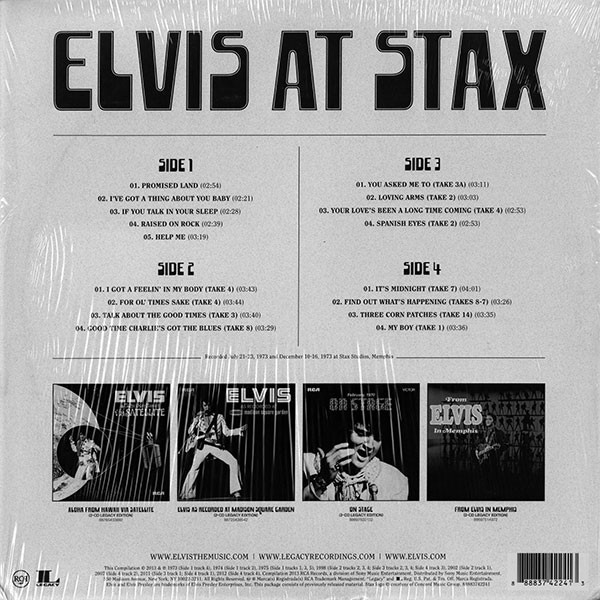 If there was an inherent flaw in the marketing and presentation of Elvis’ music during the ‘70s, it was undoubtedly the lack of visual distinction between his live and studio output. By the time Elvis’ last album featuring recordings from the Stax sessions was issued in January 1975, no fewer than 20 albums had been issued by RCA that featured Elvis on stage wearing a jumpsuit. This repetitious process, regulated by Elvis’ manager, Colonel Tom Parker, undeniably abetted a lack of clear focus on Elvis’ studio-recorded repertoire, and the presentation of his Stax tracks between 1973 and 1975 was no exception.

During the first few months of 1973 all seemed well when Elvis, after signing a lucrative new seven-year contract in March, subsequently hit the coveted #1 spot with the live album Aloha From Hawaii Via Satellite in May. However, within months, the creative thinking went rapidly downhill as RCA, eager to ride on Elvis’ renewed chart-topping status and recoup its financial outlay, cobbled together a July album release that consisted mainly of session leftovers. Imaginatively called Elvis and housed in a sleeve that featured an obligatory live-on-stage shot, it only managed to reach #52 in the album chart.

In the same month, Elvis received polite notification from RCA of his new contractual obligation. Amongst other things, it advised that a recording session needed to take place in the month of July at a studio of Elvis’ choosing. With some haste, the legendary Stax Studio complex on McLemore Avenue in Memphis was booked for four nights. Disappointingly, only nine songs were completed over this period due to technical issues with the studio andElvis’ acknowledged disenchantment with several of the new compositions submitted. Despite this, two songs were considered strong enough for A-sidesingle release: Mark James’ “Raised On Rock” and Tony Joe White’s “I’ve Got A Thing About You Baby.” At Elvis’ behest, the latter, arguably the strongest track, was held back until 1974 for a future single.

Despite the setback, RCA’s sales objectives required an October album and this need took precedent over any musical coherence. With Colonel Tom Parker’s agreement, it scheduled an album called Raised On Rock/For Ol’ Times Sake and it mirrored the fate of its predecessor. Quickly assembled, it featured two songs previously issued as a single the previous month, five finished Stax cuts and three home recordings.

Elvis himself took the first steps to redemption of some sort. On December the 10th he returned to Stax and embarked on a seven-day recording spree that spawned 18 faultless performances; from the jubilant “Talk About The Good Times” to the introspective “It’s Midnight” and pure rock ’n’ roll of “Promised Land,” Elvis sang as if his life depended on it. Regrettably, Elvis’ renewed vigor was not matched by any innovative thinking by either his management or RCA. The repertoire was consequently split over two albums, Good Times in March 1974 and Promised Land in January 1975. Even during this period, RCA issued the album Elvis Recorded Live On Stage In Memphis in July 1974. To complete the overkill, Colonel Parker issued an Elvis talking-only album called Having Fun With Elvis On Stage on his own Boxcar label to sell directly at shows—and if that was not enough, RCA reissued it in September for retail. In spite of this muddled release schedule, it’s of great merit to Elvis that the December sessions spawned three top 20 singles and a #1 country album, Promised Land.

In defense of RCA, fiscally and commercially, it’s unlikely that any other record company would have done things differently. His management still pulled the creative strings and supplied the photo(s) that had to be returned after use. In this regard, even Elvis was somewhat complicit, as aside from the odd press photo call, no off-stage photographic session was ever officially scheduled for RCA in the‘70s.

Hindsight is a wonderful thing of course, but Elvis At Stax aims to put things right.

Legacy Recordings is proud to present its 40th anniversary celebration of the excellence Elvis strived for at Stax Studios. The dissipation of the Stax recordings across three albums over 18 months provided little or no creative kudos for such deserving artistic accomplishment. The objective of Elvis At Stax is to reflect the true spontaneity and musicianship of Elvis’ sessions on McLemore Avenue. Featuring many outtakes, remixes and studio banter, it captures the very essence of Elvis the musician at work. Packaged lavishly with insightful sleeve notes, historic artifacts and rare photographs, it provides a testament to the unequaled career of Elvis Presley.