Burnin' is a reggae album by The Wailers, released in 1973. The sixth album by Bob Marley, Peter Tosh and Bunny Wailer (the last before Tosh and Bunny departed for solo careers and the band became known as Bob Marley and the Wailers), Burnin' opens with a signature song, the call to action "Get Up, Stand Up" and includes a more confrontational and militant tone than previous records, such as in another Marley standard turned into a number one hit by Eric Clapton, "I Shot the Sheriff". The songs "Duppy Conqueror", "Small Axe", "Put It On" and "Pass It On" are re-recordings of songs previously released. 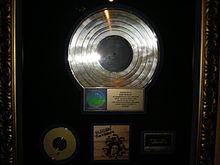 Burnin' peaked at number 151 and number 41 on the Billboard 200 and Black Albums charts respectively. In 2003, the album was ranked number 319 on Rolling Stone magazine's list of the 500 greatest albums of all time.[3] American singer Lauryn Hill's album cover for her debut The Miseducation of Lauryn Hill was inspired by the album cover of Burnin'. In 2007 the album was added to the Library of Congress' National Recording Registry for its historical and cultural significance.[4]