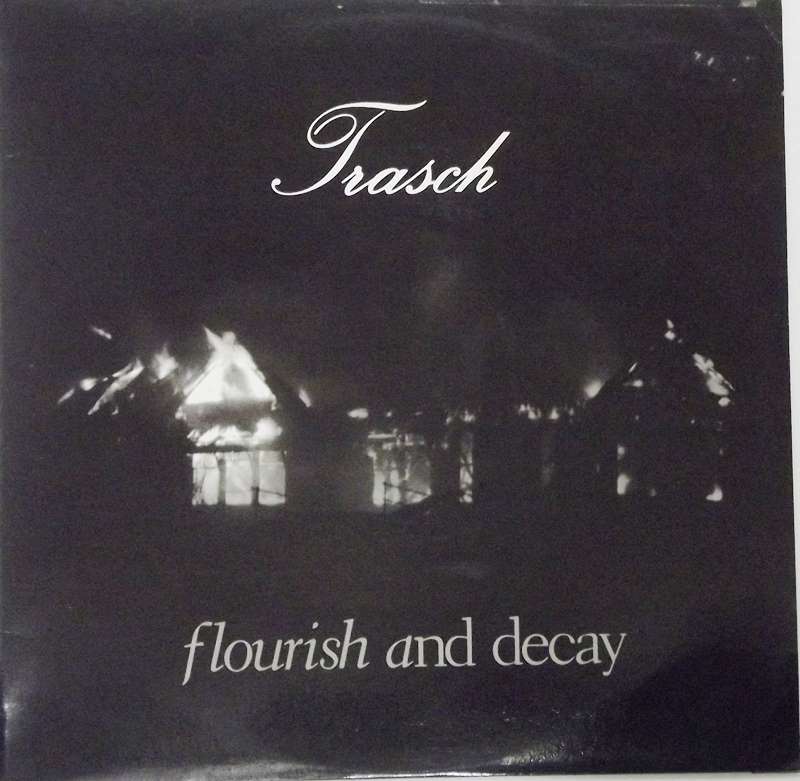 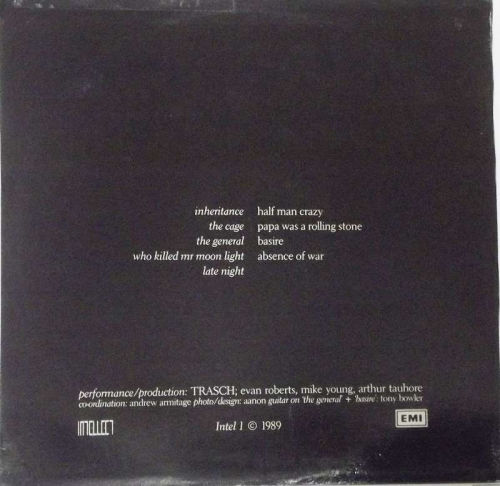 Wellington trio Trasch were local electronic music pioneers, built around the synth and programming skills of two moonlighting Radio NZ audio engineers, Evan Roberts and Mike Young. Vocals were provided by Arthur Tauhore, formerly of Wellington band Bump'n Ugly and also known to Roberts and Young, as the man who cut their hair.

The "Trasch Production Company" letterhead identified the team as "Myke & Evin & Artha". Their music found its way to an audience via friend and manager Andrew Armitage, who released their November 24, 1989 debut album Flourish and Decay on his indie label Intellect Records (via EMI), from an Aro Street address.

Eyes opened very wide when Arthur turned away from the audience, revealing that his leather pants were incomplete.

Early 1992 Mike Young moved to Auckland to work for radio station 89X. The single 'The Reason Rhyme' achieved the No.5 position on 95bFM's "Alternative Top Ten" on April 15, 1992 after seven weeks on the listener-voted chart, just as their debut CD album Chemikaze was released by Wildside. The single 'Reason Rhyme' was also released in Australia on Wildside, via Festival Records on March 16, 1992.

In an unusual move, Trasch's Auckland appearance was with rock bands Rumblefish, Second Child and 7 Dials at Ponsonby's Gluepot on Friday March 20, 1992. Trasch's performance that night won over the Gluepot crowd but eyes opened very wide when Arthur turned away from the audience, revealing that his leather pants were incomplete.

"Arthur will dress outrageously to give people something to look at and we just put a lot of energy into it," Mike Young told RipItUp (April 1992). "I think people are surprised by how much energy a keyboard band can have."

When Trasch played Wellington's Paisley Park, they called the venue to say they'd be an hour late as they'd been in an accident. "They announced it over the PA and everybody said, 'oh no'," said Young. "We'd been with a friend of ours who does latex makeup for films and we turned up with open cuts and gashes all over our faces and Arthur's bald head had a bit of brain poking out."

Young reflected on their recording process: "We'd sample a whole riff rather than a sound and then fuck around with it so it sounded completely different. On Chemikaze we didn't want to be machine music so everything's played manually – so some things go out of time."

"The vocals, Evan's and Arthur's turned out quite masculine, quite butch," said Young. "That's probably because of the way we record them, do heaps of processing, squash the sound up so it's really condensed and then do about 10 tracks singing the same thing, so it sounds like an army of people. Front 242 are like that – you can imagine an army of people singing."

In 1995 Evan Roberts remixed two Shihad tracks that appeared as bonus tracks on the CD single 'Gimme Gimme'. They were ‘Silvercup’ (remix) and ‘Clapperloader’ (remix).

Trasch ceased to function when vocalist Arthur Tauhore became unwell. He died in November 1994 of an Aids-related illness.