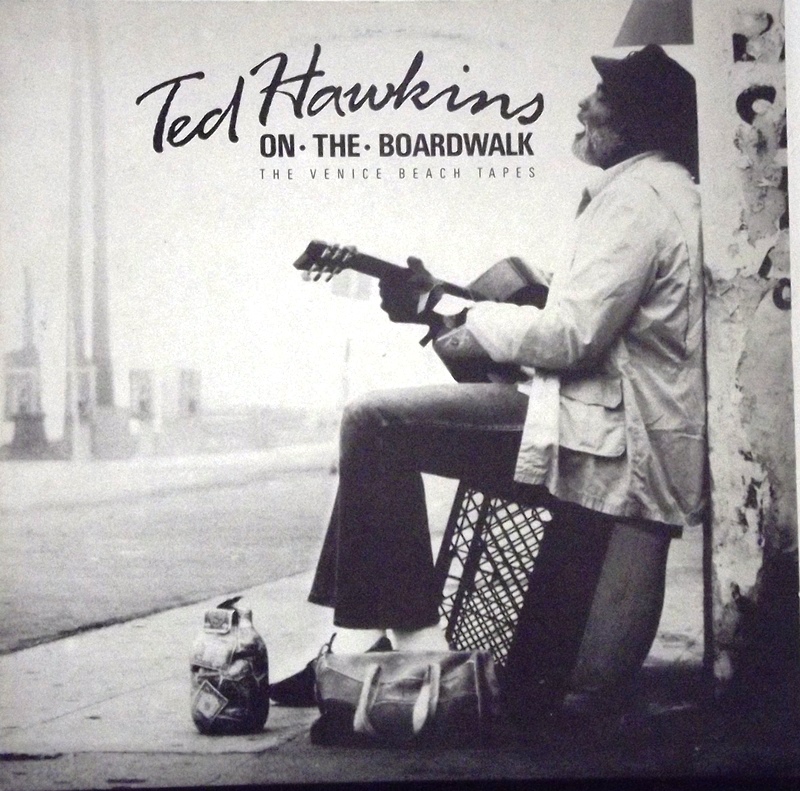 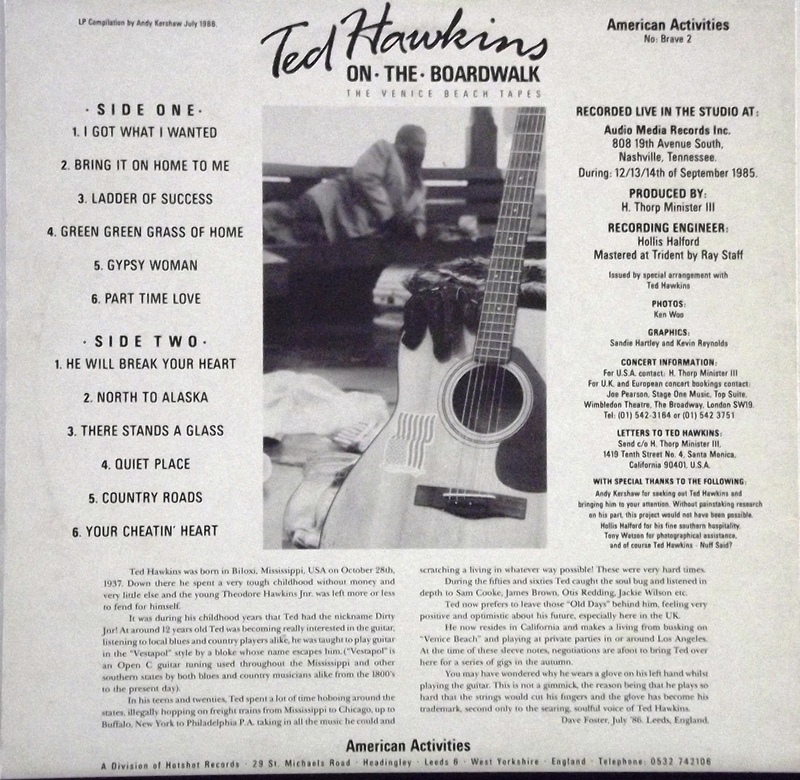 On The Boardwalk (The Venice Beach Tapes)

He was an enigmatic figure for most of his career. He split his time between his adopted hometown of Venice Beach, California, where he was a mostly anonymous street performer, and Europe and Australia, where he and his songs were better known and well received in clubs and small concert halls.

Hawkins was born into a poor family in Mississippi. His early life was difficult. He was sent to a reform school by the time he was 12 years old. and drifting, hitching, and stealing his way across the country for the next dozen years, earning several stays in prison including a three-year stint for stealing a leather jacket as a teenager. Along the way, he picked up a love of music and a talent for the guitar. "I was sent to a school for bad boys called Oakley Training School in 1949", he wrote in a brief piece of autobiography. "There I developed my voice by singing with a group that the superintendent's wife had got together". After reform school, he ended up in the state penitentiary and was released at 19. "Then I heard a singer whose name was Sam Cooke. His voice did something to me." For the next ten years or so he drifted in and out of trouble around the country, living in Chicago, Buffalo, Philadelphia, and Newark. In the middle of the mid-1960s folk music boom Hawkins set out for California to try for a professional singing career. He recorded several tunes without commercial success, worked at odd jobs, and took up busking along the piers and storefronts of Venice Beach as a way to supplement his income. Hawkins made ends meet by developing a small following of locals and tourists who would come to hear this southern black man, sitting on an overturned milk crate, play blues and folk standards and a few original songs in his signature open guitar tuning and raspy vocal style. Hawkins claimed the rasp in his voice came from the damage done by years of singing in the sand and spray of the boardwalk.

A series of record producers and promoters would "discover" Hawkins over the years, only to be thwarted by circumstance and Hawkins's unconventional life. The first of these was the musicologist and blues producer Bruce Bromberg, who approached Hawkins about a recording contract in the early 1970s. Hawkins tentatively agreed and recorded some dozen songs for Bromberg, but again he got in legal trouble and spent much of the next decade in prison and addicted to heroin. Bromberg lost contact until 1982, when he re-located Hawkins and got him to agree to release the previously recorded songs as an album, Watch Your Step, which was released by Rounder Records. This debut album was a commercial failure but received rave reviews (notably a rare five-star rating in Rolling Stone). Following the release of the album, Hawkins dropped out of sight again for a time, reuniting with Bromberg in 1985 for a second album, Happy Hour. This album featured more original songs by Hawkins and was again ignored in the U.S.; however it won acclaim and sales in Europe. Andy Kershaw encouraged Hawkins to come to the United Kingdom, and he moved to Bridlington in 1986 and enjoyed his first taste of musical success, touring Europe and Asia. In 1990, he was deported back to the United States, under "unpalatable" circumstances, by the British Government.[2]

During this period Hawkins mostly stayed out of trouble and refined his musical style, a mixture of folk music, country music, Deep South spirituals, and soul music. His style was informed by but did not resemble blues music (Hawkins claimed he could not play the blues because with his damaged fretting hand—he wore a leather glove to protect his fingers—he was unable to bend notes).

In 1987, the documentary filmmaker Nick Shaw approached Hawkins about producing a profile of his life and times, for which he followed Hawkins closely for the next two years. The documentary was eventually taken up by the Arts Council of Great Britain, but it has not been released. Some of the footage was included in the film Amazing Grace, produced by David Geffen.

Despite the recognition and fame he received in Europe, Hawkins was restless and moved back to California in the early 1990s and again took on the role of a street performer. Several musicians and promoters encouraged Hawkins to record, but he did so only on occasion and without much enthusiasm, until he agreed to record a full album for Geffen Records and producer Tony Berg. For this first major-label release, The Next Hundred Years, Berg added session musicians to Hawkins's typical solo guitar-and-vocal arrangements for the first time, and brought national attention and respectable sales to Hawkins (though Hawkins, in typically contrary fashion, claimed to dislike the result, preferring his unaccompanied versions). Hawkins began to tour on the basis of this success, commenting that he had finally reached an age where he was glad to be able to sing indoors, out of the weather, and for an appreciative crowd. He died of a stroke at the age of 58, just a few months after the release of his breakthrough recording.