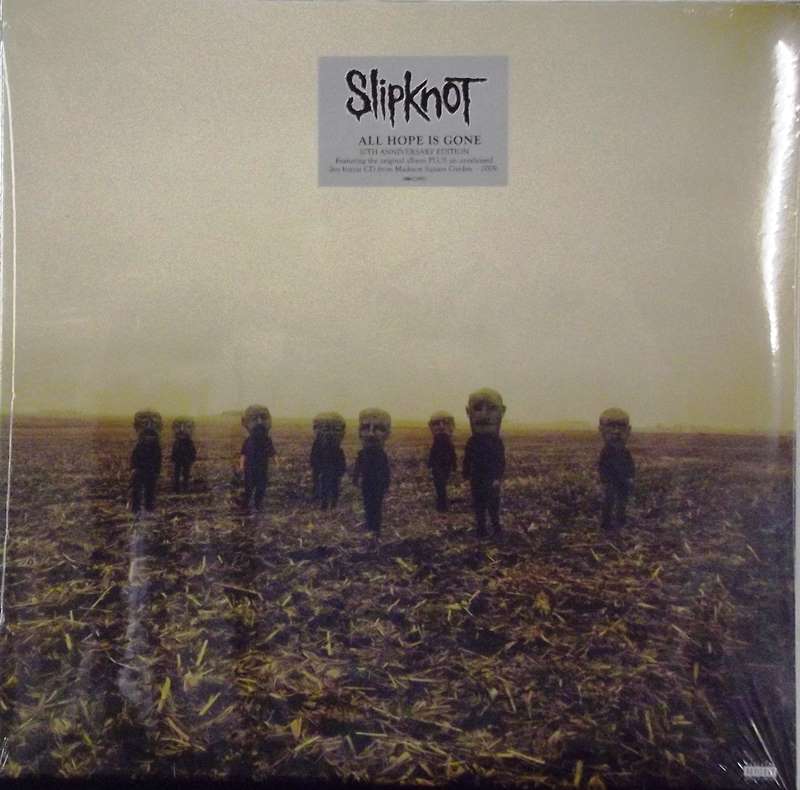 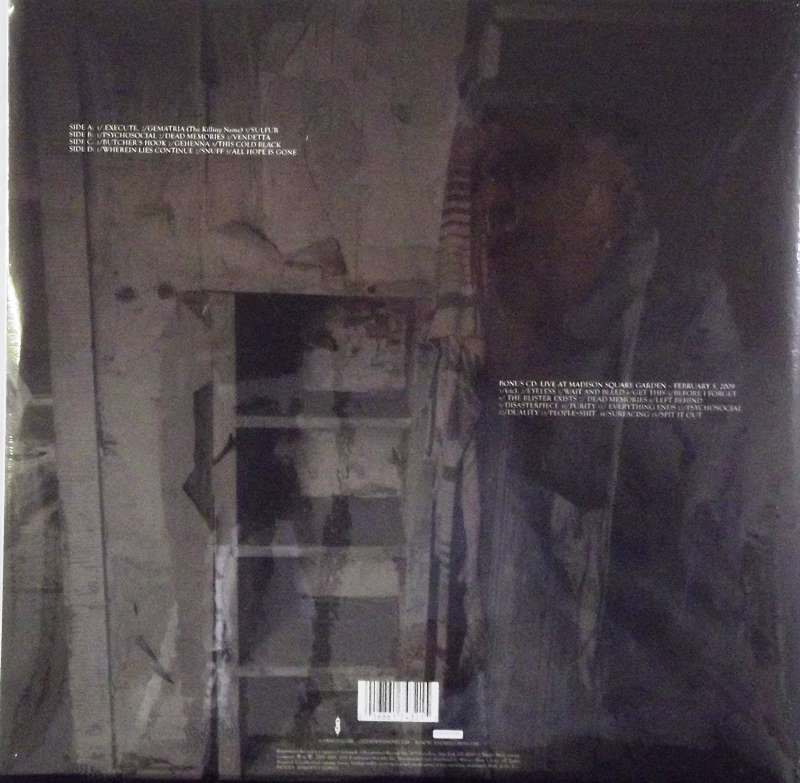 Two different sounds finally merge, just in time for the band to start dissolving. And yet, taken at its best moments (of which there are several), All Hope is Gone shines just as brightly as the band's best works.

The 10th anniversary re-release of All Hope is Gone is strikingly deficient of extra content, especially given Slipknot’s penchant for giving fans a wealth of new rarities and goodies with prior reissues. For comparison’s sake, Iowa’s re-release saw the 9-piece provide an entire film of music videos and interviews, new artwork, and live audio of the Disasterpieces DVD. Meanwhile, the reissue of All Hope is Gone simply features new cover art (which is quite pisspoor compared to the original cover) and a live disc featuring the band performing at Madison Square Garden. That’s pretty paltry, but I suppose it’s not entirely surprising when taking the band’s views on the record into consideration.
After all, they themselves (minus a few members) often consider All Hope is Gone to be the most disappointing record in their short discography. Guitarist Jim Root once stated that “it felt a little rushed” and went further to blast producer Dave Fortman by saying he “wasn't able to get nine people together on the same page and, to me, that's the most important thing in making a Slipknot record." And if there’s anything I can at least agree with the album’s detractors on, it’s Root’s comment about not being able to stay on the same page. Yes, All Hope is Gone is very obviously a stitch job. Many disparate flavors are blended together without much forethought into what the outcome would be. Many elements of Stone Sour, in particular, creep almost uncomfortably into Slipknot’s sound to offset some of the outfit’s heaviest moments.
And yet, that last statement is often more of a strength than a weakness to my ears. I understand that many people found the album sorely lacking in the anger and brutality of previous records (which amuses me, considering how soft Vol. 3 was on many occasions), but it’s not like the band’s unique brand of groove-inflected alt metal has dulled all that much here. “Gematria,” “Sulfur,” “Wherein the Lies Continue,” “This Cold Black,” and the title track are all imbued with the same manic energy and intensity that Slipknot built their empire on, and they should prove to be highlights to fans who flocked to their most furious and hard-edged moments. Some of the moments where the Stone Sour influences rear their head also prove to be highlights, such as the way “Sulfur” combines a thrash-like fury in the verses with a fusion of catharsis and clarity in the groove metal chorus. “Gehenna” is another strong point, using the softer elements to throw the listener into a host of creepy guitar and sampling effects while Corey Taylor delivers one of his most effective performances yet.
Speaking of Corey, All Hope is Gone may actually be the strongest showing of the man’s versatility on the mic. Growling, screaming, gentle crooning, mid-range singing (with a bit of rasp for good measure), creepy low vocals that almost pass for spoken word, and forceful gang shouts are all given a chance and are more equally distributed on this album than on any other by the group. Even for non-fans of the band, one has to admit that there’s a lot of power and charisma whenever he takes centerstage. However, true to this album’s spirit of inclusion, most of the other members step it up quite a bit too. Guitar-wise, expect to hear a lot more shredding and traditional death/thrash-influenced riffs than on previous outings; the solos in particular prove to be some of the best bits on the songs that include them, like “Psychosocial,” “Butcher’s Hook,” and “Gematria.” Joey Jordison, meanwhile, remains a powerhouse on the drums and does a nice job of combining brutality and force with a strong ear for tasteful and varied dynamics. The only real disappointment here is that some of the more extraneous members, such as keyboardist/sampler Craig Jones and DJ Sid Wilson, have a lot more time on the sidelines because of the band’s shift toward a more traditional metal sound.
Truth be told, I find the weakest moments to be found in the softest moments. “Snuff,” while very nostalgic to return to, simply doesn’t hold up well anymore (hell, one could argue it didn’t hold up very well in the first place). It’s an overly saccharine piece of melancholic alt-rock fluff that doesn’t really fit too well in the band’s discography as a whole. Perhaps if it was one of the ballads on a Stone Sour record - in the same vein as “Bother” - it would have found a better home. The same could be said of “Dead Memories” to an extent; despite some decent lead guitar work from Mick Thompson, the heartbroken lyrics (Corey was going through a divorce at the time) prove to be too melodramatic and are quite hard to take seriously. Also, some of the pacing is a bit startling; did anyone really expect the title track to appear right after “Snuff,” for instance"
All Hope is Gone is a strange record. It’s a mishmashed, disjointed metal album with a severe identity crisis. Joey Jordison once stated that it’s the sound of the band breaking at the seams, and that’s probably the best way to explain the lack of control and cohesion regarding the project. Still, I can’t deny that I found some of the band’s best material to be present here. The heaviest moments remain a force to be reckoned with - just as on past Slipknot records - and the moments that integrate the mix of heavy and soft dynamics are often quite effective too (with a few exceptions; the chorus to “Butcher’s Hook” is absolutely miserable).