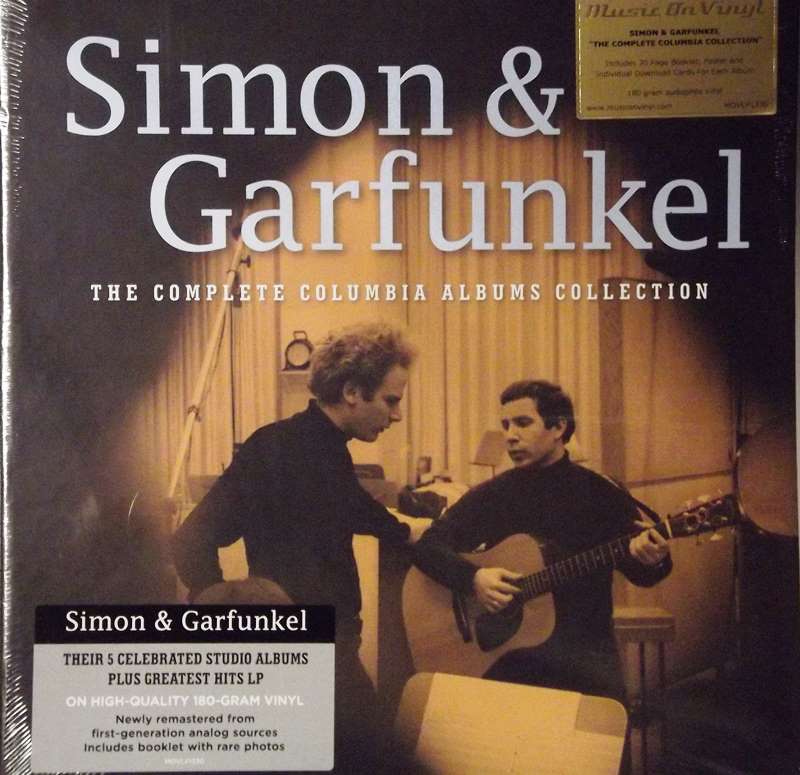 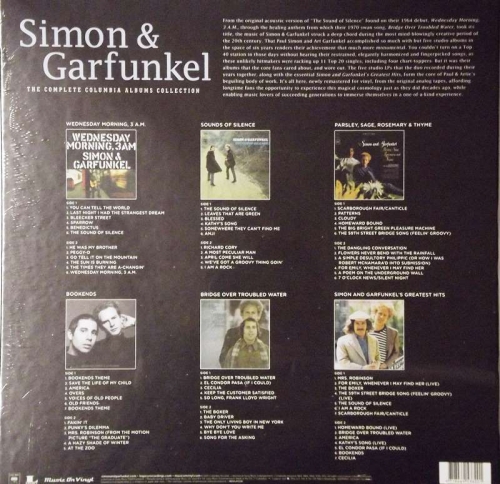 Simon & Garfunkel's distinctive harmonic sound, Paul Simon's probing lyrical sensibilities for coming-of-age generations, and the duo's culturally transformative music are all presented in spades on the The Complete Columbia Albums Collection. This seminal and comprehensive box set comprises the duo's five studio masterpieces (first released between 1964 and 1970) newly remastered from first-generation analog sources. Wednesday Morning, 3 A.M. (1964), Sounds Of Silence (1966), Parsley, Sage Rosemary and Thyme (1966), Bookends (1968), Bridge Over Troubled Water (1970), and Greatest Hits (1972) are all included. Each box is individually numbered to a limited issue of 1000 copies and contains a 20-page booklet, poster, and album download codes.

As Simon's songwriting developed along provocative and topical lines, the pair recorded Wednesday Morning, 3 A.M., their first album as "Simon & Garfunkel" and first for Columbia Records, in 1964. While it initially only reached a small audience, "The Sound of Silence" - a haunting acoustic song illuminated by the signature solo and harmony vocal blends S&G invented and perfected - had been overdubbed with electric instruments and released to radio, unbeknownst to either Simon or Garfunkel. The electrified version became a massive hit, and one of the archetypal anthems of an emerging folk-rock movement.

Wednesday Morning, 3 A.M. was re-released in January 1966, alongside Simon & Garfunkel's second studio album, Sounds of Silence, which includes the electric hit single version of the song. "The Sound of Silence" launched a long unbroken chain of hits and album successes. "I Am a Rock," a song that first appeared on The Paul Simon Songbook, became an enormous smash in its Simon & Garfunkel incarnation.

Parsley, Sage, Rosemary and Thyme, S&G's third studio album, generated five singles. One, "Mrs. Robinson," another anthemic Simon composition, became the centerpiece for the soundtrack to The Graduate, the iconic generational film directed by Mike Nichols. "Mrs. Robinson" is also included on Simon & Garfunkel's fourth studio album, Bookends, which hit #1 in the US and the UK, becoming the pair's first #1 album.

Simon & Garfunkel upped the ante again with their last full studio album, Bridge Over Troubled Water, which hit #1 all over the world following its release in January 1970. Its title track ranks with the most beautiful songs ever written, made unforgettable through one of the most emotionally uplifting vocal performances recorded. The album has sold more than 25 million copies worldwide.