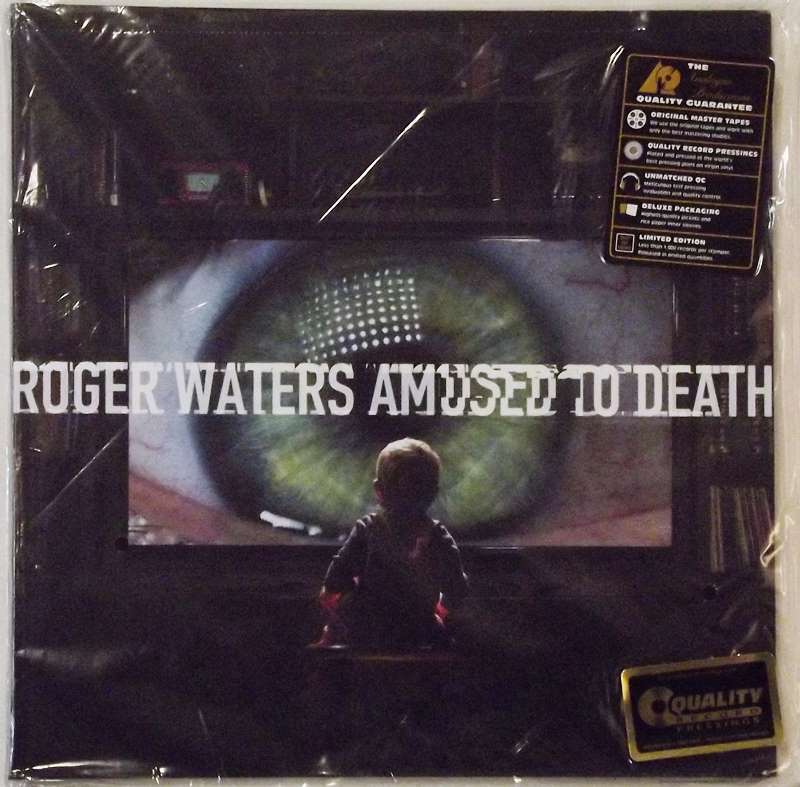 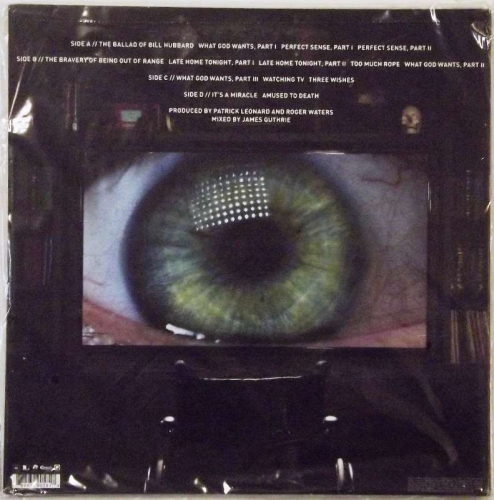 Amused to Death is a concept album, and the third studio album by former Pink Floyd bassist/vocalist Roger Waters. It was released in 1992. A remastered remix for which Waters worked with James Guthrie was released in 2015.

Roger Waters started working on Amused to Death in 1987 when he first wrote "Perfect Sense".[2] It was several years before the album was released and it is unknown how much the material was changed in the interim. The album's artwork features a monkey watching television in reference to Stanley Kubrick's 2001: A Space Odyssey.[3] The image on the TV is a gigantic eyeball staring at the viewer.[3] According to Waters, the monkey was "a symbol for anyone who's been sitting with his mouth open in front of the network and cable news for the last 10 years."[2] The album's title was inspired by Neil Postman's book Amusing Ourselves to Death.[3] The album is organised loosely around the idea of a monkey randomly switching channels on a television,[4] but explores numerous political and social themes, including critiques of the First Gulf War in "The Bravery of Being Out of Range" and "Perfect Sense".

The first song, "The Ballad of Bill Hubbard", features a sample of World War I veteran Alfred "Raz" Razzell, a member of the Royal Fusiliers (much like Waters' father Eric Fletcher Waters had been in World War II) who describes his account of finding fellow soldier William "Bill" Hubbard, to whom the album is dedicated, severely wounded on the battlefield. After failed attempts to take him to safety, Razzell is forced to abandon him in no-man's land. This sample is continued at the end of the title track, at the very end of the album, providing a more upbeat coda to the tragic story. The track also features the sound of several animals.[4] The second song, "What God Wants, Part I", follows and contrasts the moving words of Razzell by opening with the TV being tuned instead into an excerpt that sounds like it's taken from a vox pop of a child who says, "I don't mind about the war. That's one of the things I like to watch – if it's a war going on. 'Cos then I know if, um, our side's winning, if our side's losing..." he is then interrupted by the channel change and a burst of ape-chatter.

"Perfect Sense" is a two-part song about a world where live transmissions of wars are the main form of entertainment.[2] The first part of the song begins with a loud, unintelligible rant, and then a backwards message voiced by Waters: "Julia, however, in the light and visions of the issues of Stanley, we changed our minds. We have decided to include a backward message. Stanley, for you, and for all the other book burners." The message climaxes with Waters yelling in the aggressive Scottish voice he used to depict the character of the teacher in The Wall. In the second part, famed sportscaster Marv Albert narrates a war as if it were a basketball game.

"The Bravery of Being Out of Range" includes a reference to a song written by Waters on Pink Floyd's 1977 album Animals, "Sheep" (not to mention the spiritual "Swing Low, Sweet Chariot"[5]). In "Sheep", Waters sings "I've looked over Jordan and I have seen..." Waters references and expands on this line in "The Bravery of Being Out of Range" when he sings "I looked over Jordan and what did I see/Saw a U.S. Marine in a pile of debris". "Late Home Tonight, Part I" recalls the 1986 US air strike against Libya from the perspective of two "ordinary wives" and a young American F-111 pilot. At the beginning of "What God Wants, Part II", Charles Fleischer (better known as the voice of Roger Rabbit) performs the greedy evangelist's sermon. The song "Watching TV" (a duet with Don Henley) explores the influence of mass media on the Chinese protests for democracy in Tiananmen Square. Waters makes reference to Andrew Lloyd Webber in the song "It's a Miracle":