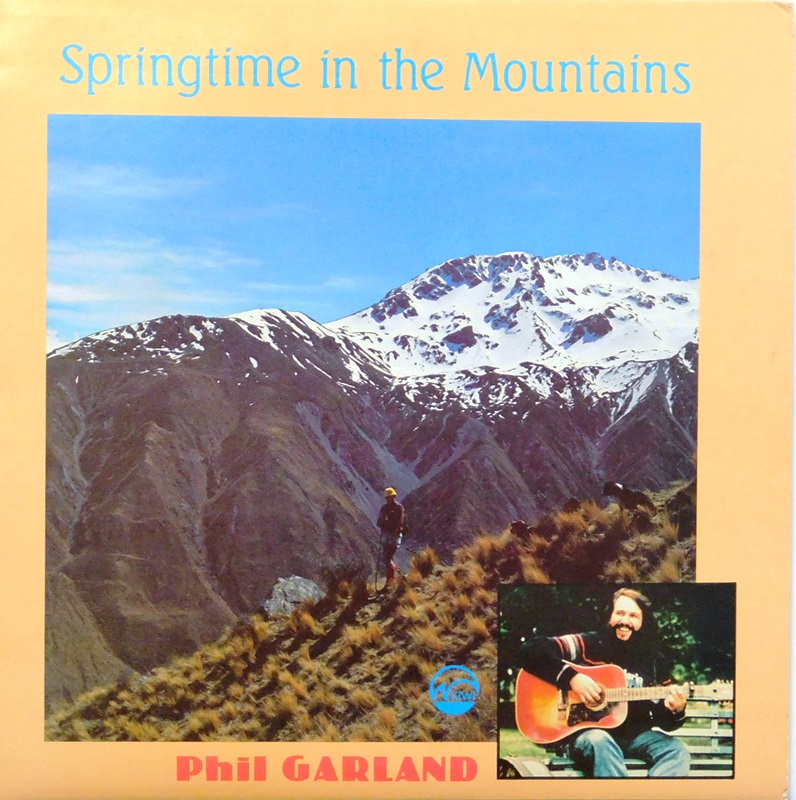 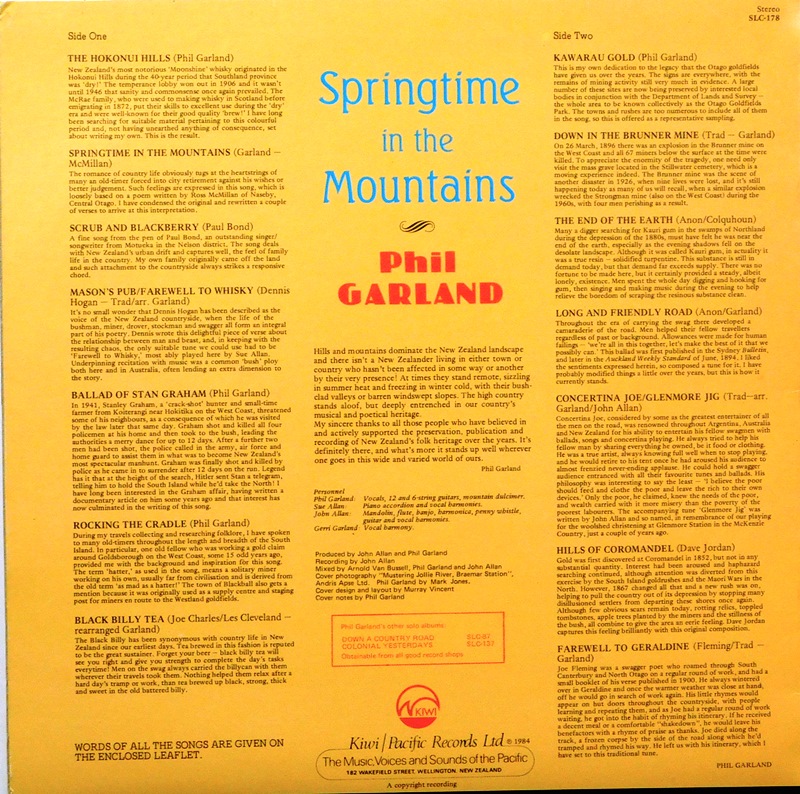 Springtime In The Mountains

When Phil Garland – often hailed as the godfather of New Zealand folk music – died on 15 March 2017, you could almost hear the angels saying, “Move over, everyone, make way for the big man and his Gibson Hummingbird 12-string. Give him a really big hand – he deserves it.”

Garland was a kingpin in the home grown folk music scene for half a century, as singer-songwriter and as folklorist and collector of precious heritage material: poetry, songs, stories and yarns from our colonial past. He was acknowledged as the foremost authority on local folkloric heritage, and it is testament to his musical ability, his broad-based knowledge, his perseverance, and commanding stage presence that he was able earn a lifelong living in this musical field that is arguably as fringe to mainstream music as poetry is to populist literature.

Over 50 years, Garland recorded 19 albums of New Zealand balladry that told stories of the “folk” of this land from the early European-settler days; of the pleasures and difficulties of our wild geography and the people and events that continue to shape this nation.

The arts, in all their multifarious forms, hold a mirror up to society. Pictures and stories, plays and drama, myth and allegory, poetry and song: all of these reveal different aspects of a people. They reflect who we are, how our culture operates, and how what we do affects others.

Alongside the storytellers, authors and historians, Garland sang to us and about us.

Alongside the storytellers, authors and historians, Garland sang to us and about us in tunes and verse; one man with resonant voice and 12 deftly plucked guitar strings. He sang of the Dalmatian gum diggers of Northland, the coal miners of the West Coast and the gold-miners of Central; of the swaggers and scoundrels, the pioneers and moonshiners; of the snow-crested high-country peaks, Canterbury nor’westers and the wind in the tussock; of the hardship of panning for gold in snowy Tuapeka, the notorious Rising Sun Hotel in Cathedral Square, and of the young New Zealanders who died fighting wars on foreign soil.

Garland liked to tell stories and sing songs about interesting things in the days of old that have long since disappeared. His song of Christchurch, ‘Age of Grace’, is a wordscape of the innocent, pre-quake days of his own youth and childhood when characters like the Milko, the Dandy, Ice-Cream Charlie, the Rag’n’Bone man and the Bottle-o were regulars around town. And in the ongoing folk tradition, if he didn’t have his own words he would set poems he had collected to music, or adapt and arrange what went before, for example, replacing Australian allusions, descriptions and place names for those from New Zealand.

The nature of the musical gift is that it taps you on the shoulder and won’t let go. It picked Garland when he was a child and gave him a good ear for a tune. Later he made the finals of a school talent quest and when the bug really bit, aged 16, with Bill Haley and The Comets revving up the radio waves, he sold his stamp collection and bought his first guitar.

Back then, American crooners with slicked-back teddy boy quiffs were rocking around the clock or singing their baby back home, and British skiffle artist Lonnie Donegan was plying a jumpy line between trad jazz and the rhythmic, driving folk of such imposing forerunners as Lead Belly.

Garland was in several prominent Christchurch groups in the early 1960s, including his former school band Phil Garland and the Fortunes, the Saints, the Dynamics, and the Playboys, which he founded with stylish girl singer, his then-girlfriend Diane Jacobs (aka Dinah Lee).

Of those days, he later wrote: “Diane and I became a couple and supported each other’s musical ideas. Dad used to transport us to and from performances, never uttering a word against what I was doing.”

Before going their own ways, Garland and Jacobs headed to Auckland in 1962 to try their luck in showbiz. While there, Garland recorded the song ‘Little Band of Gold’ for Viking Records, whose A&R man Ron Dalton had heard him singing with the Playboys at the Top 20 Niteclub in Durham Lane. The song topped the Coca-Cola Hit Parade.

By the mid-60s, popular music was at the crossroads. Electric rock and pop were heading in one direction and the acoustic folk scene had taken off in another with its own myriad styles, from centuries-old minstrel tunes and ethnic folksong to original narrative ballads, field hollers, and colonial bush songs.

The 200,000-strong March on Washington DC in 1963 for jobs and freedom attracted worldwide attention to civil rights for the oppressed and gave voice to the plangent African-based gospel and other powerful protest songs rooted in the black vocal tradition. The anti-Vietnam War and anti-nuclear movements spawned their own protest songs sung by scruffy individuals, earnest wailers, or pristine college vocal groups; all of these sounds were fresh and appealing against be-my-baby pop, with their messages going out loud and clear through 45s, top-20 lists and the international reach of television.

By 1964, Garland developed a strong interest in folk music and it soon became his abiding passion and totally absorbing lifestyle. The following year he travelled to Britain and Europe with the few New Zealand songs he knew, and while there heard the whole gamut of folk styles. This experience encouraged him to further his knowledge of New Zealand’s heritage, and he became convinced of two things: his hometown Christchurch needed its own folk music club, and he needed to travel around the country to collect as much rich historic material as he could before it was lost forever.

In 1967 he formed the Christchurch Folk Club (incorporated as the Banks Peninsula Folk Club) and set up its first venue as the Christchurch Folk Centre. By then there were various coffee bars around town that were happy to have musos on stools in the corner, but it was the rich interchange between the University of Canterbury Folk Music Club, with its strong membership and regular concerts, and Garland’s Folk Centre that resulted in them becoming the default venues for folk music in Christchurch.

For the next eight years, while Garland and then-wife Libby hosted, the Folk Centre in its various locations would be chocka on opening nights, especially weekends. Local performers would share the bill with guest artists from Australia, Britain, the US and Canada, and the backroom resonated with musical banter in many different accents and the tuning twangs of guitars, banjos, violins, mandolins, dulcimers and so on.