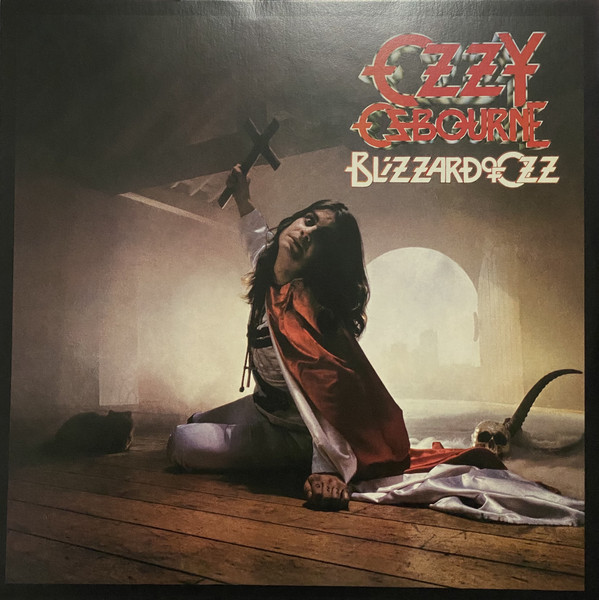 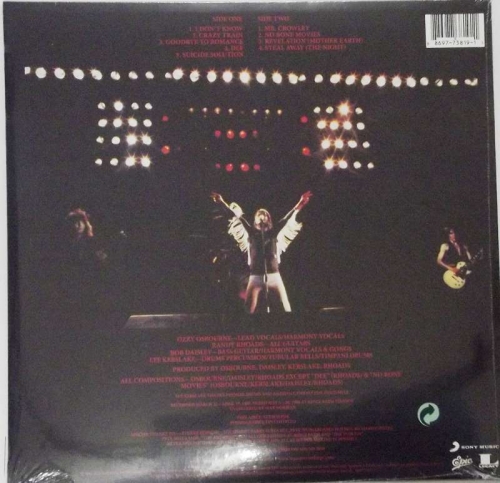 Sealed brand new remastered 180 gram repressing of this classic album with Silver With Red Swirls vinyl . Made in the EU.

Blizzard of Ozz is the debut solo album by British heavy metal vocalist Ozzy Osbourne, released on 12 September 1980 in the UK and on 27 March 1981 in the US. The album was Osbourne's first release following his 1979 firing from Black Sabbath.[8] Blizzard of Ozz is the first of two studio albums Osbourne recorded with guitarist Randy Rhoads prior to Rhoads' death in 1982.[9]

Much of the album was written by guitarist Randy Rhoads, bassist Bob Daisley, and Ozzy Osbourne in a live-in rehearsal facility in Monmouth, Wales,[10] with a friend of Osbourne's named Barry Screnage performing as the group's drummer.[10] Screnage was never considered as a candidate to be the group's permanent drummer and he was not involved in the songwriting process at all.[10] The band recorded demos of the songs "I Don't Know", "Crazy Train", "Goodbye to Romance", and "You Looking at Me Looking at You" in Birmingham in early 1980 with ex-Lone Star drummer Dixie Lee. The band had hoped Lee would be a permanent member but "he wasn't the final piece of the puzzle", bassist Daisley recalls.[10] After auditioning several drummers, ex-Uriah Heep member Lee Kerslake was hired as the band's permanent drummer, and the completed lineup retreated to Clearwell Castle in Gloucestershire for six days to rehearse and give Kerslake an opportunity to learn the new songs.[10] A week later, they traveled to Ridge Farm Studio to commence recording.

The first track written for the album was "Goodbye to Romance". Osbourne has stated that the song was his way of saying goodbye to his former band Black Sabbath, as he had thought his career was over after leaving the band.[11] After performing a show in Birmingham, the band hastily returned to Ridge Farm to remix "Goodbye to Romance" for a single. The next morning they were informed that their label Jet Records instead wanted a brand new song to release as a single.[10] Rhoads, Daisley, and Kerslake quickly put together the song "You Said It All", with drummer Kerslake performing the guide vocal at soundcheck while a drunken Osbourne slept under the drum riser.[10] The song was ultimately never recorded, though a live version was released on Ozzy Osbourne Live EP in 1980. The final track written was "No Bone Movies", which was originally intended to be used only as a B-side but was added to the album in order to give Kerslake a writing credit, as all the other material had been written before he joined the band.[12] Keyboardist Don Airey claims that parts of "Revelation (Mother Earth)" as well as the intro to "Mr. Crowley" were written by him in the studio, though he never received writing credit for these contributions.[13]

Chris Tsangarides was originally hired to produce the album, with Max Norman to serve as studio engineer. Osbourne and the band were very unhappy with Tsangarides' production and he was fired and replaced by Norman, who stepped in to complete producing and engineering.[14] Norman's production work on Blizzard of Ozz is uncredited, though he did go on to produce all of Osbourne's albums prior to 1986's The Ultimate Sin.[15]

At the time of the album's recording, the band itself was billed as 'The Blizzard of Ozz',[10] and the album was intended to be credited to the band with Osbourne's name in smaller print. In fact, when the band appeared at the Reading Festival in 1980 they were billed simply as "Ossie Osborne's New Band".[16] According to Daisley, "When the album was released the words 'Ozzy Osbourne' were in bigger print than 'The Blizzard of Ozz' which made it look like an Ozzy Osbourne album called The Blizzard of Ozz. Randy (Rhoads) was never one to rock the boat. He knew he was in a situation which was a good opportunity for him being relatively unknown, so when Lee (Kerslake) and I were ousted, Randy had no allies and the act became 'Ozzy Osbourne' and no longer a band."[17] Rhoads felt that he and Daisley were contributing the vast majority of the songwriting and arranging, and he had little interest in performing in a backing band for someone he felt wasn't contributing as much.[12] Drummer Kerslake has maintained that Rhoads almost left the band in late 1981, due to this displeasure. "He didn't want to go (on tour with Osbourne). We told him we were thrown out. He said he was going to leave the band as he did not want to leave us behind. I told him not to be stupid but thanks for the sentiment," the drummer later recalled.[18] Entertainment attorney Steven Machat, who was involved in the deal Osbourne signed with Jet Records, said in his 2011 book Gods, Gangsters and Honour: A Rock 'n' Roll Odyssey that Osbourne's soon-to-be manager and wife Sharon Arden was not happy with the level of creative input that Rhoads, Daisley, and Kerslake had in the Blizzard of Ozz album and did not want them to share the credit.[19] Album producer Max Norman concurs that Daisley and Kerslake made considerable songwriting contributions during their time in the band, while also noting that the Osbourne camp "might want to dispute that now."[14]

Though Sharon has said that the recording of Blizzard of Ozz was one of the best experiences of her life, she was actually in Los Angeles during recording and not yet involved with the band. Osbourne's then-wife Thelma was actually present at Ridge Farms Studios for much of the recording.[12]