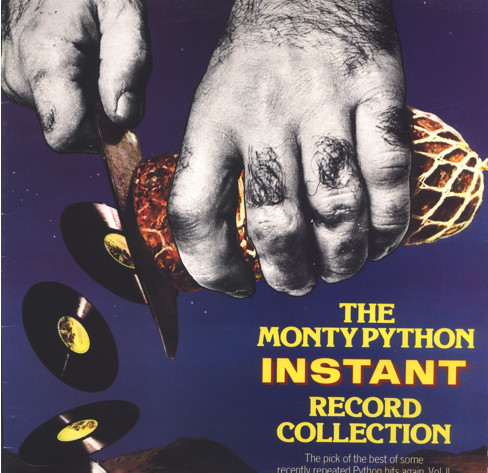 The Monty Python Instant Record Collection is the title of two compilation albums by the Monty Python troupe. The first was released in the UK in 1977 and drew from the group's first five Charisma albums, while the second was released in the US in 1981 and comprised tracks from their four albums released on the Arista label. Billed as "the pick of the best of some recently repeated Python hits again, Vol. II", the record sleeve was designed by Terry Gilliam. The UK version originally featured packaging that folded out into a cardboard box resembling a large stack of record albums (all containing spoofs of popular album names). An inner sleeve featured a spoof "Where Are They Now?" update on the members of the Python team.

As ever, the original vinyl release of the UK version had messages from George Peckham on the runout grooves. The first side read: "DEAR MUM, CUTTING ANOTHER PYTHON RECORD. I'LL BE HOME LATE TONIGHT, LUV PORKY", while the second side read: "SPECIAL RECORD NO. 471. RING CHARISMA FOR YOUR PRIZE NOW!".

The only new sketch (on the UK version) is "Summarise Proust Competition" which was originally performed on the television series Monty Python's Flying Circus and was re-recorded for Monty Python's Previous Record but never used, while the Alistair Cooke sketch is preceded by a brief, newly recorded introduction by Michael Palin. Many of the sketches are edited from their original versions.