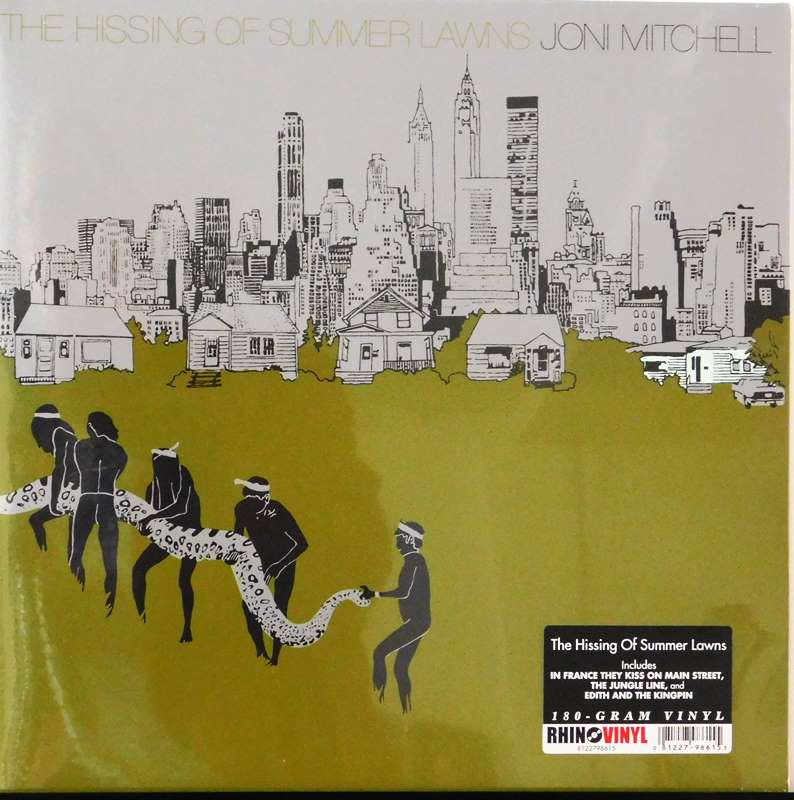 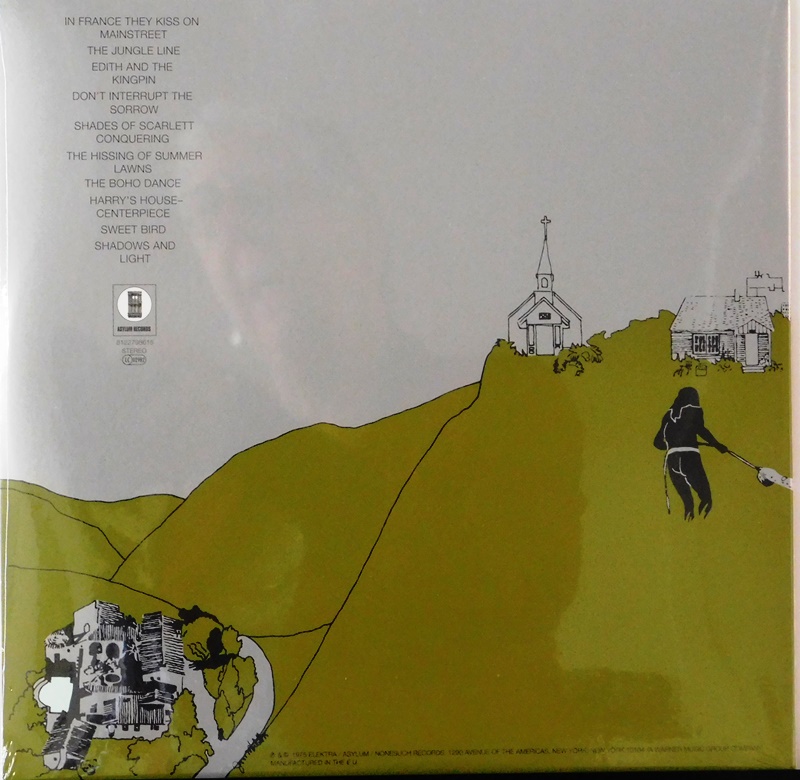 The Hissing Of Summer Lawns

The Hissing of Summer Lawns is the seventh studio album by the Canadian singer-songwriter Joni Mitchell, first released in 1975.

The first track, "In France They Kiss on Main Street", is a jazz-rock song about coming of age in a small town in the 1950s rock & roll era. (The song was released as the single from the album and reached number 66 on the Billboard charts.) "The Jungle Line" uses a field recording from Africa of the Drummers of Burundi (called 'warrior drums' in the credits), onto which are dubbed guitar, Moog synthesizer and the vocal line. The lyrics pay homage to the works of the French Post-Impressionist painter Henri Rousseau. Mitchell blends details of his works with imagery of modern city life, the music industry and the underground drug culture.

"Edith and the Kingpin" marks a return to jazz in a story of a gangster's new moll arriving in his home town. "Don't Interrupt the Sorrow" is an acoustic guitar–based song with stream-of-consciousness lyrics, focused on women standing up to male dominance and proclaiming their own existence as individuals. "Shades of Scarlett Conquering" is an orchestral-based piece about a modern southern belle basing her life and self-image on the stereotypes of the Scarlett O'Hara character from Gone with the Wind.

The second side begins with the title track, "The Hissing of Summer Lawns", which is about a woman who chooses to stay in a marriage where she is treated as part of her husband's portfolio. "The Boho Dance" comments on people who feel that artists betray their artistic integrity for commercial success, with an ironic glance at those who said this of Mitchell herself and parallels Tom Wolfe's The Painted Word.[9][6] "Harry's House/Centerpiece" concerns failing marriage as example of the loneliness of modern life and frames the jazz standard "Centerpiece" by Harry "Sweets" Edison and Jon Hendricks. "Sweet Bird" is a sparser acoustic track that is a slight return to Mitchell's so-called 'confessional' singer-songwriter style and addresses the loss of beauty power with ageing. Its lyrics indicate that it may also be a reference to Tennessee Williams's Sweet Bird of Youth.  The final track is "Shadows and Light", consisting of many overdubs of her voice and an ARP String Machine (credited as an ARP-Farfisa on the album sleeve).

The African theme of "The Jungle Line" also features on the album sleeve, with an image of dark-skinned people carrying a large snake (both were embossed on the original vinyl album cover). Both men and snake are superimposed on the Beverly Hills suburbs, with Mitchell's own house marked in blue (green for the UK issue) on the back cover.