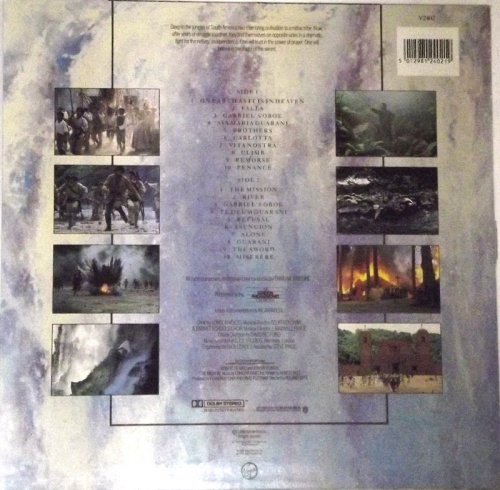 Very smart clean vinyl with a good cover with 2 cm split on spine.

The Mission is the soundtrack from the film of the same name (directed by Roland Joffé), composed, orchestrated, conducted and produced by Ennio Morricone. The work combines liturgical chorales, native drumming, and Spanish-influenced guitars, often in the same track, in an attempt to capture the varying cultures depicted in the film.[3] The main theme, "Falls", remains one of Morricone's most memorable pieces, and has been used in numerous commercials since its original release. The Italian song "Nella Fantasia" ("In My Fantasy") is based on the theme "Gabriel's Oboe" and has been recorded by multiple artists including, Sarah Brightman, Amici Forever, Il Divo, Russell Watson, Hayley Westenra, Jackie Evancho and Yasuto Tanaka.

The soundtrack was nominated for an Academy Award in 1986 and won the Golden Globe Award for Best Original Score and the BAFTA Award for Best Music. It was selected as the 23rd best film score in American Cinema in the American Film Institute's 100 Years of Film Scores.[4] The music was also used during the 2002 Winter Olympics in Salt Lake City, Utah.