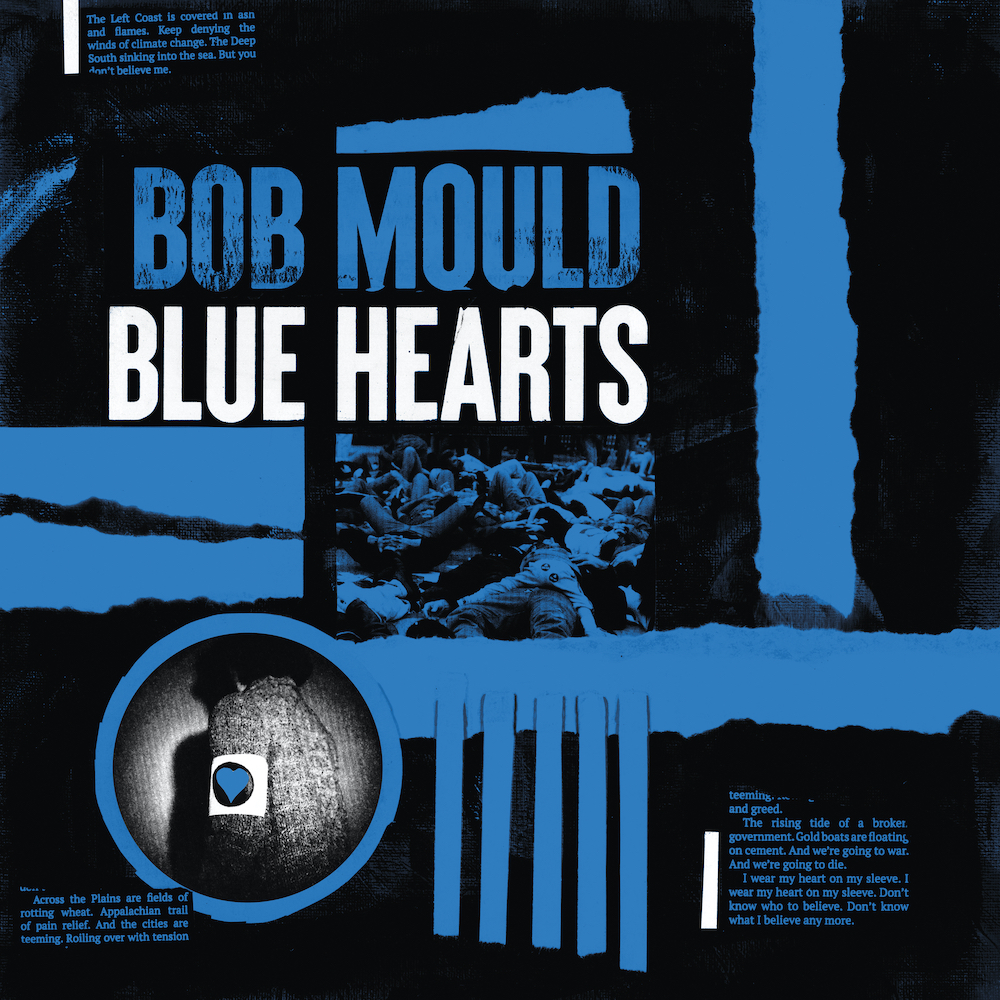 On stage before the curtains pull back, Bob Mould is strumming an acoustic guitar and lamenting. And we’re all going to war/ And we’re all gonna die/ I wear my heart on my sleeve. Far from it as the Blue Hearts album is revealed in all its fierce and raging glory. The spirit of Hüsker Dü in all but name.

With the Huskers, he was the first to take the baton from the Ramones and so they became the greatest Post-Punk guitar band. Alcohol and drugs to come to terms with. Confronting his homosexuality. He has continued to produce great music over the long haul, including a foray into electronica. The man is a passionate fan of pro-wrestling and there is no better glorious American trash culture than that. Except Rock’n’Roll.

After the wailing is done, Next Generation and American Crisis slams out of the speakers at you with the old familiar wall of noise guitars. Relentless pressure waves of sound rolling in like an ocean. Rock music played fast, colliding and merging together and flashing melodies before annihilating.

Wake up every day to see a nation in flames/ We click and we tweet/ and we spread these tales of blame.

This song I understand was written two years ago. The rest probably too. And like many artists this year the music may seem prescient but the events are older than most of us. If you consider Korea,the Cold War, missile crisis, Vietnam, Watergate, hostages in Iran, Nicaragua, two Iraqi wars, 9-11, Afghanistan, Al-Qaeda, ISIS. The United States as power is unsurpassed in human history. Global dominance is a new phenomenon on this scale.

Fireball continues the attack after some breathlessness as Crisis fades. Guitars coming in waves like carpet bombing. It is very American to blast your way to salvation.

Forecast of Rain is a rant against Church. Not religion but the hypocritical practitioners. The rain that is being referred to is the biblical forty days of floods. Therefore, a clever backhand to climate change.

When You Left Me and Siberian Butterfly. The attack shifts a bit and more melody is allowed to enter amongst the constant riffage. Personal relationships and sexual orientation addressed on the first. Some soothing rays of light on the second.

Everything to You and Racing to the End seethe and rage. Inside the seamless barrage the sound actually becomes a little ponderous and reflective. A guitar solo miraculously flashes like a searchlight.

Baby Needs a Cookie does actually vary things a bit and is a great Power-Pop tune. But the ghost of electricity howls through it and vibrates at a harmonic frequency. It actually boogies a little to Bolan and T-Rex. This is my disease/ Every night I hear voices in my sleep/ I’m haunted by a melody. It’s alright. You can let it in.

Power-Pop on Little Pieces too. Drums kick this one along. Change in tempo at the bridge and then a little bit of The Jam’s In the City. Therefore, the Who buried deep in the soul of Bob.

Password to my Soul is a great title. Again, the guitars surf in propelled by high-energy waves as starbursts of melodic riffs illuminate briefly.

We finally get to The Ocean. It’s Folk with acoustic guitar and the anger has settled with a quiet understated vocal. Slowly the purple electric energy rises again and enters smoothly to ride the song.

Now the opening song sounds like a reprise as the curtain is drawn again. Covered in ashes and flames/ Keep denying the winds of climate change.

This is American Music as much as the classic Blaster’s song. It draws on deep wells of endless spirit. While Mould’s anger rages to incandescence, the music is also cathartic. On the list for one of the year’s best.