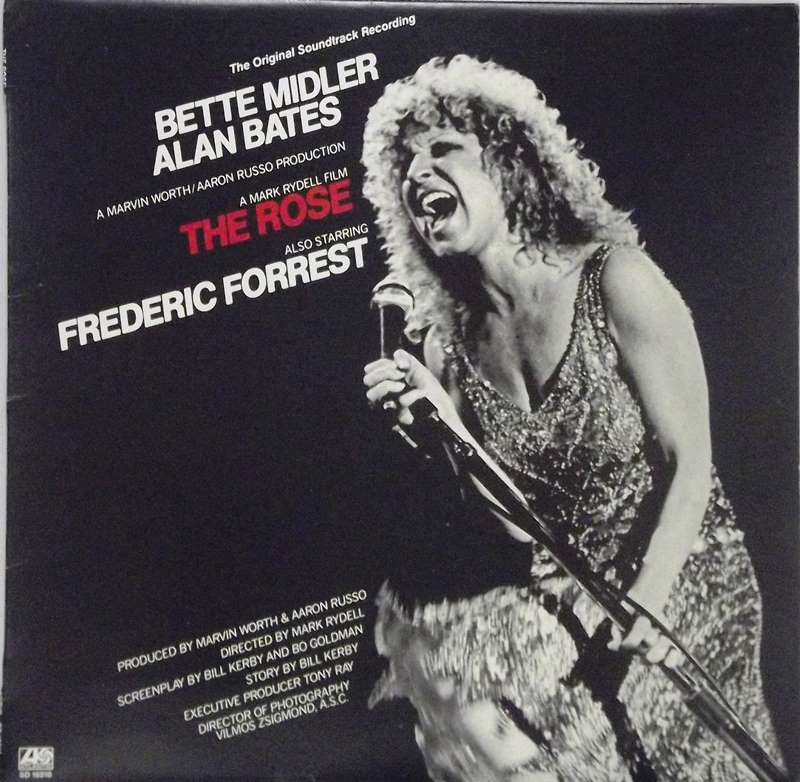 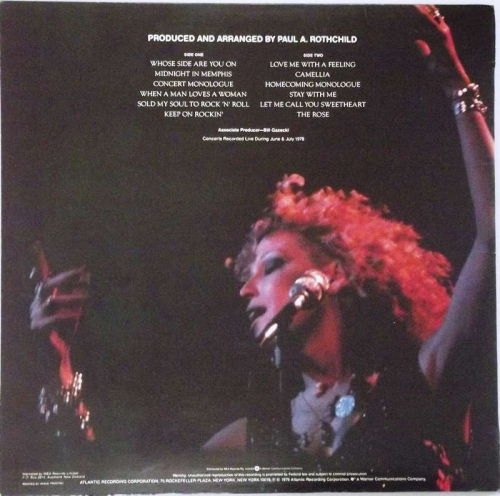 Paul A. Rothchild produced the final Janis Joplin studio album, Pearl, as well as many a Doors disc, and the late producer was the perfect guy to tackle this tribute to Joplin featuring "The Divine Miss M" as "Pearl"/"The Rose." In March of 1980, the version of "When a Man Loves a Woman" from this 1979 film soundtrack went Top 35, and Midler's biggest hit followed her Oscar nomination, but it was a well-produced version of the title track, different from the album, which went Top Three, the gold single the biggest of her six hits up to this point in time. It's a strange twist of events, Bette's previous 1979 album, Thighs and Whispers, has technically better sounds, Arif Mardin drenching it in the disco of the day, but that artificial episode pales next to this project, which features Lou Reed's "Rock 'n' Roll Animal" bandmates guitarist Steve Hunter and drummer Whitey Glan. The concerts were recorded live during June and July of 1978, and there's more than a touch of the Mitch Ryder sound on "Whose Side Are You On," the album opener. Hunter was in the Mitch Ryder band Detroit, which led up to Lou Reed's ensemble, so the level of authenticity goes far beyond what filmmakers put into, say, the Blues Brothers. They utilize a different set of musicians on "Love Me With a Feeling," the "Turtle Blues" of this story, vaguely referencing the original title to the Big Brother & the Holding Company album that tune came from with the "sex, drugs and rock & roll" chant. Bette Midler is a star perpetually evolving into icon, and this album's success, as well as the two hit singles it spawned, certainly helped the film, as much as the movie brought Midler to a new level of fame. Her voice is terrific on "Midnight in Memphis," and the material is extraordinary for many reasons. Midler gets to show what a tremendous blues singer she can be, drawing from the many elements she's secured from years on the stage. It's a pivotal moment in her career. The rendition of Genya Ravan's chestnut, "Stay With Me," penned by one of Joplin's favorite songwriters, producer Jerry Ragovoy, could have been the showstopper album track here. It isn't. The listener has to know the film in order to understand why the singer's voice is purposely falling apart. The strange twists of fate mentioned earlier appear again here -- the soundtrack to the Janis Joplin biography film contained studio versions of great live performances that are in the film; as Midler cut a different version of the title track,which became a number one adult contemporary hit and Top Three on the popular charts, "Stay With Me" also should have been re-recorded. Had Midler released a version of that tune with the same desperation and passions of "When a Man Loves a Woman," this LP might have had that so necessary third hit to catapult it into the record books. One of the best moments in the film is missing from this "soundtrack," the questionable move of leaving Bob Seger's "Fire Down Below" off of this disc. It's one of the most memorable moments in the film, tailor-made for MTV. Three years after this release, Bette Midler put another soundtrack out, Bette Midler in Divine Madness. The last two songs which end side two are actually "Fire Down Below" and "Stay With Me," and though Bette can't touch Genya Ravan's classic performance, this is still how the music should have been presented on The Rose soundtrack LP. It's hard to get too down on this record, though; it has the magic, it established Bette Midler to the larger audience she deserved, it brought Paul Rothchild the follow-up to Pearl he was cheated of by Joplin's death, and it rocks. The bluesy feel was a complete about face from the previous Thighs and Whispers, and, actually, it is truly Bette Midler's only real rock & roll album. That it did so much for her might suggest she try it again.