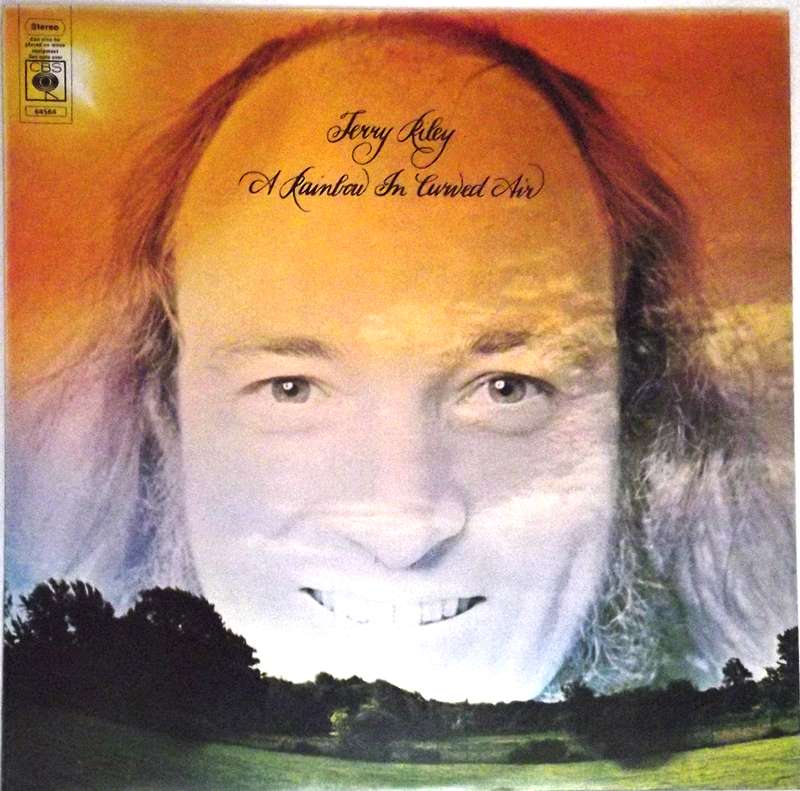 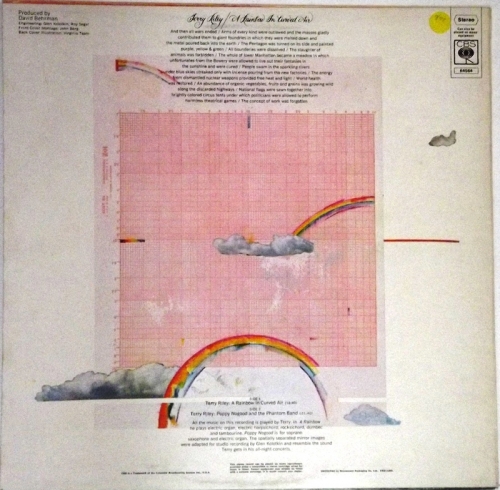 A Rainbow In Curved Air

A Rainbow in Curved Air is the third album by experimental music and classical minimalism pioneer Terry Riley. Through the use of overdubbing, the composer, a keyboard virtuoso, plays all the instruments on the title track: electric organ, electric harpsichord (Rock-Si-Chord), dumbec (or goblet drum), and tambourine.

The largely improvisational nature of the work, based on modal scales, owes much to jazz and Hindustani classical music. Some jazz musicians had explored overdubbing techniques before, notably Bill Evans, one of Riley's piano "heroes",[3] on his classic album Conversations with Myself from four years earlier, with its three piano tracks; but Riley uses a far wider range of instruments and colors.

Although continuous in form, A Rainbow in Curved Air can be seen as having three distinct sections or "movements," like a classical sonata or concerto. The first "fast" section gives way to a more contemplative "slow movement" at 6:39. Then, the final more rhythmic section begins at 11:41, dominated by the dumbec, which creates a parallel to how a tabla enters in the final section of a Hindustani raga. The work then ends abruptly.

The combination of the one-man-band overdubbing, electronic instruments, and improvisation made for a unique and influential recording, a defining psychedelic work of the 1960s, enhanced by its cover art and the peace poem that constitutes the liner notes.

The companion piece, which constituted the "B" side of the original album, is titled "Poppy Nogood and the Phantom Band." It also employs overdubbing, with Riley again playing all instruments, this time a soprano saxophone (inspired by the playing of John Coltrane)[4] and electric organ. In addition, Riley used a time lag accumulator, consisting of two tape machines, looped audio tape, and a patch cord (this is the "Phantom Band" of the title).[5] A note on the album explains that "The spatially separated mirror images were adapted for studio recording by Glen Kolotkin and resemble the sound Terry gets in his all-night concerts."

A reviewer for America has written that when he hears the album, "I am taken away to distant suns with psychedelic worlds. Colors explode and wash together in a maelstrom of unrestrained joy. I think of the persistent beats of distant pulsars guiding the way for a whole humanity reaching across the great expanse of space to discover places and ideas not yet even dreamed of in this world.".[6]

The album inspired Mike Oldfield's "Tubular Bells" and Pete Townshend's organ parts on The Who's "Won't Get Fooled Again" and "Baba O'Riley," the latter named in tribute to Riley and to Meher Baba.[7] A Rainbow in Curved Air has also had a significant impact on the developments of minimalism, ambient music, jazz fusion, new-age music, progressive rock, and subsequent electronic music. It foreshadows the later overdubbed instrumental works composed by Steve Reich. The 1970s progressive rock band Curved Air named itself after this album.[8] The album's title track is also featured in the video game Grand Theft Auto IV on the in-game radio station "The Journey." Some of the music on this album was used as the background accompaniment of The Guide in the original BBC Radio 4 series of The Hitchhiker's Guide to the Galaxy by Douglas Adams.

In 2009 the track "Poppy Nogood and the Phantom Band" featured in the BBC documentary Prog Rock Britannia: An Observation in Three Movements.

On April 26, 2007, Riley gave a live performance of A Rainbow in Curved Air (Revisited). Necessarily, he had to be assisted by other performers: Willi Wynant on percussion and Mikhail Graham working synthesizers and samples.[9]