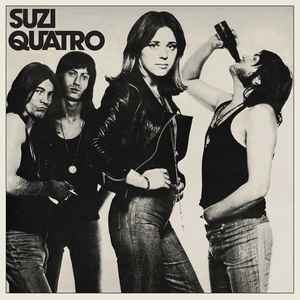 Suzi Quatro is the debut solo studio album by the American singer-songwriter and bass guitarist of the same name. The LP was originally released in October 1973, by the record label Rak in most territories. The album was released under Bell Records in the United States and Canada, EMI Records in Japan, and Columbia Records in some European countries. It was titled Can the Can in Australia.

The album was a critical and commercial success, achieving international popularity upon its release, reaching the top 50 in the charts in several territories, peaking at #32 in the UK album charts, #4 in Germany, #5 in the Netherlands, and #2 in Australia. The LP also achieved minor success in the United States, entering the top 150 in the charts there. The single "Can the Can", which was included on the album in most countries, became Quatro's most successful hit, reaching number one in the charts in several European countries and Australia, and had modest success in the US, peaking at 56 in the charts in 1976 when it was re-released in that country a few years later. The album also spawned her second single "48 Crash" which also achieved commercial success, reaching the top ten in several countries, including the UK where it went to number 3.

The Elvis Presley cover "All Shook Up" was given a limited release as a single in the United States, peaking at #85 on the Billboard Chart. Quatro would later claim that Presley himself contacted her and told her that her cover of his song was "the best since [his] own".