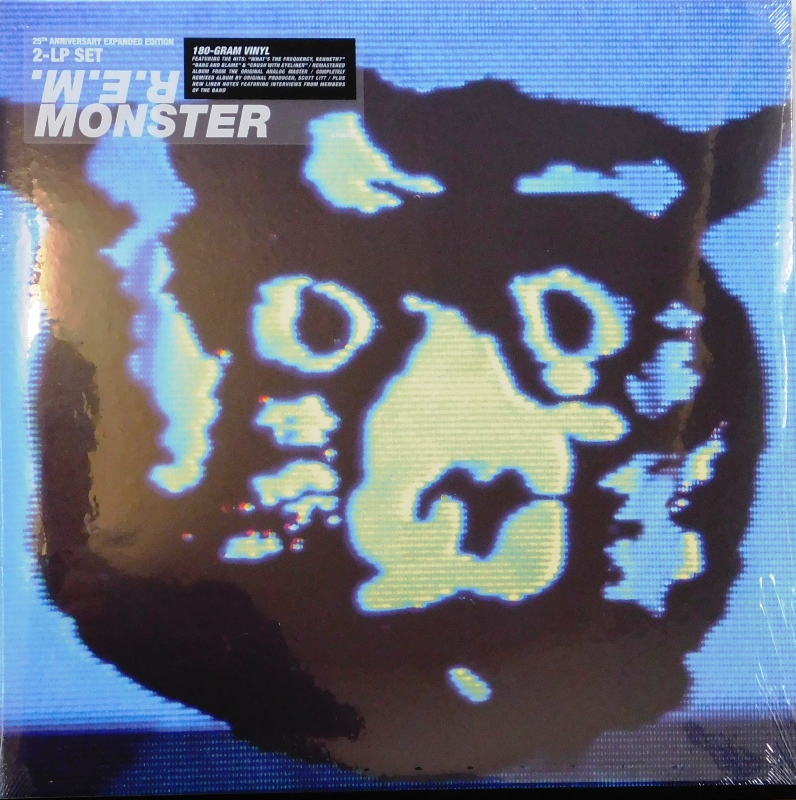 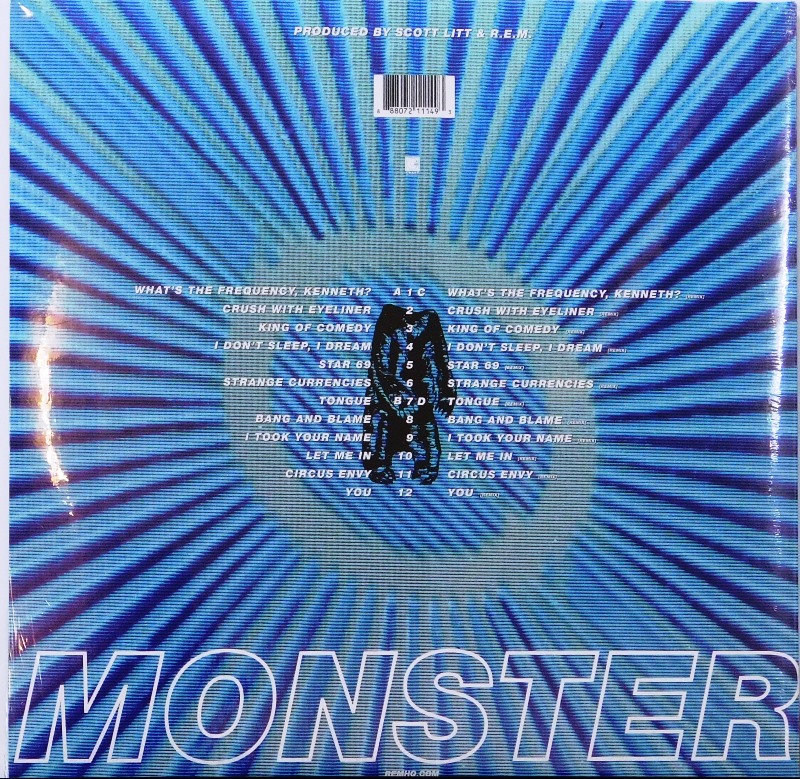 It’s hard to determine how Monster got this way and the demos included with this reissue aren’t edifying. The band declined to throw in any embryonic versions of songs that actually appear on the record; we’ll never know if or how “King of Comedy” was assembled piece-by-glitching-piece. Most of what is included isn’t even as heat-damaged as “Crush with Eyeliner” or “Circus Envy.” Instead, the demos here tend to be lost instrumentals and riffs for which Stipe never ended up writing lyrics. Some of them sound like instrumental sketches for an actual return-to-our-roots R.E.M. record—the comfortable jangle of the demo “Uptempo Ricky,” its bassline like a searchlight playing over introspective minor chords, could have resembled one of phantoms looming out of the mist on their debut album Murmur had it been completed and recorded by early-R.E.M. producers Don Dixon and Mitch Easter.

But the 1994 Monster as-released tends to outright reject R.E.M.’s past. It reaches beyond their own history, into darker, more seductive forms of rock’n’roll. They moved away from the punk and classic rock tropes that formed the gnarled sound of their younger grunge contemporaries, foraging for a more flexible style and manner of performance practiced by figures such as Marc Bolan, Lou Reed, and Iggy Pop: glam rock. Glam would allow R.E.M. to be loud and crude but in such a theatrically exaggerated way that the crudeness had double and triple meanings trailing like shadows behind it. It emphasized the primacy of image as well as its inherent artificiality, using empty-headed rock’n’roll as a vehicle for poetry and subversion. If R.E.M. had to be a popular rock band again, if they had to commit their ideas and performances directly to tape with minimal overdubs, they would also find a way to undercut the idea of a “popular rock band” at every turn of Monster, creating a record that has a simultaneously playful and hostile relationship to its own image.

Consider the music video for “What’s the Frequency, Kenneth?”, the first single from Monster. Stipe was popular enough at the time to be recognized on the street, but for the entire first verse of “Kenneth,” the band is filmed from the chin-down and anonymized. Even when we finally glimpse Stipe, debuting his newly-shaved head and wearing a green T-shirt with a small red star on it, the camera loses focus and lingers at senseless angles that fail to contain the band’s performance. It feels like we see more of the garage and the varicolored lighting they’re playing in than we ever see them. Just like the record, it’s very ridiculous and kind of pointless and all about its own ridiculousness and pointlessness, something “cool” that also deliberately indicates the quotation marks hovering around “cool.”

Buck described Monster in an interview as “the first record where we dare to be really dumb.” Stipe would also end up classifying Monster as obvious and silly, likely because, a few exceptions aside (“Stand,” “Shiny Happy People”), R.E.M. were used to making music that was oblique and shrouded in fog as a forest edge. Monster was far less guarded about what it was. Stipe came out as queer during the promotional roll-out for the record, and there’s a queerness to his presence throughout the record, an impish unreadability that morphs through different perspectives, as if coming out of the closet made him realize there were whole new sequences of closets to tumble through.

As he tried to fit words to the increasingly bent and echoey sounds coming out of Buck’s amp, Stipe began to write in character. The characters that populate Monster are like funhouse mirror warpings of the self, appearing at times larger than life—the narrator of “I Took Your Name” is Satan—and at others frail and distended as an insect, as on “Tongue,” where Stipe sings in falsetto to convey the perspective of a woman who knows she’s being used for sex. “King of Comedy” unreels like the mission statement of a particularly un-self-aware advertising executive, exploiting everything imaginable for whatever money can be harvested from it. “Make it charged with controversy,” Stipe sings, underlining the constant flow of sex and capital with something like a smirk, “I’m straight I’m queer I’m bi.”

That lyric, incidentally, is almost inaudible in the original mix of the record. For the reissue, producer Scott Litt, always dissatisfied with his initial mix, decided to clear away the woolen guitar overdubs that clotted over Stipe’s voice and raise its volume across the record. Stipe’s voice is uncannily clear at this altitude, shrugging off all of its old echoes like loose clothing. “Star 69” reveals itself as a song about some kind of telephonic extortion revolving around burning down a warehouse for the insurance money, though arguably the original mix better reflects the song’s plot by having Stipe’s voice quadrupled so it resembles a network of conspiratorial echoes.

The instrumental shifts in Litt’s remix are, at best, pointlessly diverting, like the little Polynesian auroras of guitar he places underneath the chords of “Crush with Eyeliner,” making it the closest R.E.M. have approached surf rock. But at worst, Litt’s remix can be clueless and distracting—and it’s often both. Removing the shimmer of tremolo from the chorus of “What’s the Frequency, Kenneth?” erases one of the band’s most compelling hooks. “King of Comedy”’s remix reveals that it was only a coherent song by the grace and economy of Litt’s original mix; the new version sounds like it’s been sunk underwater and is short-circuiting. And the overwhelming guitar distortion that papered “Let Me In” like wet leaves, Litt mutes and decompresses, giving a song that once seemed like it was drowning in the rain of its own grief the naked and unfinished quality of a demo.

What Litt misunderstands about Monster is that the inescapable excess of Buck’s guitar tone as well as the slipperiness of Stipe’s vocals are what make the record special; when you invert these effects, it starts to be indistinguishable from any other R.E.M. record. Monster is supposed to be brazenly proud of how alien and strange it is, the kind of record that would find it hilarious and Warholian that it was resold so many times to record stores that it became a near-worthless object. It can’t be defined, down to the album’s title, slippery as a shadow lurking in the background of a horror movie, elusive, gone as soon as it’s recognized. It’s like a Cheshire cat as a rock record, always shapeshifting around a fixed and somewhat sinister grin, saying true things with an ironic uncertainty and saying ironic things as if they were absolutely true. It’s just like Stipe sings in “King of Comedy”: “You can lie as long as you mean it.”