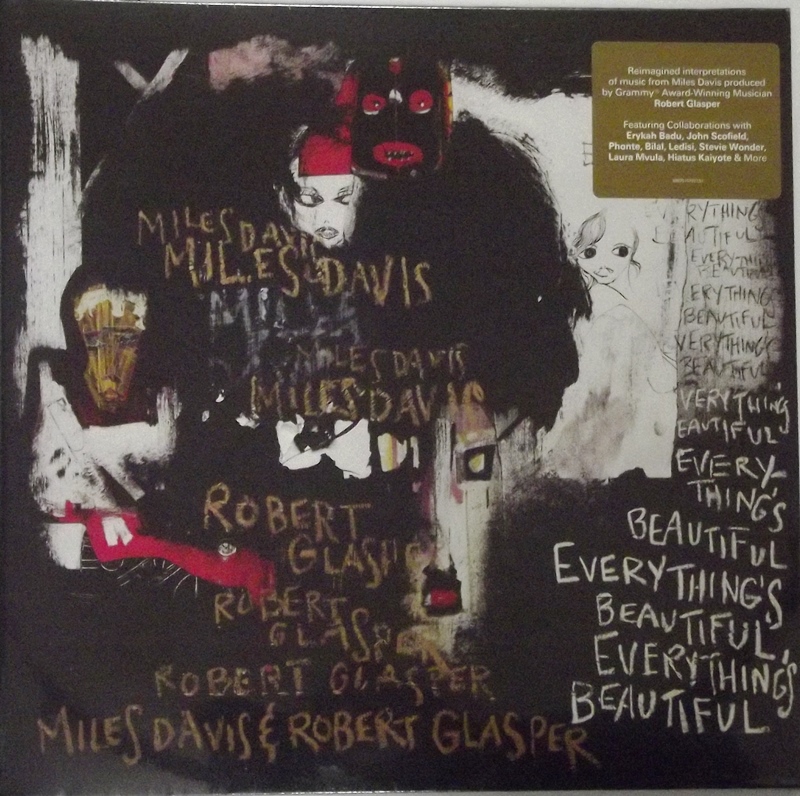 Sealed brand new release of this iconic album housed in a gatefold cover. Made in the EU.

Everything's Beautiful isn't quite a tribute or a remix project. It's not a collaboration between Miles Davis and Robert Glasper, as it is billed. On the surface, from a stylistic standpoint and in terms of personnel, it is closer to a sequel to Black Radio Recovered. Predominantly relaxed and rather ethereal, richly layered yet not quite psychedelic, and rhythmically hip-hop more than anything else, the two releases feature much of the same production and vocal lineup, including Glasper and partner Jewels, Georgia Anne Muldrow, 9th Wonder, and Bilal and Phonte. Likenesses to Black Radio Recovered notwithstanding, this should be taken on its on own terms. Issued the day after Davis would have turned 90, less than two months after the release of Don Cheadle's Miles Ahead -- for which Glasper co-produced the soundtrack and provided the score -- Everything's Beautiful was marketed as "reimagined interpretations." Sony's catalog division had sought Glasper for remixes, but the keyboardist countered with the concept of making new material out of Davis' multi-track Columbia recordings. He and his extended cast of associates were granted access to all of it, even studio chatter, amusingly laced through "Talking Shit," an intro sourced from sessions for three LPs. Glasper plays on five cuts, soloing only on the animated Muldrow collaboration "Milestones." Among the remaining six are essentially new recordings by Hiatus Kaiyote, King, and Ledisi with 1982-1985 Davis guitarist John Scofield, some of which don't involve Glasper on production, either. Bill Evans' piano from "Blue in Green," as heard on 9th Wonder and Phonte's "Violets," and Davis' trumpet from "Maiysha," are among the more familiar elements. The latter arrives during Erykah Badu's bossa nova vocalese version of the same-titled song, one of the album's most creative moments. At times, Davis' presence is inconspicuous. There's only one instance, where a typically raspy exclamation is repetitiously inserted hype-man (Sen Dog) style, where it's truly jarring. Considering the disparate source material and the quantity of vocalists, instrumentalists, and producers involved, it's remarkable how smoothly the album flows from one track to the next. Unsurprisingly, it's most appealing to fans of Glasper and those he involved. As the keyboardist states in the liner notes, "To me, the best way to show gratitude is to show how you've been inspired by someone: 'Hey man, I wrote this song because of you!' Not, 'Hey, I'm playing your tune.'"