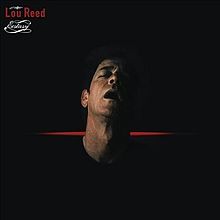 Ecstasy is the eighteenth solo studio album by American musician Lou Reed, released in 2000. It is a concept album about Reed's personal experiences with marriage and relationships and is his final rock album that is not a collaboration.[8]

Robert Christgau thought highly of the album, writing, "If his solo career produced a masterwork on the scale of whatever VU album you prefer, this de facto farewell is it."[8] On an episode of Spectacle: Elvis Costello with... featuring Lou Reed and Julian Schnabel as the guests, Schnabel recites the entirety of "Rock Minuet", citing it as one of his favorite Reed songs.