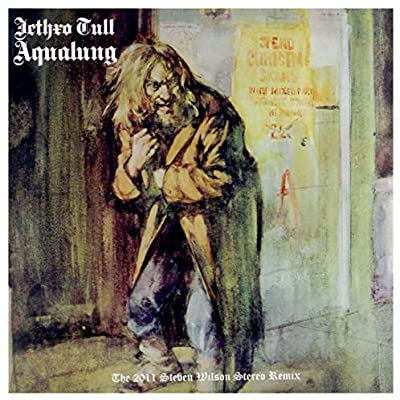 Aqualung is the fourth studio album by the rock band Jethro Tull. Released in 1971, Aqualung, despite the band's disapproval, is regarded as a concept album featuring a central theme of "the distinction between religion and God".[2] The album's "dour musings on faith and religion" have marked it as "one of the most cerebral albums ever to reach millions of rock listeners".[1] Aqualung‍‍ '​‍s success marked a turning point in the band's career, who went on to become a major radio and touring act.

Recorded at Island Records' studio in London, it was their first album with John Evan as a full-time member, their first with new bassist Jeffrey Hammond and last album featuring Clive Bunker on drums. Something of a departure from the band's previous work, the album features more acoustic material than previous releases; and—inspired by photographs of homeless people on the Thames Embankment taken by singer Ian Anderson's wife Jennie—contains a number of recurring themes, addressing religion along with Anderson's own personal experiences.

Aqualung has sold more than 7 million units worldwide according to Anderson, and is thus Jethro Tull's best selling album. The album was generally well-received critically, and has been included on several music magazine best of lists. The album spawned one single, "Hymn 43".