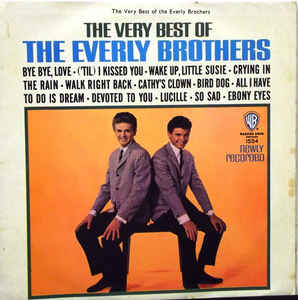 The Very Best Of The Everly Brothers

There are few sounds in American popular music more thrilling and sublimely satisfying than the harmonies of Don and Phil Everly, the Everly Brothers, and this album features them singing a dozen great songs that have come to be associated with them. So what's the problem? Between 1957 and 1960, the Everly Brothers recorded for Cadence Records, where they enjoyed a run of hits with such songs as "Bye Bye Love," "Wake Up Little Susie," "All I Have to Do Is Dream," "Bird Dog," "Til I Kissed You," and "Devoted to You." In 1960, Don and Phil left Cadence for a more lucrative deal at Warner Bros. Records, where they continued to score hit records. However, when Warner Bros released The Very Best of the Everly Brothers in 1964, rather than focusing entirely on their post-'60s hits or licensing the original Cadence recordings, the Everlys were sent into the studio to re-record the six early hits listed above. The new versions aren't at all bad, and the arrangements follow the pattern of the originals closely, but the simple fact is you can't improve on perfection, and the re-cuts lack the magic of the originals. Just as importantly, the new versions lack a bit of the ineffable innocence of their Cadence sessions; after seven very busy years in the record business, "Bye Bye Love" simply didn't sound as simple or as sorrowful as it did when they still had a lot to learn about life. The six Warner Bros hits included in this album are, of course, presented in their original recordings, and "Cathy's Clown," "Crying in the Rain" and "Walk Right Back" rank with the duo's finest work, but when the cover says this represents The Very Best of the Everly Brothers, that description is only half right.