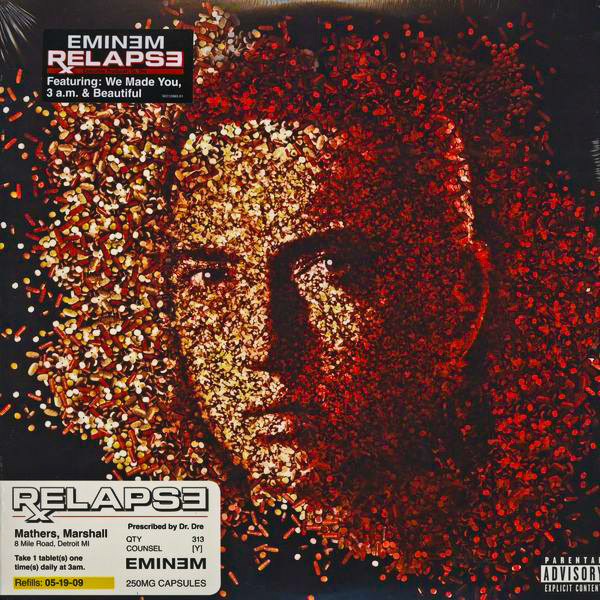 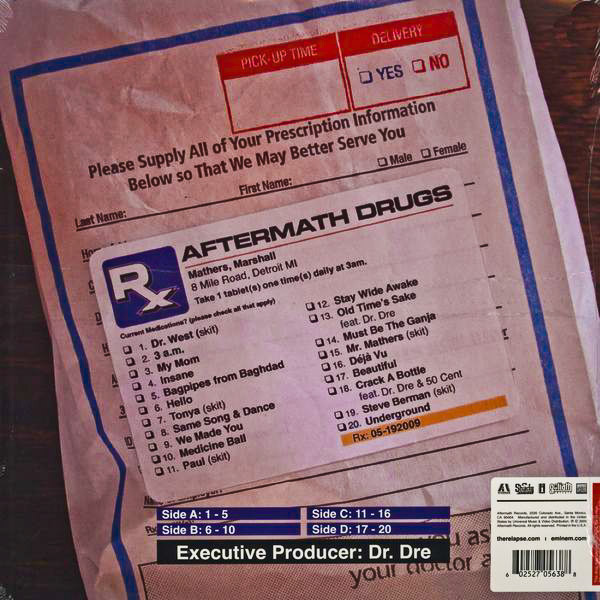 Relapse is the sixth studio album by American rapper Eminem. It was released on May 19, 2009, through Aftermath Entertainment, Shady Records, and Interscope Records. It was his first album of original material since Encore (2004), following a four-year hiatus from recording due to his writer's block and an addiction to prescription sleeping medication. Recording sessions for the album took place during 2008 to 2009 at several recording studios, and Dr. Dre, Mark Batson, and Eminem handled production.

Relapse is a concept album that revolves around horror, drug rehabilitation and relapse. A return of his Slim Shady alter ego, Eminem stated that the album's theme was more reminiscent of The Slim Shady LP (1999) and The Marshall Mathers LP (2000).[4] In September 2007, Dr. Dre stated his intention to dedicate two months to the production of the album.[5] Working with Dr. Dre allowed Eminem to pick the beats from Dr. Dre's catalog that challenged his rhythm to experiment with different flows.[6] During the recording period, a handful of songs intended for Relapse were leaked on the Internet.[7]

One of the most anticipated albums of 2009, Relapse debuted at No. 1 on the Billboard 200, selling 608,000 copies in its first week.[8] It also reached number one in twelve other countries. It produced four singles: "Crack a Bottle", "We Made You", "3 a.m.", and "Beautiful", as well as the promotional single: "Old Time's Sake". "Crack a Bottle", featuring Dr. Dre and 50 Cent, reached number one on the Billboard Hot 100. Relapse was certified double platinum by the Recording Industry Association of America (RIAA).

Critically, the album received mixed reviews. Reviewers generally praised its production, but were divided in their responses towards the writing and overuse of accents throughout the album. Nonetheless, it won Eminem the Grammy Award for Best Rap Album, while "Crack a Bottle" won for Best Rap Performance by a Duo or Group. The album later found a strong cult following among Eminem's fans and critics, establishing Relapse as a cult classic.