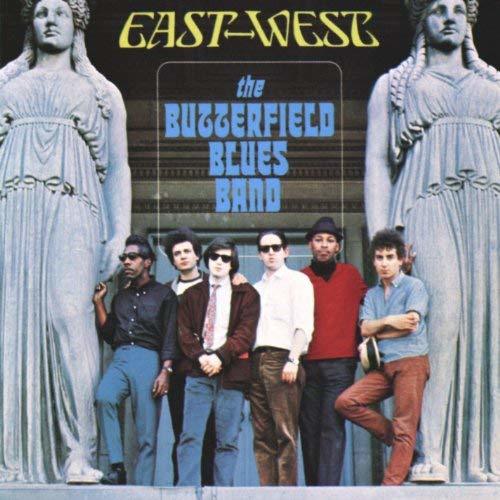 East-West is the second album by The Butterfield Blues Band led by Paul Butterfield, released in 1966 on Elektra Records, EKS 7315 in stereo, EKL 315 in mono. It was recorded at the famed Chess Studios on 2120 South Michigan Avenue in Chicago. It peaked at #65 on the Billboard pop albums chart, but is regarded as highly influential by rock and blues music historians.

Like the band's eponymous record debut, The Paul Butterfield Blues Band, this album features traditional blues covers and the guitar work of Mike Bloomfield and Elvin Bishop. Unlike the debut album, Bishop also contributed guitar solos; drummer Sam Lay had left the band due to illness and was replaced by the more jazz-oriented Billy Davenport.[2] The social complexion of the band changed as well; ruled by Butterfield in the beginning, it evolved into more of a democracy both in terms of financial reward and input into repertoire.[3]

One result was the inclusion of two all-instrumental extended jams at the instigation of Bloomfield following the group's successful appearance at The Fillmore in San Francisco during March alongside Jefferson Airplane.[4] Both reflected his love of jazz, as the blue note-laden "Work Song" featuring harmonica by Butterfield had become a hard bop standard, and the title track "East-West" used elements of modal jazz as introduced by Miles Davis on his ground-breaking Kind of Blue album. Bloomfield had become enamored of work by John Coltrane in that area, especially his incorporation of ideas from Indian raga music.[5] The album also included Michael Nesmith's song "Mary, Mary," which Nesmith would soon record with his band The Monkees - although original pressings of East-West did not include a songwriter's credit for this track.

On October 29, 2001, a reissue of this album remastered by Bob Irwin at Sundazed Studios and coupled with the debut appeared on Rhino WEA UK for the European market.